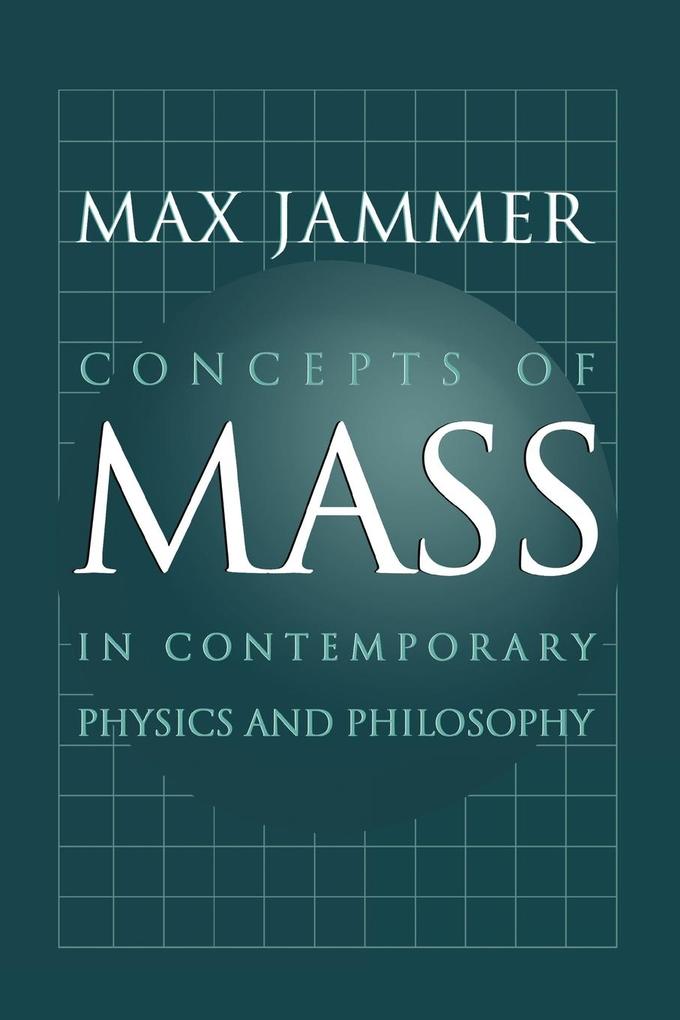 Concepts of Mass in Contemporary Physics and Philosophy

von Max Jammer
Paperback. Sprache: Englisch.
Buch (gebunden)
The concept of mass is one of the most fundamental notions in physics, comparable in importance only to those of space and time. But in contrast to the latter, which are the subject of innumerable physical and philosophical studies, the concept of ma … weiterlesen
Dieser Artikel ist auch verfügbar als:
Geschenk per Mail versenden
Buch (gebunden)

The concept of mass is one of the most fundamental notions in physics, comparable in importance only to those of space and time. But in contrast to the latter, which are the subject of innumerable physical and philosophical studies, the concept of mass has been but rarely investigated. Here Max Jammer, a leading philosopher and historian of physics, provides a concise but comprehensive, coherent, and self-contained study of the concept of mass as it is defined, interpreted, and applied in contemporary physics and as it is critically examined in the modern philosophy of science. With its focus on theories proposed after the mid-1950s, the book is the first of its kind, covering the most recent experimental and theoretical investigations into the nature of mass and its role in modern physics, from the realm of elementary particles to the cosmology of galaxies.

The book begins with an analysis of the persistent difficulties of defining inertial mass in a noncircular manner and discusses the related question of whether mass is an observational or a theoretical concept. It then studies the notion of mass in special relativity and the delicate problem of whether the relativistic rest mass is the only legitimate notion of mass and whether it is identical with the classical (Newtonian) mass. This is followed by a critical analysis of the different derivations of the famous mass-energy relationship E = mc2 and its conflicting interpretations. Jammer then devotes a chapter to the distinction between inertial and gravitational mass and to the various versions of the so-called equivalence principle with which Newton initiated his Principia but which also became the starting point of Einstein's general relativity, which supersedes Newtonian physics. The book concludes with a presentation of recently proposed global and local dynamical theories of the origin and nature of mass.

Destined to become a much-consulted reference for philosophers and physicists, this book is also written for the nonprofessional general reader interested in the foundations of physics.

Max Jammer, born in Berlin, Germany, is Research Professor of Physics at Bar-Ilan University, where he was formerly President and Rector. His books, translated into many languages, include "Concepts of Space" (with a foreword by Albert Einstein), "The Conceptual Development of Quantum Mechanics, The Philosophy of Quantum Mechanics", and, most recently, "Einstein and Religion" (Princeton). Among the awards he has received are the Israel Prize and the Monograph Prize of the American Academy of Arts and Sciences.

"The book reads likes an engaging, well-planned lecture, with many a historical aside and opinionated excursion."--Publishers Weekly "A valuable and badly needed account that manages to be undogmatic, comprehensive and accessible... I can strongly recommend this beautifully written and accessible book."--Andrew Pinsent, Physics World "An interesting and stimulating mix of physics and philosophical issues...Jammer has produced a fascinating look into the nature of a quantity that most of us take for granted ... and its also fun to read."--Barry R. Holstein, American Scientist "[Jammer's] contributions to the conceptual foundations of physics have been, and continue to be, both fruitful and enlightening."--Jonathan Bain, Physics Today