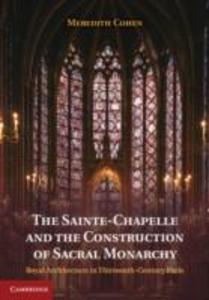 The Sainte-Chapelle and the Construction of Sacral Monarchy

This book offers a novel perspective on one of the most important monuments of French Gothic architecture, the Sainte-Chapelle, constructed in Paris by King Louis IX of France between 1239 and 1248 especially to hold and to celebrate Christ's Crown of Thorns. Meredith Cohen argues that the chapel's architecture, decoration, and use conveyed the notion of sacral kingship to its audience in Paris and in greater Europe, thereby implicitly elevating the French king to the level of suzerain, and establishing an early visual precedent for the political theories of royal sovereignty and French absolutism. By setting the chapel within its broader urban and royal contexts, this book offers new insight into royal representation and the rise of Paris as a political and cultural capital in the thirteenth century.

1. The making of a royal city: Paris and the architecture of Philip Augustus; 2. The Sainte-Chapelle: Parisian Rayonnant and the new royal architecture; 3. The architecture of sacral kingship; 4. Private, public, and the promotion of the cult of kings; 5. Louis' later patronage in Paris; Conclusion; Appendices.

Meredith Cohen is Assistant Professor of Art History at the University of California, Los Angeles. She specializes in the art, architecture, and urban development of high medieval Europe, particularly in France and England. She has published articles on the Sainte-Chapelle, the Court Style, medieval Paris, nineteenth-century restoration, and the historiography of Gothic architecture. In addition, she has edited a series of interdisciplinary volumes on medieval history and culture. In 2010, she curated an exhibition (with Xavier Dectot) on medieval Paris at the Musée national du Moyen Âge. She has received fellowships and grants from the British Academy, the Châteaubriand Foundation, the Société des Professeurs de Français et Francophones d'Amérique, the Whiting Foundation, and UCLA for her research. Cohen is the founder and was the first president of the International Medieval Society of Paris, an interdisciplinary scholarly society based in Paris.

Schreiben Sie eine Bewertung für: The Sainte-Chapelle and the Construction of Sacral Monarchy