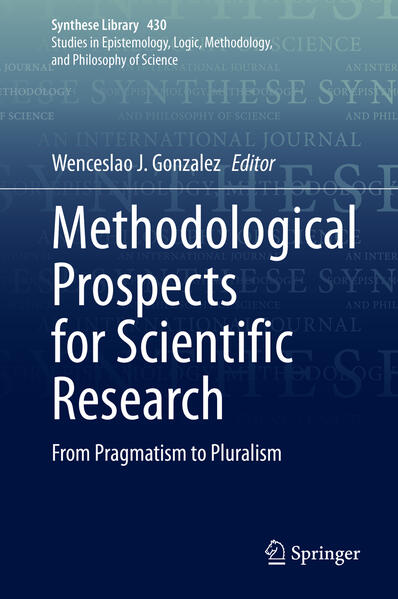 From Pragmatism to Pluralism. 1st ed. 2020. Sprache: Englisch.
Buch (gebunden)
This book highlights the existence of a diversity of methods in science, in general, in groups of sciences (natural, social or the artificial), and in individual sciences. This methodological variety is open to a number of consequences, such as the d … weiterlesen
Geschenk per Mail versenden
Buch (gebunden)

This book highlights the existence of a diversity of methods in science, in general, in groups of sciences (natural, social or the artificial), and in individual sciences. This methodological variety is open to a number of consequences, such as the differences in the research according to levels of reality (micro, meso and macro), which leads to multi-scale modelling and to questioning fundamental parts in the sciences, understood as the necessary support for the whole discipline. In addition, this volume acknowledges the need to assess the efficacy of procedures and methods of scientific activity in engendering high quality results in research made; the relevance of contextual factors for methodology of science; the existence of a plurality of stratagems when doing research in empirical sciences (natural, social and of the artificial); and the need for an ethical component while developing scientific methods, because values should have a role in scientific research. The book is of interest to a broad audience of philosophers, academics in various fields, graduate students and research centers interested in methodology of science.

Methodological Alternatives to Reductionism, Monism and UniversalismWenceslao J. GonzalezPart I: A New Framework for Methodological Prospects to Scientific ResearchLevels of Reality, Complexity, and Approaches to Scientific MethodWenceslao J. GonzalezMultiscale Modeling: Explanation and EmergenceRobert W. BattermanPart II: Pragmatist Approaches to Methodology of ScienceMethodological PragmatismNicholas RescherMethodological Incidence of the Realms of Reality: Prediction and ComplexityAmanda GuillanPart III: Contextual Factors for Methodology of ScienceInformation and Pluralism: Consequences for Scientific MethodGiovanni CamardiThe Methodology of Theories in Context: The Case of Economic ClusteringCatherine Greene and Max SteuerPart IV: Methodological Pluralism in Natural Sciences and Sciences of the ArtificialPlurality of Explanatory Strategies in Biology: Mechanisms and NetworksAlvaro MorenoScientific Prediction and Prescription in Plant Genetic improvement as an Applied Science of Design: The Natural and the ArtificialPedro Martínez GómezPart V: Methodological Pluralism in Social Sciences and Ethical ValuesChallenges to Validity from the Standpoint of Methodological Pluralism: The Case of Survey Research in EconomicsMaría CaamañoEconomic Method and its Ethical Component: Pluralism, Objectivity and Values in Amartya Sen s ModelAlessandra Cenci

Wenceslao J. Gonzalez is Professor of Logic and Philosophy of Science (University of A Coruña). He is a Full Member of the Académie International de Philosophie des Sciences/International Academy for Philosophy of Sciences. He has been a Team Leader of the European Science Foundation program entitled The Philosophy of Science in a European Perspective (2008-2013). He has been named a Distinguished Researcher by the Main National University of San Marcos in Lima (Peru). He has been a member of the National Committee for Evaluation of the Scientific Activity of Spain. Gonzalez has been a visiting researcher at the Universities of St. Andrews, Münster and London (LSE, CPNSS), as well as Visiting Fellow at the Center for Philosophy of Science and Visiting Scholar of the Department of Philosophy (U. Pittsburgh). He has given lectures at the Universities of Pittsburgh, Stanford, Quebec in Montreal, Helsinki and Nevada at Reno. The conferences in which he has participated include those organized by the Universities of Uppsala, New South Wales, Bologna, Canterbury (NZ), Vienna, Beijing, Harvard and Boston. He received the Research Award in Humanities given in 1995 by the Autonomous Community of Galicia (Spain). He was President of the Committee of Doctoral Programs at the University of A Coruña (2002-2004). His publications include monographs such as Philosophico-Methodological Analysis of Prediction and its Role in Economics (Springer, 2015) and the edition of 40 volumes on philosophy of science, such as Bas van Fraassen s Approach to Representation and Models in Science (2014).
Kunden, die diesen Artikel gekauft haben, kauften auch