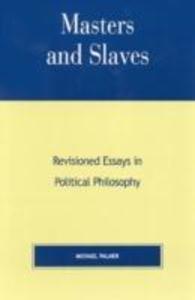 von Michael Palmer
New. Sprache: Englisch.
Buch (gebunden)
This collection of essays sheds light on the writings of leading figures in the history of political philosophy by exploring a range of questions concerning mastery and slavery in the human soul.

This collection of essays sheds light on the writings of leading figures in the history of political philosophy by exploring a range of questions concerning mastery and slavery in the human soul.

Chapter 1 Mastering Slaves or Mastering Science?: An Aristotelian Reprise Chapter 2 Kings, Philosophers, and Tyrants in Plato's Republic Chapter 3 Alcibiades and the Question of Tyranny in Thucydides Chapter 4 Thucydides on Ambition to Rule Chapter 5 Machiavellian virtu and Thucydidean arete: Moderation and the Common Good Chapter 6 Machiavelli's Inhuman Humanism in The Prince Chapter 7 The Master Fool: The Conspiracy of Machiavelli's Mandragola Chapter 8 Hobbesian and Thucydidean Realism Chapter 9 The Citizen Philosopher: Rousseau's Dedicatory Letter to the Discourse on Inequality Chapter 10 On Leo Strauss's Jerusalem and Athens Chapter 11 On George Grant's English-Speaking Justice Chapter 12 On Allan Bloom's The Closing of the American Mind

Michael Palmer is Professor of Political Science at the University of Maine. He is the author of Love of Glory and the Common Good: Aspects of the Political Thought of Thucydides (1992), and coeditor of Political Philosophy and the Human Soul: Essays in Memory of Allan Bloom (with Thomas L. Pangle).

Building upon and branching out from his searching and insightful work on Thucydides, Michael Palmer here offers a series of wide-ranging essays on ancient and modern philosophy. The highlight of the book is a set of essays on Machiavelli, including a penetrating analysis of Mandragola that freshly illuminates the Italian philosopher's achievement as a dramatist. -- Paul Cantor, University of Virginia This edition of Michael Palmer's essays is a very welcome publishing event. Ranging from the political thought of the ancients to that of the moderns, Palmer's touch is sure. All serious political theorists will want this book on their shelf. -- Jean M. Yarbrough, Bowdoin College Michael Palmer is one of the most successful teachers of political philosophy in North America today. This collection of his essays shows why. Palmer ranges over the entire history of political thought, combining careful scholarship with trenchant analysis, shedding clear new light on perennial texts and perennial problems. -- Clifford Orwin, University of Toronto The incisive little summary diagnosis of The Prince, by itself, apart from the other gems, makes Palmer's a book to have. -- Robert Faulkner, Boston College Ranging with graceful erudition and lively intelligence over major figures in the history of political thought from Aristotle to the present, this is a collection of illuminating interpretive studies that will richly reward both students and scholars. -- Thomas L. Pangle, University of Toronto