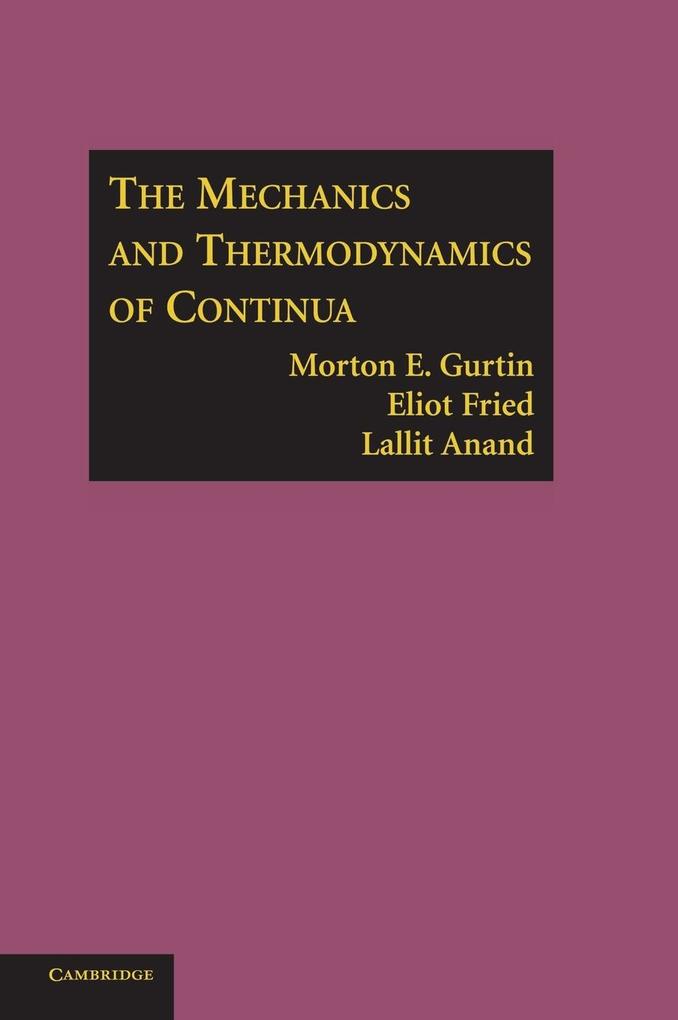 The Mechanics and Thermodynamics of Continua

A discussion of continuum mechanics which uniquely includes thermodynamics for engineering graduate students.

Morton E. Gurtin is the Alumni Professor Emeritus of Mathematics at Carnegie Mellon University. His research concerns nonlinear continuum mechanics and thermodynamics, with recent emphasis on applications to problems in materials science. Among his many awards are the 2004 Timoshenko Medal of the American Society of Mechanical Engineers (ASME) 'in recognition of distinguished contributions to the field of applied mechanics'; the Agostinelli Prize (an annual prize in pure and applied mathematics and mathematical physics); Accademia Nazionale dei Lincei, Italy; Dottore Honoris Causa, Civil Engineering, University of Rome; Distinguished Graduate School Alumnus Award, Brown University; and the Richard Moore Education Award, Carnegie Mellon University. In addition to his numerous archival research publications, Professor Gurtin is the author of Configurational Forces as Basic Concepts in Continuum Physics, An Introduction to Continuum Mechanics, Thermomechanics of Evolving Phase Boundaries in the Plane, Topics in Finite Elasticity, The Linear Theory of Elasticity, Handbuch der Physik, Volume VIa/2, and Wave Propagation in Dissipative Materials (with B. D. Coleman, I. Herrera, and C. Truesdell). Elliot Fried is a Professor of Mechanical Engineering at McGill University. Lallit Anand is the Esther and Harold E. Edgerton Professor of Mechanical Engineering at MIT and a Fellow in the ASME. Professor Anand has had more than thirty years of experience working in industry, academia, and government. He began his career in the Mechanical Sciences Division of the Fundamental Research Laboratory (Bain Laboratory) of U.S. Steel Corporation, and he served successively as Research Scientist and Senior Research Scientist until he joined the MIT faculty. Among his many contributions and honors are his service as the Program Director for the Mechanics and Materials Program, as well as the Manufacturing Processes Program, in the Engineering Directorate of the National Science Foundation. He was awarded the Eric Reissner Medal for outstanding contributions to the field of mechanics of materials from the International Society for Computational Engineering and Sciences and the Khan International Medal from the International Journal of Plasticity for outstanding lifelong contributions to the field of plasticity. Anand was also Southwest Mechanics Series Lecturer (1992); Schmiedeshoff Lecturer in Mechanics of Materials, RPI (1992); and Clark B. Millikan Visiting Professor at Caltech (2004). Anand is the author of numerous archival publications of his research in mechanics and materials, specifically solid mechanics, materials science, computational mechanics, plasticity, and fracture.