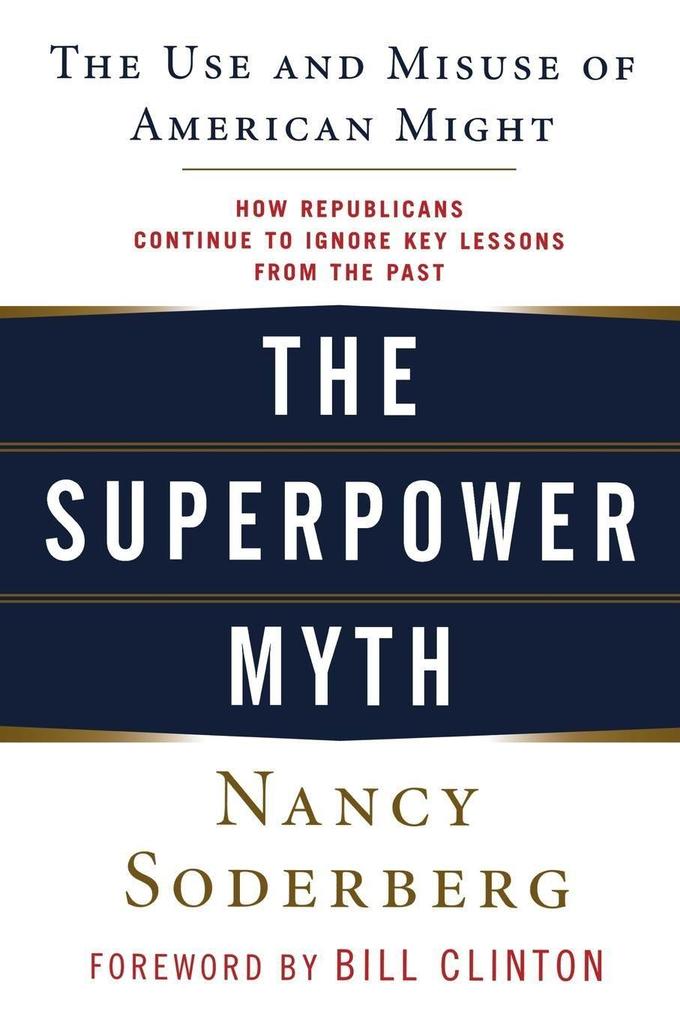 The Superpower Myth: The Use and Misuse of American Might

von Nancy Soderberg
Sprache: Englisch.
Buch (gebunden)
"For eight years, Nancy Soderberg served with distinction and creativity at the highest levels of American government. She is uniquely positioned to explain how the world works in this new era-and when it s in danger of breaking down." -Dr. Madeleine … weiterlesen
Dieser Artikel ist auch verfügbar als:
Geschenk per Mail versenden
Buch (gebunden)

Titel: The Superpower Myth: The Use and Misuse of American Might
Autor/en: Nancy Soderberg

"For eight years, Nancy Soderberg served with distinction and creativity at the highest levels of American government. She is uniquely positioned to explain how the world works in this new era-and when it s in danger of breaking down." -Dr. Madeleine K. Albright, former U.S. Secretary of State Are there limits to American power? The neoconservative brain trust behind the Bush administration s foreign policy doesn t seem to recognize any. For the first time, we have people in power who believe that as the world s reigning superpower, America can do what it wants, when it wants, without regard to allies, costs, or results. But as events in Iraq are proving, America may be powerful, but it is not all-powerful. In practice, no country could ever be strong enough to solve problems like Somalia, Kosovo, Afghanistan, and Iraq through purely military means. In the future, America s power will constantly be called up to help failed and failing states, and it is becoming clear that the complex mess of Somalia has replaced the proxy war of Vietnam as the model for what future military conflicts will look like: a failed state, a power vacuum, armed factions, and enough chaos to panic an entire region. Using vivid examples from her years in the White House and at the United Nations, Nancy Soderberg demonstrates why military force is not always effective, why allies and consensus-building are crucial, and how the current administration s faulty world view has adversely affected policies toward Israel, Iraq, North Korea, Haiti, Africa, and Al-Qaeda. Powerful, provocative, and persuasive, this timely book demonstrates that the future of America s security depends on overcoming the superpower myth.

Foreword by Bill Clinton. Acknowledgments. Introduction. 1. Things Fall Apart. 2. Crossing the Rubicon. 3. Go as Peacemakers. 4. Force and Diplomacy. 5. A Realistic Foreign Policy? 6. A New Breed of Terrorists. 7. The Myth of Invincibility. 8. Failure to Be on a War Footing. 9. Iraq: A Decade of Deceit. 10. The Hegemonsâ Failed Peace. 11. Are We Really Going to War? 12. The African Intervention Gap. 13. Winning the War on Terrorism. 14. Lessons for the President. Notes. Index.

NANCY SODERBERG was a senior foreign policy advisor to Bill Clinton from the 1992 campaign through the end of his second term. From 1993 to 1996, she was the third-ranking official at the National Security Council, and from 1997 to 2001, she was a U.S. ambassador to the United Nations. Soderberg is now a Vice President at the International Crisis Group, and she is regularly invited to comment on foreign policy issues for NPR, MSNBC, CNN, FOX News, the BBC, the Washington Post, and the New York Times.

Schreiben Sie eine Bewertung für: The Superpower Myth: The Use and Misuse of American Might