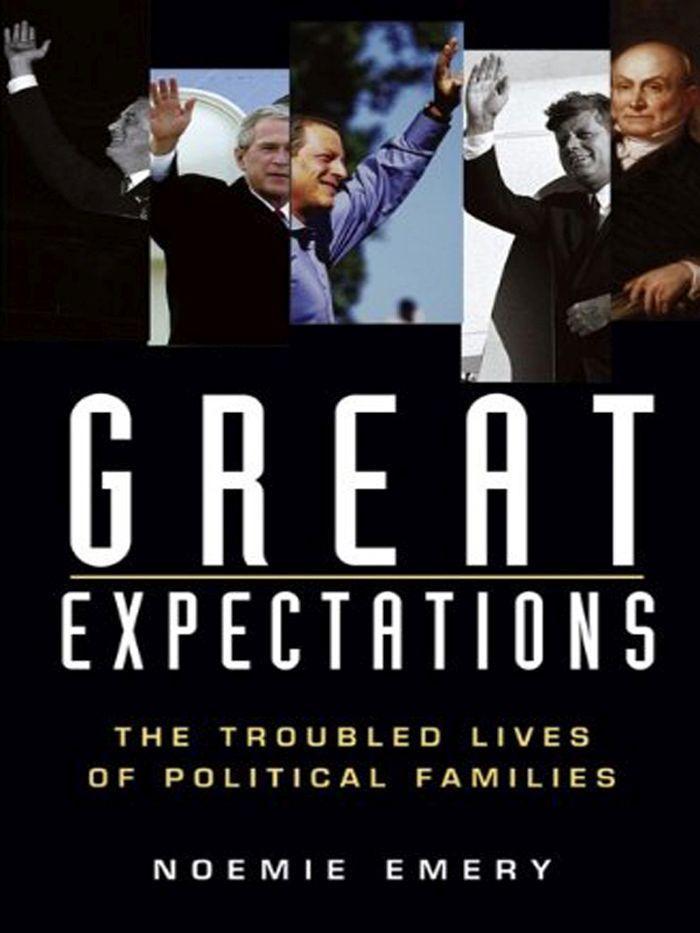 Advance Praise for Great Expectations "America's political dynasties from the Adamses to the Bushes have much in common--especially the pressure on favored heirs to become president. Noemie Emery, in Great Expectations: The Troubled Lives of Political Families, shows how these families have produced great leaders--and great heartaches and personal tragedies. Emery, as readers of her work know, has a cool skeptical eye but also a deep sympathy for those gifted--or cursed--with a political heritage." --Michael Barone, senior writer, U.S. News & World Report, and coauthor, The Almanac of American Politics "Often heart-rending, sometimes eye-popping, always fascinating--a superbly written account of some very surprising lives." --David Frum, author, The Right Man: An Inside Account of the Surprise Presidency of George W. Bush "Is it American politics, or is it Dynasty? How did we get a president who is the son of a president who might be succeeded by the wife of a president? In this sharp, immensely readable book, Noemie Emery spans American history to reveal the family dramas behind today's political blood feuds." --Byron York, White House correspondent, National Review, and author, The Vast Left Wing Conspiracy From the troubled Adams dynasty to the bitter presidential face-off between Bush and Gore family scions in 2000, political families in the United States have been pushing, prodding, and trying to shame their sons into power, with a marked effect on American history and an often devastating impact on personal lives. Spanning 230 years, these families have given us presidents, ambassadors, governors, and members of Congress. They have also spawned several suicides, numerous lives that were haunted or broken, more alcoholics and addicts than one can quickly enumerate, and a number of premature deaths. The successes were often outnumbered by failures, and sometimes the "wrong" son would rise. John and Abigail Adams-and John Quincy after them-wanted to produce great men and leaders, and did. They also produced four alcoholics, three of whom would die young. Everyone in Theodore Roosevelt's family-and much of the country-believed his first son and namesake would follow the path of his idolized father. But his claim was usurped by his fifth cousin, Franklin, who touched off a decades-long feud. Joe Kennedy Jr. defined the words "golden boy," propelled toward the White House from birth by his imperious, iron-willed father. But it was Jack, his shy, sickly, and overlooked younger brother who finally won it, after a difficult inner journey. Golden boys Jeb Bush and Al Gore, sons of ambitious political fathers, were seen in their school days as possible presidents (and might still someday face each other). But it was Jeb's brother George who began life at forty, becoming the first president's son since John Quincy Adams to follow his father in office and the first one to then win two terms. From the bad boys who made good (George Bush and John Kennedy) to the good sons who lost (Al Gore and Ted Roosevelt) to Ted Kennedy (a good son and a disgrace in one singular package), Great Expectations explores two centuries of public drama and family intrigue-a tale that is not over yet.

American political life has been marked by family dynasties, which generally rise, coast and fall, leaving broken ambitions in their wake. So argues journalist and biographer Emery (Washington) in this study of such American political families as the Adamses, the Roosevelts, the Kennedys and the Bushes. While Emery examines the ascents of Theodore Roosevelt and John F. Kennedy, her real focus is on the frustrations and tragedies that, like the embarrassing relatives the families try to shield from public view, have long attached themselves to these dynasties. Emery predictably proposes that the younger generations chafe against unachievable expectations and express their anger in the wayward behavior she describes as a dynastic curse. Thus the dissolute, alcoholic sons of John Adams find modern parallels in the post-1968 Kennedys and the preconversion George W. Bush, all of whom lost their way in their ancestors' long shadows. However, Emery's analysis fails to rise above the simplistic. Emery also revels in the vexations of Al Gore for a full three chapters--two more than she gives to the entire Roosevelt saga. There is much to be said about political dynasties in the United States, but this is hardly the first word, let alone the last. (Dec.) (Publishers Weekly, October 16, 2006)