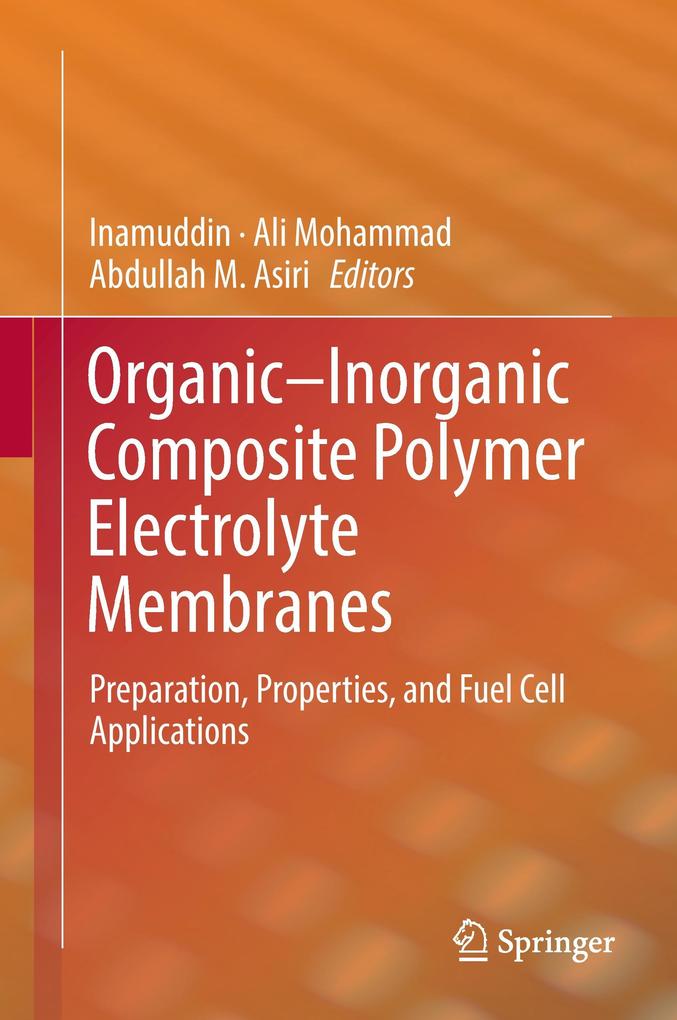 This volume explores the latest developments in the area of polymer electrolyte membranes (PEMs) used for high-temperature fuel cells. Featuring contributions from an international array of researchers, it presents a unified viewpoint on the operating principles of fuel cells, various methodologies used for the fabrication of PEMs, and issues related to the chemical and mechanical stabilities of the membranes. Special attention is given to the fabrication of electrospun nanocomposite membranes.
The editors have consciously placed an emphasis on developments in the area of fast-growing and promising PEM materials obtained via hygroscopic inorganic fillers, solid proton conductors, heterocyclic solvents, ionic liquids, anhydrous H3PO4 blends, and heteropolyacids.
This book is intended for fuel cell researchers and students who are interested in a deeper understanding of the organic-inorganic membranes used in fuel cells, membrane fabrication methodologies, properties and clean energy applications.

Dr. Inamuddin is currently working as Assistant Professor in the Department of Applied Chemistry, Aligarh Muslim University (AMU), Aligarh, India. He obtained Master of Science degree in Organic Chemistry from Chaudhary Charan Singh (CCS) University, Meerut, India, in 2002. He received his Master of Philosophy and Doctor of Philosophy degrees in Applied Chemistry from AMU in 2004 and 2007, respectively. He has extensive research experience in multidisciplinary fields of Analytical Chemistry, Materials Chemistry, and Electrochemistry and, more specifically, Renewable Energy and Environment. He has worked under different research projects as project fellow and senior research fellow funded by University Grants Commission (UGC), Government of India, and Council of Scientific and Industrial Research (CSIR), Government of India. He has received Fast Track Young Scientist Award from the Department of Science and Technology, India, to work in the area of bending actuators and artificial muscles. He is running one major research projects funded by Council of Science and Technology, Lucknow (Uttar Pradesh), India. He has completed three major research projects sanctioned by University Grant Commission, Department of Science and Technology, and Council of Scientific and Industrial Research, India. He has published 72 research articles in international journals of repute and eight book chapters in knowledge-based book editions published by renowned international publishers. He has published five edited books with Springer, United Kingdom, three by Nova Science Publishers, Inc. U.S.A., one by CRC Press Taylor & Francis Asia Pacific and two by Trans Tech Publications Ltd., Switzerland. He is the member of various editorial boards of the journals. He has attended as well as chaired sessions in various international and nation conferences. He has worked as a Postdoctoral Fellow, leading a research team at the Creative Research Initiative Center for Bio-Artificial Muscle, Hanyang University, South Korea, in the field of renewable energy, especially biofuel cells. He has also worked as a Postdoctoral Fellow at the Center of Research Excellence in Renewable Energy, King Fahd University of Petroleum and Minerals, Saudi Arabia, in the field of polymer electrolyte membrane fuel cells and computational fluid dynamics of polymer electrolyte membrane fuel cells. He is a life member of the Journal of the Indian Chemical Society. His research interest includes ion exchange materials, sensor for heavy metal ions, biofuel cells, supercapacitors and bending actuators.
Prof. Ali Mohammad is presently working as UGC-Emeritus Fellow in the Department of Applied Chemistry, Faculty of Engineering and Technology, Aligarh Muslim University, Aligarh, India after serving as chairman of the department of Applied Chemistry for 6 years. His scientific interests include physico-analytical aspects of solid-state reactions, micellar thin layer chromatography, surfactants analysis, and green chromatography. He is the author or coauthor of 250 scientific publications including research articles, reviews, and book chapters. He has supervised 53 students for Ph.D./M.Phil. and M.Tech. degrees. He has also served as Editor of Scientific Journal, "Chemical and Environmental Research" published from India since 1992 to 2012 and as the Associate Editor for Analytical Chemistry section of the Journal of Indian Chemical Society. He has published three edited books with Springer, United Kingdom, He has been the member of editorial boards of Acta Chromatographica, Acta Universitatis Cibiniensis Seria F. Chemia, Air Pollution, and Annals of Agrarian Science. He has attended as well as chaired sessions in various international and nation conferences. He is the life member of several Indian Scientific and Chemical Societies. He has also served as Visiting Professor in King Saud University, Riyadh, Kingdom of Saudi Arabia. Dr. Mohammad obtained his M.Sc. (1972), M.Phil. (1975), Ph.D. (1978), and D.Sc. (1996) degrees from Aligarh Muslim University, Aligarh, India.
Prof. Abdullah M. Asiri is the Head of the Chemistry Department at King Abdulaziz University since October 2009 and he is the founder and the Director of the Center of Excellence for Advanced Materials Research (CEAMR) since 2010 till date. He is the Professor of Organic Photochemistry. He graduated from King Abdulaziz University (KAU) with B.Sc. in Chemistry in 1990 and a Ph.D from University of Wales, College of Cardiff, U.K. in 1995. His research interest covers color chemistry, synthesis of novel photochromic and thermochromic systems, synthesis of novel coloring matters and dyeing of textiles, materials chemistry, nanochemistry and nanotechnology, polymers and plastics. Prof. Asiri is the principal supervisors of more than 20 M.Sc. and six Ph.D theses; He is the main author of ten books of different chemistry disciplines. Prof. Asiri is the Editor-in-Chief of King Abdulaziz University Journal of Science. A major achievement of Prof. Asiri is the discovery of tribochromic compounds, a class of compounds which change from slightly or colorless to deep colored when subjected to small pressure or when grind. This discovery was introduced to the scientific community as a new terminology published by IUPAC in 2000. This discovery was awarded a patent from European Patent office and from UK patent. Prof. Asiri involved in many committees at the KAU level and also on the national level, he took a major role in the advanced materials committee working for KACST to identify the National plan for science and technology in 2007. Prof. Asiri played a major role in advancing the chemistry education and research in KAU, he has been awarded the best Researchers from KAU for the past five years. He also awarded the Young Scientist award from the Saudi Chemical Society in 2009, and also the first prize for the distinction in science from the Saudi Chemical Society in 2012. He also received a recognition certificate from the American Chemical society (Gulf region Chapter) for the advancement of chemical science in the Kingdome. Also he received a Scopus certificate for the most Publishing Scientist in Saudi Arabia in chemistry in 2008. He is also a member of the Editorial Board of various journals of international repute. He is the Vice- President of Saudi Chemical Society (Western Province Branch). He holds four USA patents, more than 800 Publications in international journals, seven book chapters, and ten books.