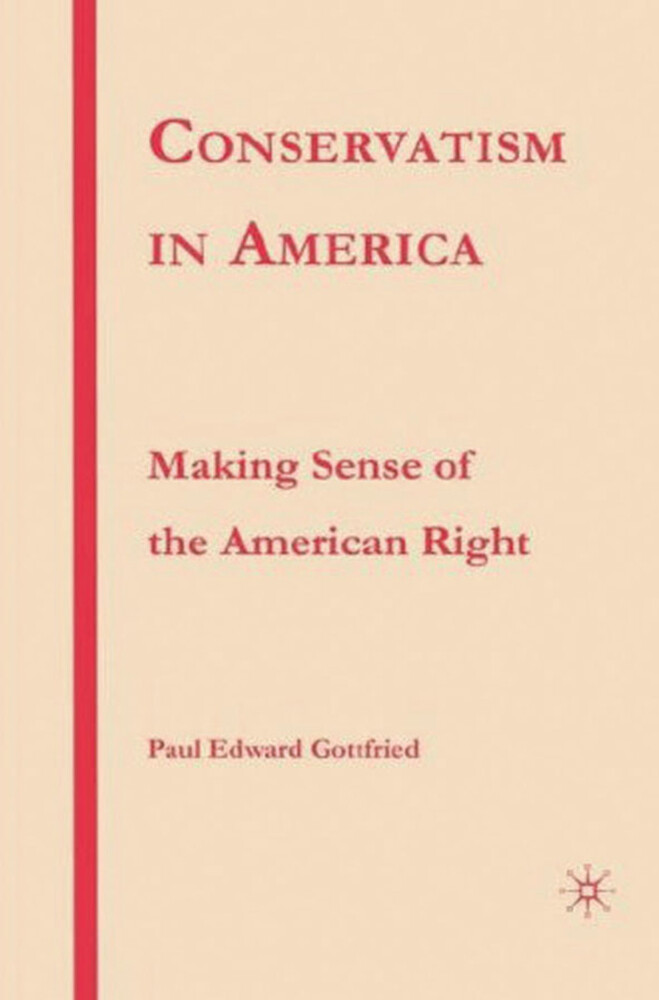 Conservatism in America: Making Sense of the American Right

von P. Gottfried
Making Sense of the American Right. Auflage 2007. Sprache: Englisch.
Buch (gebunden)
This book argues that the American conservative movement, as it now exists, does not have deep roots. It began in the 1950s as the invention of journalists and men of letters reacting to the early Cold War and trying to construct a rallying point for … weiterlesen
Dieser Artikel ist auch verfügbar als:
Geschenk per Mail versenden
Buch (gebunden)

This book argues that the American conservative movement, as it now exists, does not have deep roots. It began in the 1950s as the invention of journalists and men of letters reacting to the early Cold War and trying to construct a rallying point for likeminded opponents of international Communism. The resulting movement has exaggerated the permanence of its values; while its militant anti-Communism, instilled in its followers, and periodic suppression of dissent have weakened its capacity for internal debate. Their movement came to power at least partly by burying an older anti-welfare state Right, one that in fact had enjoyed a social following that was concentrated in a small-town America. The newcomers played down the merits of those they had replaced; and in the 1980's the neoconservatives, who took over the postwar conservative movement from an earlier generation, belittled their predecessors in a similar way. Among the movement's major accomplishments has been to recreate its own past. The success of this revised history lies in the fact that even the movement's critics are now inclined to accept it.

Acknowledgements Introduction The Invention of American Conservatism Conservative Theory in Context On Top of the Heap Wither the Right? The Value Game Revisited Off the Bus Conclusion

PAUL GOTTFRIED is Raffensperger Professor of Humanities at Elizabethtown College in Pennsylvania, USA.

"Paul Gottfried provides something - in fact, a lot - to infuriate everyone. But even when Gottfried is judged wrongheaded, he poses the painful questions that others flee from and offers interpretations that compel close attention from all who wish to understand the prospects for a conservative movement." - Eugene D. Genovese, author of The Southern Tradition: The Achievement and Limitations of an American Conservatism"This study of the development and moral collapse of the postwar American Right is treated with vast historical knowledge that goes beyond Paul Gottfried's stated scope. Although its subject has been examined in a spate of books in recent years, including in two of Gottfried's earlier surveys, this new work brings an informed critical perspective to a major American political movement.A must read for students of American conservatism." - Peter Brimelow, Editor, VDARE.COM "Paul Gottfried comprehends the full complexities and conflicts within American conservatism better than anyone else. This innovative and penetrating book provides the reader with a thorough knowledge and wise understanding of the major thinkers, the charged tensions, and the paradoxical transformations that have made conservatism what it is today. It is a masterful work, and it will help the rest of us to master this challenging, perplexing, and consequential topic." - James Kurth, Claude Smith Professor of Political Science, Swarthmore College "Conservatism in America manifests the author's immense erudition, in German, French, and Italian sources, as well as in English ones. It is an indispensable work for understanding what passes for American conservatism in our day." - The Mises Review
Kunden, die diesen Artikel gekauft haben, kauften auch
Schreiben Sie eine Rezension