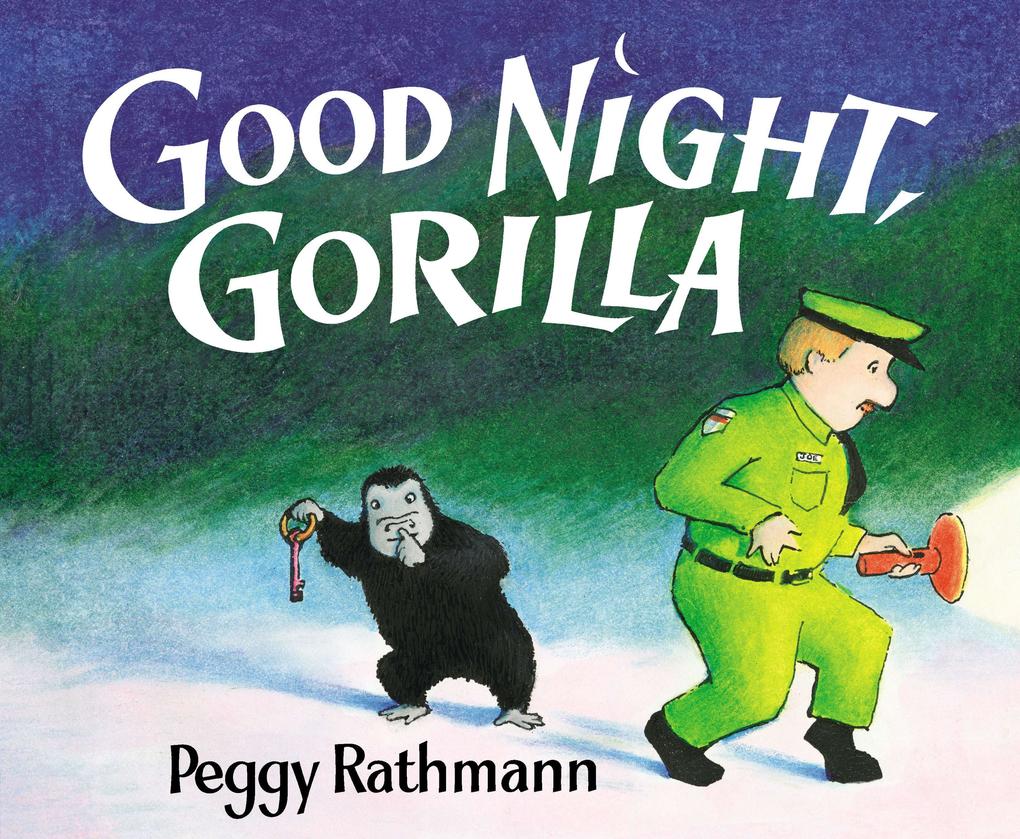 It's bedtime at the zoo, and all the animals are going to sleep. Or are they? Who's that short, furry guy with the keys in his hand and the mischievous grin?

A must have classic for all baby bedtimes.

It's bedtime at the zoo, and all the animals are going to sleep. Or are they? Who's that short, furry guy with the keys in his hand and the mischievous grin?

Sneak along behind the zookeeper's back and see who gets the last laugh in this riotous good-night romp.

The new generous trim size of every toddler's favorite book is even easier to share. With a warm, funny author's note highlighting how much this book has meant to kids and families since it was first published and some clever new details hidden in the illustrations, Good Night, Gorilla is the perfect gift for new babies as well as fans young and old.

Caldecott-medalist Peggy Rathmann was born in St. Paul, Minnesota, and grew up in the suburbs with two brothers and two sisters."In the summer we lolled in plastic wading pools guzzling Kool-Aid. In the winter we sculpted giant snow animals. It was a good life."Ms. Rathmann graduated from Mounds View High School in New Brighton, Minnesota, then attended colleges everywhere, changing her major repeatedly. She eventually earned a B.A. in psychology from the University of Minnesota."I wanted to teach sign language to gorillas, but after taking a class in signing, I realized what I'd rather do was draw pictures of gorillas."Ms. Rathmann studied commercial art at the American Academy in Chicago, fine art at the Atelier Lack in Minneapolis, and children's-book writing and illustration at the Otis Parsons School of Design in Los Angeles."I spent the first three weeks of my writing class at Otis Parsons filching characters from my classmates' stories. Finally, the teacher convinced me that even a beginning writer can create an original character if the character is driven by the writer's most secret weirdness. Eureka! A little girl with a passion for plagiarism! I didn't want anyone to know it was me, so I made the character look like my sister."The resulting book, Ruby the Copycat, earned Ms. Rathmann the "Most Promising New Author" distinction in Publishers Weekly's 1991 annual Cuffie Awards. In 1992 she illustrated Bootsie Barker Bites for Barbara Bottner, her teacher at Otis Parsons.A homework assignment produced an almost wordless story, Good Night, Gorilla, inspired by a childhood memory."When I was little, the highlight of the summer was running barefoot through the grass, in the dark, screaming. We played kick-the-can, and three-times-around-the-house, and sometimes we just stood staring into other people's picture windows, wondering what it would be like to go home to someone else's house."That story, however, was only nineteen pages long, and everyone agreed that the ending was a dud. Two years and ten endings later, Good Night, Gorilla was published and recognized as an ALA Notable Children's Book for 1994.The recipient of the 1996 Caldecott Medal, Officer Buckle and Gloria, is the story of a school safety officer upstaged by his canine partner."We have a videotape of my mother chatting in the dining room while, unnoticed by her or the cameraman, the dog is licking every poached egg on the buffet. The next scene shows the whole family at the breakfast table, complimenting my mother on the delicious poached eggs. The dog, of course, is pretending not to know what a poached egg is. The first time we watched that tape we were so shocked, we couldn't stop laughing. I suspect that videotape had a big influence on my choice of subject matter."Ms. Rathmann lives and works in San Francisco, in an apartment she shares with her husband, John Wick, and a very funny bunch of ants.copyright © 2000 by Penguin Putnam Books for Young Readers. All rights reserved.