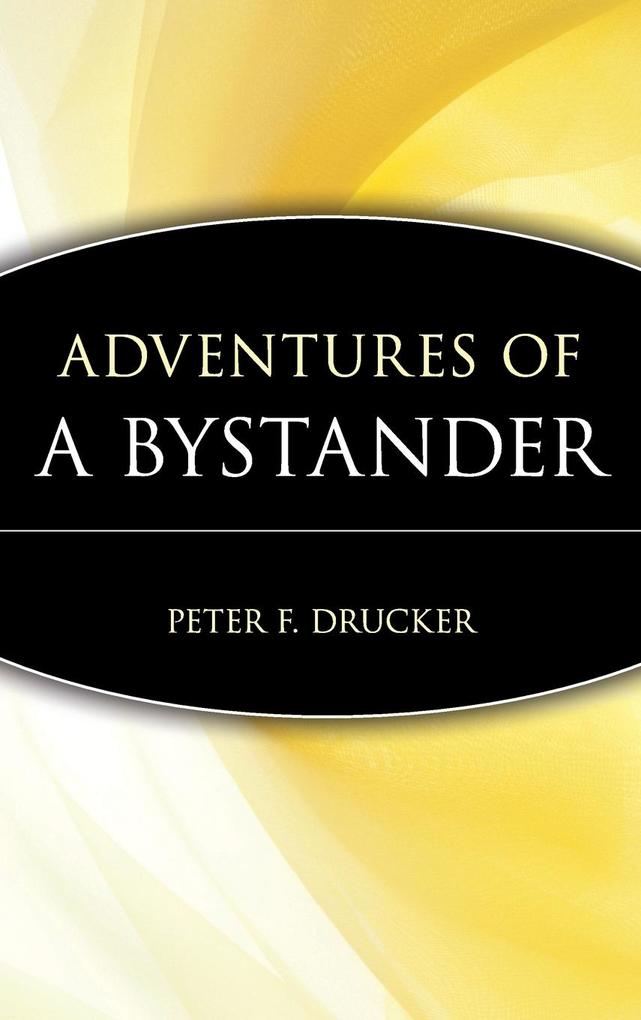 Adventures of a Bystander

10% Rabatt sichern mit Gutscheincode: SPAREN10
​
The classic autobiography of one of the greatest thinkers in our time. This new edition of Drucker's autobiographical collection of stories and vignettes, re-introduces this classic to a wider audience of readers. As Drucker recounts his relationship … weiterlesen
Geschenk per Mail versenden
Buch (gebunden)

"It is [a] belief in diversity and pluralism and the uniqueness of each person that underlies all my writings . . . " -from the Preface.

Regarded as the most influential and widely read thinker on modern organizations and their management, Peter Drucker has also established himself as an unorthodox and independent analyst of politics, the economy, and society. A man of impressive scope and expertise, he has paved significant inroads in a number of key areas, sharing his knowledge and keen insight on everything from the plight of the employee and the effects of technology to the vicissitudes of the markets and the future of the new world order. Adventures of a Bystander is Drucker's rich collection of autobiographical stories and vignettes, in which this legendary figure paints a portrait of his remarkable life, and of the larger historical realities of his time.

In a style that is both unique and engaging, Drucker conveys his life story -from his early teen years in Vienna through the interwar years in Europe, the New Deal era, World War II, and the postwar period in America-through intimate profiles of a host of fascinating people he's known through the years. Their personal histories are, as Drucker tells us, the beads for which his own life serves as the string. A colorful group, these diverse, often unpredictable, always multidimensional individuals were chosen "because each of them, in his or her own highly personal way, reflects and refracts the thirty crucial years from the end of World War I to the first post-World War II decade-the thirty years that largely formed the world in which we now live."

An amazing pageant of characters, both famous and otherwise, springs from these pages, illuminating and defining one of the most tumultuous periods in world history. Along with bankers and courtesans, artists, aristocrats, prophets, and empire-builders, we meet members of Drucker's own family and close circle of friends, among them such prominent figures as Sigmund Freud, Henry Luce, Alfred Sloan, John Lewis, and Buckminster Fuller. Playing to perfection their roles as those who "reflect and refract" the customs, beliefs, and attitudes of the times, these singular personalities lend Adventures of a Bystander a striking "you-are-there" feel.

A brief encounter with Freud becomes the catalyst for an absorbing, multidimensional description of the economics, politics, and social psychology of pre-World War II Europe. Drucker introduces us to Fritz Kraemer, a brilliant, monocle-wearing eccentric who became an influential mentor to the young Henry Kissinger. His personal memoir of Henry Luce documents the development of modern journalism, while in "The Indian Summer of Innocence," he rescues and preserves the very heart of the American experience during the last New Deal years before World War II.

Shedding light on a turbulent and important era, Adventures of a Bystander also reflects Peter Drucker himself as a man of imaginative sympathy and enormous interest in people, ideas, and history. These enthralling stories complement and complete the groundbreaking analytical writing for which he is so revered.

"The cast of characters among whom Drucker moves is superbly rich, and the informed glimpse he provides of a vanished social and political universe is an education in itself. Adventures of a Bystander is better than a novel, more lively than an essay, and as thoughtful as both at their best." -The Harvard Business Review.

"Adventures of a Bystander is a virtuoso performance in which Drucker displays a dazzling diversity of personal interests and knowledge, an awesome power of recall, and a crisp, highly readable writing style." -BusinessWeek.

"Adventures of a Bystander appears in a stroke to have restored the art of the memoir and of the essay. It will doubtless be a while before its like comes round again." -The Washington Post.

Prologue: A Bystander Is Born.

Grandmother and the Twentieth Century.

YOUNG MAN IN AN OLD WORLD.

The Man Who Invented Kissinger.

The Monster and the Lamb.

Noel Brailsford-The Last of the Dissenters.

The Bankers and the Courtesan.

THE INDIAN SUMMER OF INNOCENCE.

The Indian Summer of Innocence.

PETER F. DRUCKER is the Clarke Professor of Social Science and Management at the Claremont Graduate School. Widely regarded as America's leading expert on modern organizations and their management, Dr. Drucker has published 28 books which have been translated into more than 20 languages.

"Drucker s autobiography is a joy to read because of the mix of intriguing characters, momentous events and sharp insights we ve come to expect from one of the most original management theorists."-Upside magazine
Kunden, die diesen Artikel gekauft haben, kauften auch