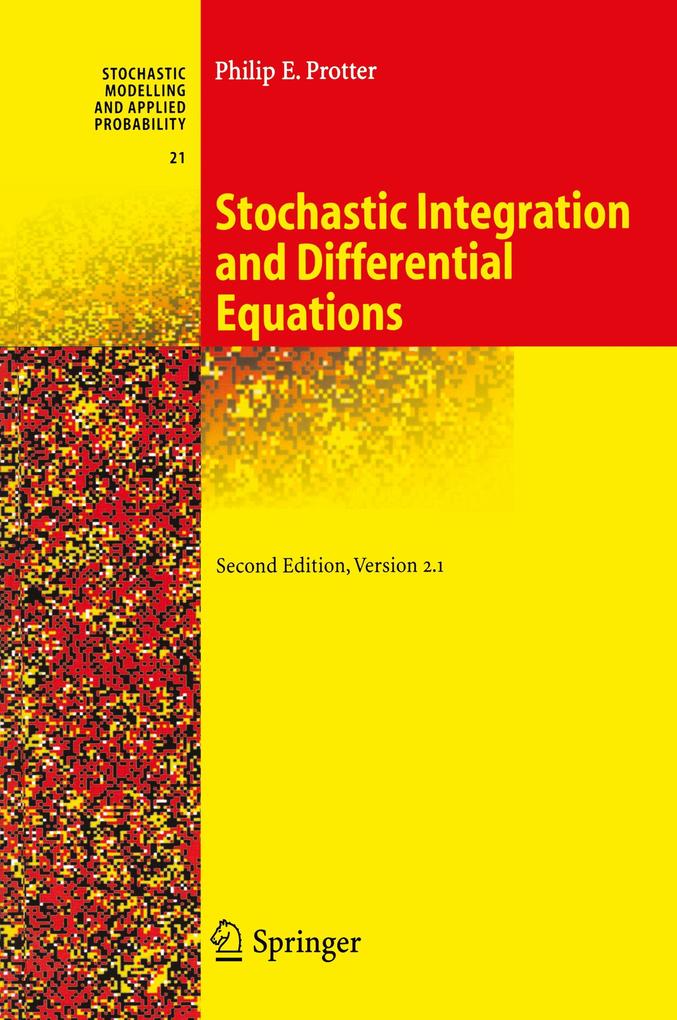 It has been 15 years since the first edition of Stochastic Integration and Differential Equations, A New Approach appeared, and in those years many other texts on the same subject have been published, often with connections to applications, especially mathematical finance. Yet in spite of the apparent simplicity of approach, none of these books has used the functional analytic method of presenting semimartingales and stochastic integration. Thus a 2nd edition seems worthwhile and timely, though it is no longer appropriate to call it "a new approach".


The new edition has several significant changes, most prominently the addition of exercises for solution. These are intended to supplement the text, but lemmas needed in a proof are never relegated to the exercises. Many of the exercises have been tested by graduate students at Purdue and Cornell Universities. Chapter 3 has been completely redone, with a new, more intuitive and simultaneously elementary proof of the fundamental Doob-Meyer decomposition theorem, the more general version of the Girsanov theorem due to Lenglart, the Kazamaki-Novikov criteria for exponential local martingales to be martingales, and a modern treatment of compensators. Chapter 4 treats sigma martingales (important in finance theory) and gives a more comprehensive treatment of martingale representation, including both the Jacod-Yor theory and Emery's examples of martingales that actually have martingale representation (thus going beyond the standard cases of Brownian motion and the compensated Poisson process). New topics added include an introduction to the theory of the expansion of filtrations, a treatment of the Fefferman martingale inequality, and that the dual space of the martingale space H^1 can be identified with BMO martingales. Solutions to selected exercises are available at the web site of the author, with current URL http://www.orie.cornell.edu/~protter/books.html.

From the reviews of the second edition:
"A fast and nice introduction to semimartingales and stochastic integration ... . The second edition of the book has a number of changes and new topics ... . The book is highly recommendable for graduate students and experts alike. It is a pleasure to read, with many examples, and all arguments are presented clearly and with care. This book can equally well serve as a course on stochastic calculus as well as an excellent reference material." (Prof. Dr. M. Vanmaele, KWANT METHODEN, 2004)
"It has been well over a decade ... . the second edition, particularly since the book itself has by now become a well-known and often-used classic. ... While the second edition follows the outline and content of the first edition quite closely ... . The book is carefully written and well presented and covers the topics of stochastic integration ... . The changes and additions have served to make this now classic "new approach" only a more attractive and comprehensive entry point ... ." (Anja Sturm, SIAM Review Vol. 47(1), 2005)
"As anyone who has taught or attended a course on Stochastic calculus knows, one of the most difficult aspect of the theme is absence of exercises in the books on the topic. The second edition of this book comes to the rescue. Each chapter has exercises which should help instructors and students alike. ... This book would serve as a good text for a course on stochastic calculus. At the same time, it is also a good reference book." (Rajeeva L. Karandikar, Sankhya: The Indian Journal of Statistics, Vol. 66 (1), 2004)
"In this new edition several changes have been made; most of them are inclusions of results obtained since the appearance of the first edition ... . addition is exercises, to be found at the end of each chapter. Altogether I agree with the previous reviewer ... the book provides an excellent basis for lecturing or self teaching." (Evelyn Buckwar, Mathematical Reviews, Issue 2005 k)