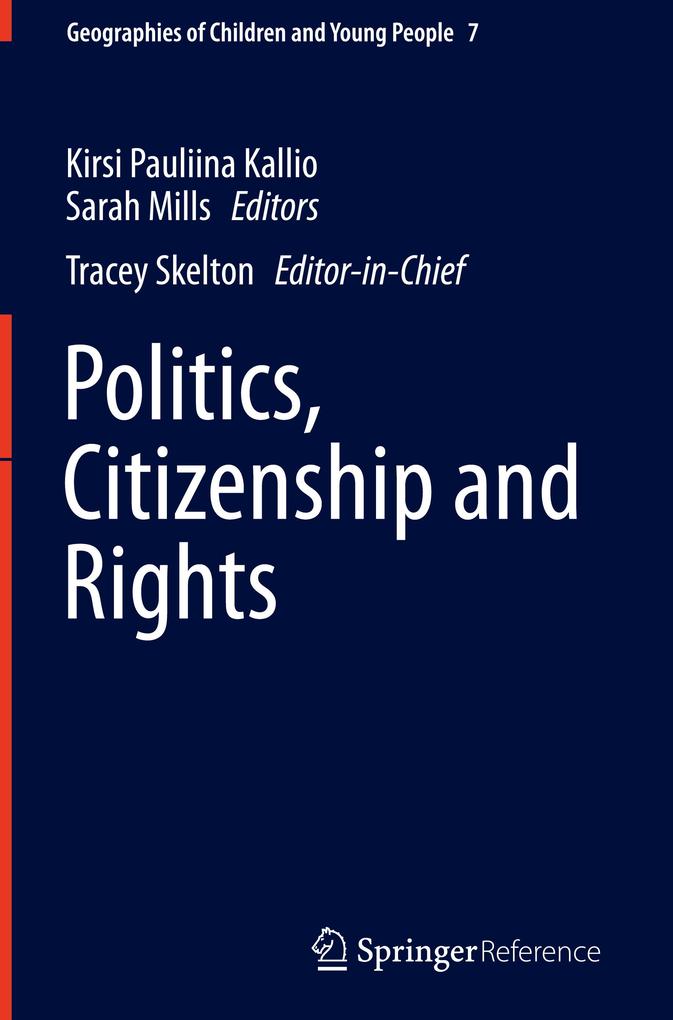 Geographies of Politics, Participation, Resistance, and Rights. 'Politics, Citizenship and Rights'. 1st ed.…
Buch (gebunden)
This book is part of a major reference work on children s and young people s geographies which is structured by themes, reflecting the broader geographical locations of the research. Covers Geographies of Politics, Participation, Resistance, and Righ … weiterlesen
Geschenk per Mail versenden
Buch (gebunden)

This volume explores the political geographies of children and young people and aims to cement this research area within human geography and beyond. Indeed, the policies that specifically target young individuals and groups, and the politics in the everyday lives of children and youth across all scalar dimensions deserve broad attention. The book is structured in four sections with specific focus on the spatialities of the rights of the child, children and young people's agency in politics, youthful practice as political resistance, and active youth citizenship. In the 28 chapters, a total of 43 authors based in 14 different countries explicate how issues of youthful citizenship, children's rights, and children and young people's political agencies cross disciplinary, methodological and theoretical boundaries, with notable geographical variation. Particular attention falls on children and young people's active roles in different kinds of political situations, environments, processes, and practices. The volume also emphasises that there is scope for future research, not least because of the shifting (geo)political landscapes across the globe.

1. Defining Children's Rights to Work and Care in Sub-Saharan Africa: Tensions and Challenges in Policy and Practice.- 2. Privatized Rights, Segregated Childhoods: A Critical Analysis of Neoliberal Education Policy in India.- 3. Creating Spaces to Care: Children's Rights and Food Practices in Residential Care.- 4. Making Space for Listening to Children in Ireland: State Obligations, Children's Voices, and Meaningful Opportunities in Education.- 5. Paradoxical Moments in Children's Contemporary Lives: Childhoods in East Asia.- 6. Youthful Political Presence: Right, Reality and Practice of the Child.- 7. Children and Young People's Political Participation: A Critical Analysis.- 8. Brain-Targeted Teaching and the Biopolitical Child.- 9. Youth as Geopolitical Subjects: The Case of Mostar, Bosnia and Herzegovina.- 10. "Down the Toilet": Spatial Politics and Young Children's Participation.- 11. Children's Embodied Politics of Exclusion and Belonging in Public Space.- 12. Counter-Mapping for Social Justice.- 13. Beyond Crisis Narratives: Changing Modes and Repertoires of Political Participation Among Young People.- 14. Existence as Resistance: Children and Politics of Play in Palestine.- 15. The Art of Not Been Governed: Street Children and Youth in Siem Reap, Cambodia.- 16. Female Political Morality in Palestine: Children's Perspectives.- 17. Young People and the Cultural Politics of Paradise.- 18. Impact of Social Media on Chilean Student Movement.- 19. Between Exclusion and Political Engagement: Conceptualizing Young People's Everyday Politics in the Postwar Setting of Sri Lanka.- 20. Dissent and Youth Citizenship.- 21. A Genealogy of the "Everyday" Within Young People's Citizenship Studies.- 22. Negotiating Active Citizenship: Young People's Participation in Everyday Spaces.- 23. Young People and Citizenship in Rural Estonia: An Everyday Perspective.- 24. Theatre and Citizenship: Young People's Participatory Spaces.- 25. Contending with Multicultural Citizenship in a Divided Society: Perspectives from Young People in Tallinn, Estonia.- 26. Learning Citizenship: Civility, Civil Society, and the Possibilities of Citizenship.- 27. NGOs and the Making of Youth Citizenship in Lebanon.- 28. Representing, Reproducing, and Reconfiguring the Nation: Geographies of Youth Citizenship and Devolution.- Index.

Dr. Kirsi Pauliina Kallio is Research Fellow with the Academy of Finland, based at the University of Tampere Space and Political Agency Research Group (SPARG) that is part of the Centre of Excellence in Research on the Relational and Territorial Politics of Bordering, Identities and Transnationalization (RELATE). Major themes in her work are political subjectivity and agency, subject formation and spatial socialization, transnational children's rights, children's and young people's political geographies, and lived citizenship. In her research, she seeks to develop theories of the subject, relational spatiality, and experiential politics, to create better understanding about human agency as contextually political. She has also worked extensively on the political significance of youthful agency. Dr. Kallio has published extensively in international human geography and childhood studies, including journal articles such as Subject, Action and Polis: Theorizing Political Agency (Progress in Human Geography), The Global as a Field: Children's Rights Advocacy as a Transnational Practice (Environment and Planning D: Society and Space), Lived Citizenship as the Locus of Political Agency in Participatory Policy (Citizenship Studies), and Tracing Children's Politics (Political Geography); edited collections Critical Political Geography (ACME), The Beginning of Politics (Routledge), Children and Young People's Politics in Everyday Life (Space and Polity), and Transnational Lived Citizenship (Global Networks); as well as book chapters like Children's Political Geographies (Companion to Political Geography), Intergenerational Recognition as Political Practice (Intergenerational Space), and Becoming Geopolitical in the Everyday World (Children, Young People and Critical Geopolitics). In her current research project "Political Presence as a Right of the Child," she studies children's and young people's political realities in an international comparative setting.
Dr. Sarah Mills is a Senior Lecturer in Human Geography based at the Department of Geography, Loughborough University, UK. Her central research interests revolve around the geographies of youth citizenship and informal education. She has explored the gendered citizenship projects and educational philosophies of several British youth movements across the twentieth century, including the Scout Movement, Girl Guides, Woodcraft Folk, and Jewish Lads' Brigade. This research has been funded by the Economic and Social Research Council (ESRC), Arts and Humanities Research Council (AHRC), Royal Geographical Society (with Institute of British Geographers), and Institute of Historical Research. Dr. Mills currently holds a ESRC Future Research Leaders award (2014-2017), which supports the research project A Rite of Passage? National Citizen Service and the Geographies of Youth Citizenship that aims to examine the state's motivations behind, the voluntary sector's engagement with, and young people's experiences of National Citizen Service in England. Dr. Mills' research on youth citizenship has been published in several journal articles, including contributions to Transactions of the Institute of British Geographers, Environment and Planning A and Social and Cultural Geography. In 2014, she published the coedited volume Informal Education, Childhood and Youth: Geographies, Histories, Practices with Prof. Peter Kraftl (Palgrave Macmillan). Alongside her research and teaching activities, Sarah serves as the Secretary to the Royal Geographical Society's Social and Cultural Geography Research Group (2012-2015) and is a Committee Member of the Geographies of Children, Youth and Families Research Group, having served as Treasurer for 3 years (2011-2014).
Tracey SkeltonNew Roman", serif; font-size: 12pt;"> is Associate Professor of Human Geography in the Department of Geography at the National University of Singapore. She was previously Professor of Critical Geographies at the University of Loughborough in the UK. The essential elements of her research career focus on people who are socially, politically, and intellectually excluded. Her early work focused on the Caribbean and issues of gender and racial inequality, feminist geographies, and methodological analysis. She has contributed to culture and development debates, particularly through her longitudinal research on the island of Montserrat. Recently, A/P Skelton returned to this field of scholarship through research with volunteers and host organizations in Cambodia as part of a major comparative and collaborative project on development partnerships. She was the principal investigator of a major comparative urbanism research project on the livability, sustainability, and diversity of four Asian cities: Busan in South Korea, Hyderabad in India, Kunming in China, and Singapore.
A/P Skelton is a recognized international leader in the subdiscipline of children's and young people's geographies. In particular, her work has served to challenge the invisibility and marginalization of young people from geographic academic research at the same time as it has demonstrated the rich and varied ways in which young people live their lives both spatially and temporally alongside, but differently from, adults. Her research work has been funded by key research institutions such as the Economic and Social Research Council and the Arts and Humanities Research Council of the UK; the Faculty of Arts and Social Science Academic Research Fund and the Global Asia Institute, both of the National University of Singapore; the Australian Research Council; and the Social Science and Humanities Research Council of Canada.
A/P Skelton was a founding editorial board member of the international journal Children's Geographies and has been the Viewpoints Editor since 2005 and became the Commissioning Editor for Asia in 2010. She is on the editorial boards of the following journals: Geoforum, the Singapore Journal of Tropical Geography, Geography Compass, and ACME: International Journal of Critical Geographies (open access). She has coauthored 2 books, edited 3 collections, guest-edited 2 special journal issues, and published more than 70 journal articles and chapters. She is a passionate teacher and graduate supervisor. She is committed to the politics of research dissemination in accessible formats, in particular to enable the participants in her research projects to understand and recognize their coproduction of knowledge whether through specialized small-scale workshops, translation of reports into local languages, or production of audiovisual materials.