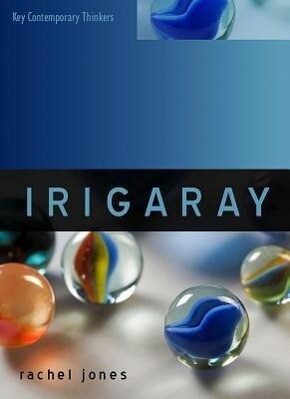 Irigaray: Towards a Sexuate Philosophy

The work of French Philosopher Luce Irigaray has exerted a profound influence on feminist thinking of recent decades and provides a far-reaching challenge to western philosophy′s entrenched patriarchal norms. This book guides the reader through Irigaray′s critical and creative transformation of western thought.

Acknowledgements Abbreviations Introduction: Towards a Sexuate Philosophy 1. Approaching Irigaray: Feminism, Philosophy, Feminist Philosophy 2. Re-visiting Plato's Cave: Orientation and Origins 3. The Way Out of the Cave: A Likely Story... 4. Woman as Other: Variations on an Old Theme 5. Freud, Lacan, and Speaking (as a) Woman 6. The Status of Sexuate Difference 7. An Ethics of Sexuate Difference Conclusion: The Incalculable Being of Being Between Notes Bibliography

Rachel Jones is lecturer in philosophy at the University of Dundee.

"The book is eloquent, well researched, and written by one of the sharpest feminist philosophers and brightest academic thinkers on the UK scene. It should in fact establish itself as a model for introductory philosophical texts. This is absolutely first-rate work -- philosophy at its best." Tina Chanter, DePaul University "Rachel Jones provides an excellent introduction to Irigaray's thought which will benefit feminist philosophers and theorists as well as students. Jones gives a lucid and original account of central themes in Irigaray's work, such as the relation between matter and form, the nature of sexual difference, and the idea of a female subject position." Alison Stone, Lancaster University "This valuable and accessible book meets an urgent need for all those who have wrestled with the intricacies of Luce Irigaray's prose - or who have found the most important of her writings, Speculum of the Other Woman , simply too baffling. Written in an admirably clear style, Rachel Jones's book breaks new ground in showing why and how Irigaray's 'fling with the philosophers' still matters today." Christine Battersby, University of Warwick "This is an astonishing book in its depth and framing of Irigaray. It offers an important contribution to feminist philosophy and has daring, bold, insightful claims that are not seen in other texts." Breanne Fahs, Arizona State University