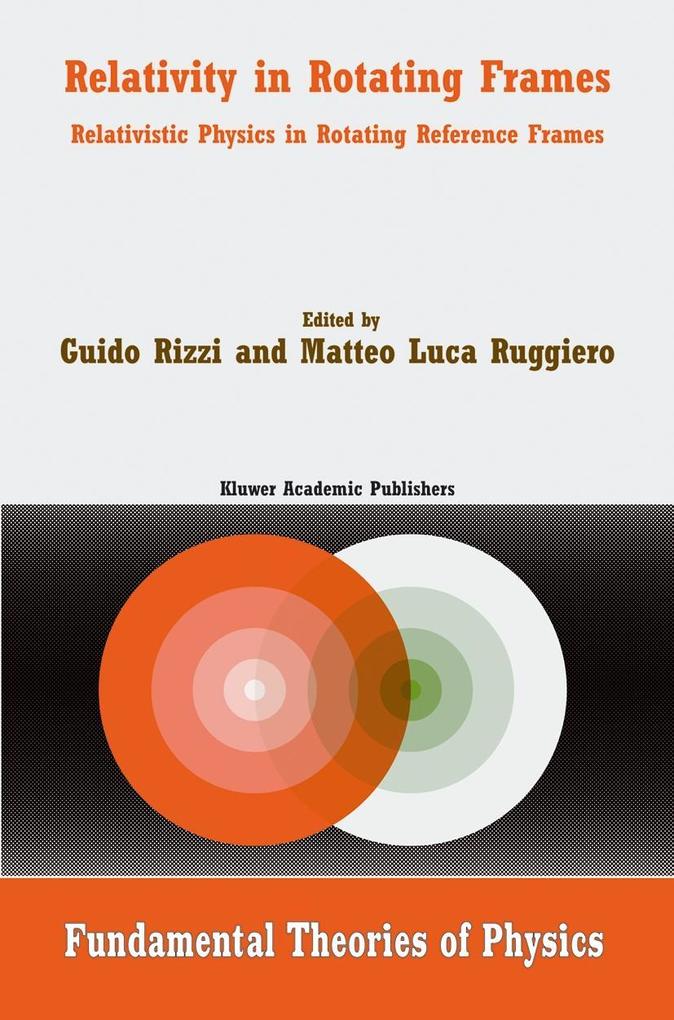 Relativistic Physics in Rotating Reference Frames. Auflage 2004. Sprache: Englisch.
Buch (gebunden)
Even if the subject is a long-standing one, this is the first monograph on this field. On the one hand, this book is intended to give a rather wide review on this field, both in a historical and pedagogical perspective; on the other hand, it aims at … weiterlesen
Geschenk per Mail versenden
Buch (gebunden)

Even if the subject is a long-standing one, this is the first monograph on this field. On the one hand, this book is intended to give a rather wide review on this field, both in a historical and pedagogical perspective; on the other hand, it aims at critically re-examining and discussing the most controversial issues. For instance, according to some authors the celebrated Sagnac effect is a disproval of the theory of relativity applied to rotating frames; according to others, it is an astonishing experimental evidence of the relativistic theory. In order to give the reader a deeper insight into this research field, the contributing authors discuss their opinions on the main subjects in an enthralling virtual round table: in this way, the reader can get a direct comparison of the various viewpoints on the most controversial and interesting topics. This is particularly expedient, since the differences in the various approaches are often based upon subtleties that can be understood only by a direct comparison of the underlying hypotheses.

I Historical Papers.- 1 Uniform Rotation of Rigid Bodies and the Theory of Relativity.- 2 The existence of the luminiferous ether demonstrated by means of the effect of a relative ether wind in an uniformly rotating interferometer.- II Papers.- 1 The Sagnac Effect in the Global Positioning System.- 2 Space, Time and Coordinates in a Rotating World.- 3 The Hypothesis of Locality and its Limitations.- 4 Sagnac effect: end of the mystery.- 5 Synchronization and desynchronization on rotating platforms.- 6 Toward a Consistent Theory of Relativistic Rotation.- 7 Elementary Considerations of the Time and Geometry of Rotating Reference Frames.- 8 Local and Global Anisotropy in the Speed of Light.- 9 Isotropy of the velocity of light and the Sagnac effect.- 10 The relativistic Sagnac effect: two derivations.- 11 Inertial forces: the special relativistic assessment.- 12 Eppur, si muove!.- 13 Does anything happen on a rotating disk?.- 14 Proper co-ordinates of non-inertial observers and rotation.- 15 Space geometry in rotating reference frames: A historical appraisal.- 16 Quantum Physics in Inertial and Gravitational Fields.- 17 Quantum Mechanics in a Rotating Frame.- 18 On rotating spacetimes.- III Round Table.- I Dialogue on the velocity of light in a rotating frame.- II Dialogue on synchronization and Sagnac effect.- III Dialogue on the measurement of lengths in a rotating frame.- IV Dialogue on the Brillet-Hall experiment.- V Dialogue on quantum effects in rotating systems.- VI Dialogue on non uniform motions and other details about Klauber's and Selleri's challenges.

Foundations of Physics, Vol. 34, No. 8, August 2004 (© 2004)
Book Review
Relativity in Rotating Frames. Relativistic Physics in Rotating Reference
Frames. Edited by G.Rizzi and M.L.Ruggiero, (Fundamental Theories of
Physics 135), 452 pp., $193.00. ISBN 1-4020-1805-3.
Soon after Einstein's destruction of absolute simultaneity and Minkowski's formulation of special relativity, the problem of the relativistic description of extended bodies in rotating reference frames led to Ehrenfest's paradox with the subsequent Einstein's answer and to an endless still on going debate about the instantaneous space and the geometry of a rotating disk and the associated Sagnac effect.
As emphasized by Stachel in the Preface of this book, edited by G.Rizzi and M.L.Ruggiero and composed of invited contributions, from both "traditionalists" and "heretics", the existence of a structural difference between translations and rotations goes back to Aristotle. Only with Newton translations with constant velocity where privileged with respect to other types of motion through the introduction of the notion of inertial reference frame and the law of inertia. This notion survived in Einstein's formulation of special relativity, but at the price of loosing the concept of instantaneous three-space: only the notion of being space-like with respect to an observer is well de.ned. Since a relativistic, either inertial or no inertial, observer has no "absolute present", the description of extended objects becomes a non-trivial problem. Given only the postulates of special relativity, namely the constancy and isotropy of the round-trip velocity of light involving only one observer and one clock, there is no unique de.nition of synchronization of clocks, of one-way velocity of light and of spatial distance in an instantaneous three-space. We must make some convention, for instance Einstein's convention of simultaneity in inertial frames implying an isotropic one-way velocity of light and "equal time" hyper-planes, regarding one of these notions to have the other two de.ned.
1281
0015-9018/04/0800-1281/0 © 2004 Plenum Publishing Corporation
1282 Book Review
As a consequence, since in non-inertial frames no convention, globally valid like Einstein's one in inertial frames, is known, different conventions lead to different viewpoints especially in connection with non-inertial uniformly rotating frames and to the necessity of a still lacking interpretation of their equivalence.
This so deeply non-Newtonian framework explains why extended objects like the uniformly rotating disk, which presents no conceptual difficulty at the Newtonian level, give rise to a so controversial and non-unique picture at the relativistic level. Grøn's historical contribution shows how many, often contradictory, viewpoints have been developed in 90 years.
This book is really welcome because it gives a snapshot of the existing spectrum of interpretations regarding rotating coordinate systems (Dieks, Bel, Nikolic, de Felice), the locality hypothesis (Mashhoon), inertial forces (Bini, Jantzen), the anisotropy of the velocity of light in rotating frames and the Sagnac effect (Klauber, Selleri, Sera.ni, Rizzi, Ruggiero, Weber, Sorge, Pascual-Sanchez, Vicente), what is the "space of a rotating disk" and how to de.ne length measurements in rotating frames (Rizzi, Ruggiero,
Tartaglia, Grøn, Klauber, Nikolic), quantum mechanics in rotating frames and the gravitational .eld (Papini, Anandan, Suzuki). Only Mach's principle is absent!
The absence of agreement among the various interpretations, nicely made explicit through six virtual dialogues at the end of the book, is made more acute by the contributions of Rizzi and Sera.ni on the freedom in the choice of the notion of simultaneity in rotating frames and of Ashby on the relevance of the Sagnac effect in the Global Positioning System especially after the developments of modern technology oriented to space navigation and requiring the synchronization of the now existing ultra-precise atomic clocks till the order 1/c3.
In conclusion, it is hoped that this book will be a stimulus to start a fresh search of the missing elements to arrive at a relativistic description of extended objects in arbitrary non-inertial frames. Such a description should include Maxwell equations and should lead to a well-posed Cauchy problem allowing us to get control on the energy balance of every physical system in a non-inertial reference frame.
Luca Lusanna
Firenze, Italy

Buch (gebunden)
The Time Domain in Surface and Structural…