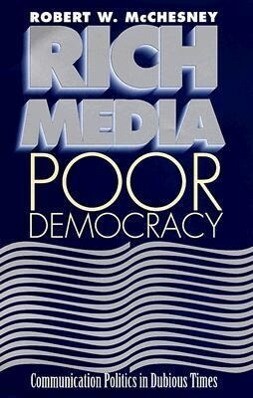 Robert McChesney argues that the media, far from providing a bedrock for freedom and democracy, have become a significant antidemocratic force in the United States and, to varying degrees, worldwide.Rich Media, Poor Democracy addresses the corporate media explosion and the corresponding implosion of public life that characterizes our times. Challenging the assumption that a society drenched in commercial information "choices" is ipso facto a democratic one, McChesney argues that the major beneficiaries of the so-called Information Age are wealthy investors, advertisers, and a handful of enormous media, computer, and telecommunications corporations. This concentrated corporate control, McChesney maintains, is disastrous for any notion of participatory democracy.Combining unprecedented detail on current events with historical sweep, McChesney chronicles the waves of media mergers and acquisitions in the late 1990s. He reviews the corrupt and secretive enactment of public policies surrounding the Internet, digital television, and public broadcasting. He also addresses the gradual and ominous adaptation of the First Amendment ("freedom of the press") as a means of shielding corporate media power and the wealthy.Rich Media, Poor Democracy exposes several myths about the media -- in particular, that the market compels media firms to "give the people what they want" -- that limit the ability of citizens to grasp the real nature and logic of the media system. If we value our democracy, McChesney warns, we must organize politically to restructure the media in order to affirm their connection to democracy.

"McChesney explores what is unquestionably an ongoing assault on the reliability and independence of the media we count on to explain the world to us... He sees journalism as but an inseparable strand in an ever-more-tightly woven cloth of commerce. As such, he says, it is run according to the market-driven imperative of a capitalism: more profit with less risk... McChesney argues persuasively that whatever journalists' personal politics, the media's dominant ideology is pro-market and business class-biased and rests on the assumption that the news business works just fine... It takes a nonjournalist like McChesney to get the big picture." - Russ Baker, Los Angeles Times "[McChesney] takes the beast directly by the throat... [He] has gone to the heart of the matter... The best stuff in McChesney's book is not just how it happened but what the results are in terms of quality." - Molly Ivins, Star Telegram "A meticulously researched, relentlessly argued, wonderfully populist rallying cry for media reform - a welcome departure from the media criticism we have come to know." - Dustin Beilke, Salon Magazine "Tightly researched and extremely readable... An extraordinary resource for those who wish to begin the arduous journey toward remembering what it means to be a citizen in a functioning democracy." - Derrick Jensen, San Francisco Examiner and Chronicle "This is an important book that merited the overwhelming rush of orders received by its publisher upon the mere announcement of its impending appearance. Its central thesis - the incompatibility of boundless capitalism with the diversity of voices required to sustain a democratic society - is a bold challenge to the conventional wisdom that capitalism and democracy are mutually supportive... McChesney's arguments are persuasive and his evidence impressive." - Critical Studies in Media Communication "McChesney ... should be the first winner of the Dionne Warwick Prescience Award for the new millennium as the person best able to telepathically foretell the future on an important topic... He raise the ... dramatic specter of media capture by a few able to control the information upon which our democracy depends. And he wrote all this before AT&T moved in to foreclose Internet access on its lines, before the cable firms took over much of satellite, before Internet AOL and Time Warner combined." - The San Diego Union-Tribune "I highly recommend this book to anyone who is concerned with issues that define our society. It is not a light read, but a thought-provoking book that will stir one to look at issues like election reform, environmental protection, and health care in a new light." - Julie Johnson, Chicago Life "Essential reading for both concerned citizens and activists who want to understand the political economy of the media in the context of global capitalism." - Sheila Nopper, Illinois Times "McChesney joins Upton Sinclair, George Seldes, A.J. Liebling, Ben Bagdikian, and Herb Schiller as an astute critic of the sellout of mass media - and democratic society - to corporate America... Contending that the power and money behind the conglomerate means that everything and everyone has a price, McChesney packs his book with historical and contemporary facts and examples. And (unlike most critics) he offers a solution: four proposals for media reform... All who cherish democratic principles should read this book." - Choice "This refreshingly readable book belongs on supplemental reading lists of courses in media studies, media management and economics, media history, mass communication and society, and political communication." -- Joseph P. Bernt, Journalism and Mass Communication Quarterly