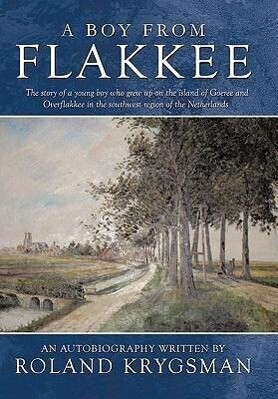 The Story of a Young Boy Who Grew Up on the Island of Goeree and Overflakkee in the Southwest Region of the Netherland.
HC gerader Rücken mit Schutzumschlag.
Sprache: Englisch.

It was on December 15, 1928 when a boy by the name of Roel Krijgsman, also known as Roland Krygsman, was born to Dutch parents on the island of Goeree and Overflakkee in the southwest region of the Netherlands. It was depression time that not only affected the United States, but also in Europe and other parts of the World. Survival was only for the strong. The weak and timid would perish under the world's oppression. It was a time that many would never forget. It was about survival, obtaining food, clothing, shelter, and achieving employment. Watching out for one another became a family affair. Work was scarce, along with food and money. The young and old alike persisted in their efforts to make ends meet. It is through the eyes and collective thoughts of this little boy from Holland that we are introduced to his more than ordinary life near the North Sea. As life goes on, many follow the same road from childhood to adulthood. It is through life changing circumstances that ultimately shape our well-being. What happens in our lives and what we learn will define us in what we become and achieve. The autobiography of Roland's life is indeed extraordinary. The stories of his life, his loves, his adventures, and his quest to succeed in life are imaginable, but yet remind us of our human nature and our ever increasing need to live our lives to the fullest.

Modernization was unheard of. There was no television, or modern appliances like a washer, dryer, and refrigerator. People were poor and many families were quite large. Roland came from a family of seven children. He was the second oldest of six brothers and one sister. As many families found out, each day was a struggle. For the Krygsman family, growing up during the depression period meant that they all needed to work together. Each child was to be treated equally. Each received just enough to survive. There was never abundance; only what each child would get from mother and father. Even grandpa and grandma from both sides of the family assisted in caring for all the children. It was truly a family affair. Mother and father shouldn't have picked their favorites, but they did. Roland would come to find out sooner than later in his young life that he wasn't wanted. How could such loving parents like his deny him of love or to be loved? It is through our childhood that helps shape us into the men and women we become. How we reach that pinnacle is embedded in our minds. As children, we dream of someday becoming someone we can respect, honor, and adore. We all have dreams, but somehow many are robbed of the grand scheme and fall short in life. We have to settle for less and of course, our play on life is distorted. We are locked into life's grip of being less than worthy. We share feelings of inadequacy and failure and wonder aimlessly through life looking for the right answers. Roland was such a boy who developed into a young man looking for life's answers. As a young boy he suffered the loss of a dear brother and was destined to forever try winning over his mother and father's admiration. While going from childhood to adolescence, he faced many challenges and adventures that would have many children today standing in awe. From repairing to rebuilding bicycles, Roland hustled to carve out a piece of his own stake. Attending technical school to become a dental assistant, he persevered to achieve the most in life.

Some of his adventures are shared with the reader. Throughout all what he lived through life was never simple.