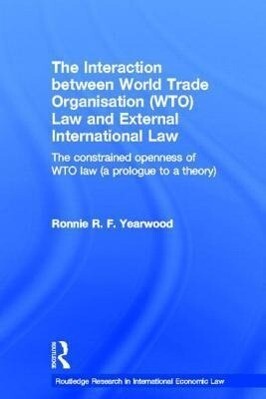 The Constrained Openness of WTO Law (A Prologue to a Theory).
Illustrations.
Sprache: Englisch.

International legal scholarship is concerned with the fragmentation of international law into specialised legal systems such as trade, environment and human rights. Fragmentation raises questions about the inter-systemic interaction between the various specialised systems of international law. This study conceptually focuses on the interaction between World Trade Organisation (WTO) law and external international law. It introduces a legal theory of WTO law, constrained openness, as a way to understand that interaction. The idea is that WTO law, from its own internal point of view, constructs its own law. The effect is that external international law is not incorporated into WTO law wholesale, but is (re)constructed as WTO law. It follows that legal systems do not directly communicate with each other. Therefore, to influence WTO law, an indirect strategic approach is required, which recognises the functional nature of the differentiated systems of the fragmented international legal system.

Ronnie R. F. Yearwood, BSc., LL.M, PhD has worked for the Prime Minister's Office (Barbados) with a special focus on the Caribbean Single Market and Economy. He has lectured in Caribbean politics and sociology in Barbados, and in law at Durham University, Newcastle University, University College London (UCL) and the School of Oriental and African Studies (SOAS), University of London.

'Yearwood makes his points with great intelligence, discernment and flair. A must read for those who are interested in understanding the unique position of WTO law in relation to the remainder of international law.' - Chi Carmody, Faculty of Law, University of Western Ontario