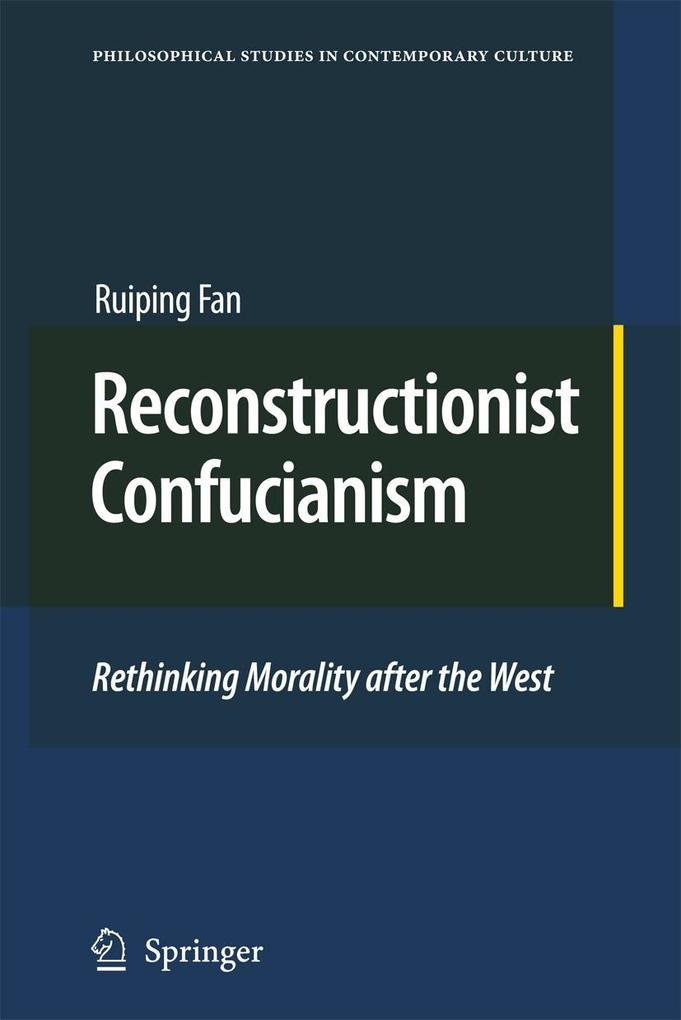 Contrasting with conventional Neo-Confucian attempts to recast the Confucian heritage in light of modern Western values, this book offers a Reconstructionist Confucian project to reclaim Confucian resources to meet contemporary moral and public policy challenges. Ruiping Fan argues that popular accounts of human goods and social justice within the dominant individualist culture of the West are too insubstantial to direct a life of virtue and a proper structure of society. Instead, he demonstrates that the moral insights of Confucian thought are precisely those needed to fill the moral vacuum developing in post-communist China and to address similar problems in the West. The book has a depth of reflection on the Confucian tradition through a comparative philosophical strategy and a breadth of contemporary issues addressed unrivaled by any other work on these topics. It is the first in English to explore not only the endeavor to revive Confucianism in contemporary China, but also brings such an endeavor to bear upon the important ethical, social, and political difficulties being faced in 21st century China. The book should be of interest to any philosopher working in application of traditional Chinese philosophy to contemporary issues as well as any reader interested in comparative cultural and ethical studies.

Acknowledgements Introduction I. Beyond Individualism: Familism as the Key to Virtuous Social Structure Confucian Morality: Why it is in Tension with Contemporary Western Moral Commitments Virtue, Ren and Familial Roles: Deflating Concerns with Individual Rights and Equality A Family-oriented Civil Society: Treating People as Unequals II. Virtue as a Way of Life: Social Justice Reconsidered Virtue and the True Character of Social Obligations: Why Rawlsian Social Justice is Vicious Giving Priority to Virtue over Justice: Reconstructing Chinese Health Care Principles Which Care? Whose Responsibility? And Why Family? Filial Piety and Long-Term Care for the Elderly III. The Market, the Goodness of Profit, and the Proper Character of Chinese Public Policy Towards a Directed Benevolent Market Polity: Looking Beyond Social Democratic Approaches to Health Care How Egalitarianism Corrupted Chinese Medicine: Recovering the Synergy of the Pursuit of Virtue and Profit Honor, Shame, and the Pursuit of Excellence: Towards a Confucian Business Ethics The Human Dominion over Nature: Following the Sages IV. Rites, not Rights: Towards a Richer Vision of the Human Condition Rites as the Foundations of Human Civilization: Rethinking the Role of the Confucian Li How Should We Solve Moral Dissensus? Liberals and Libertarians Have It All Wrong Appeal to Rites and Personhood Restoring the Confucian Personality and Filling the Moral Vacuum in Contemporary China Appendix - Liberalism and Confucianism: A Disputatious Dialogue Index

From the reviews:
"Fan Ruiping's courageous book addresses the question of what should replace communism in China. He defends a Confucian morality that sharply contrasts with liberal individualism and draws implications for concrete issues like morality in business and health-care reform. The book is both provocative and plausible, and it is a must-read for anybody concerned about China's future. And perhaps it will inspire liberals to question their own commitments." (Daniel A. Bell, Tsinghua University)
"This is an important volume in contemporary philosophical thought, deeply and creatively rooted in Confucian scholarship. It is the only major attempt in English to capture Confucian thought that does not distort that thought through background Western philosophical assumptions and commitments. Fan's work will have an enduring impact. In a world in which no one can ignore contemporary Chinese thought, this volume is essential reading." (Nicholas Capaldi, Loyola University New Orleans)
"In recent years, Ruiping Fan has emerged as a strong voice for Confucianism. In this remarkable book on Reconstructionist Confucianism, Fan reclaims and articulates moral resources from the Confucian tradition to meet contemporary moral as well as public policy challenges. Unlike some new-Confucians who either shy away from perceived weaknesses of Confucianism or attempt to dig with a magnifying glass for Confucian values that resonate with modern Western ethics, Fan unapologetically defends a version of Confucian family-oriented favoritism in the face of Western individual-based, universalistic morality, and vigorously argues for a robust Confucian ethic in contemporary society. Fan's position is serious, coherent, and well-grounded. I strongly recommend this book to anyone interested in learning Confucian philosophy in its unwatered-down form." (Chenyang Li, author of The Tao Encounters the West)
"This study in Confucian thought is a ground-breaking and creative work in philosophy that succeeds in bringing the substantive resources of Confucian moral and political thought to bear on the challenges facing contemporary China, indeed the world today. It is an innovative and engaging work in moral and political philosophy of interest not just to those engaged in Confucian or Chinese studies, but to anyone wishing to understand our contemporary cultural context." (David Solomon, Center for Ethics and Culture, University of Notre Dame)