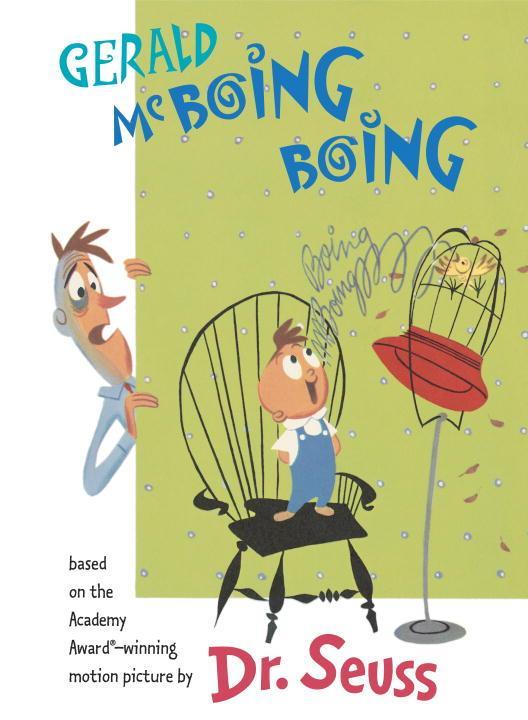 A classic Dr. Seuss story about a boy who's a little different-now available in a larger size!

Based on the 1951 Academy Award-winning animated cartoon written by Dr. Seuss, this sturdy hardcover edition of Gerald McBoing Boing-with vintage graphic-style illustrations by Mel Crawford-is now available in the same size as other large Seuss classics!

Gerald is a small boy who speaks in BIG sounds instead of words. (Think "HONK!" "BOING BOING!" and "CLANG CLANG CLANG!") Unhappy at home and in school, he feels alone in the world until he is discovered by the owner of a radio station in search of sound effects! An ideal choice for celebrating the quirks that make each of us unique, Gerald is a funny and lively read-aloud, perfect for sparking discussion. It's a great gift for birthdays, holidays, and happy occasions of all kinds!

THEODOR SEUSS GEISEL-aka Dr. Seus-is one of the most beloved children's book authors of all time. From The Cat in the Hat to Oh, the Places You'll Go!, his iconic characters, stories, and art style have been a lasting influence on generations of children and adults. The books he wrote and illustrated under the name Dr. Seuss (and others that he wrote but did no illustrate, including some under the pseudonyms Theo. LeSieg and Rosetta Stone) have been translated into thirty languages. Hundreds of millions of copies have found their way into homes and hearts around the world. Dr. Seuss's long list of awards includes Caldecott Honors for McElligot's Pool, If I Ran the Zoo, and Bartholomew and the Oobleck, the Pulitzer Prize, and eight honorary doctorates. Works based on his original stories have won three Oscars, three Emmys, three Grammys, and a Peabody.

MEL CRAWFORD was an artist who drew comics and illustrated books (including many Little Golden Books) featuring the world's most famous cartoon characters, including the Flintstones, Rocky & Bullwinkle, and Howdy Doody.