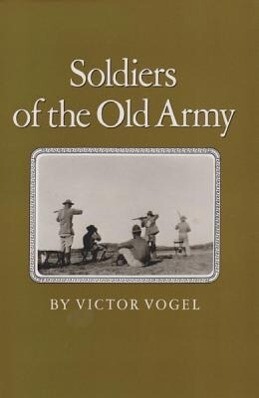 Soldiers of the Old Army

Sprache: Englisch.
Buch (gebunden)
Between the two world wars, the United States Army was "a school, an athletic club, an orphans' home, and a boys' camp." That description of Victor Vogel's "Old Army," in which he enlisted as a private in 1934, gives a small hint at how old-fashioned … weiterlesen
Geschenk per Mail versenden
Buch (gebunden)

Titel: Soldiers of the Old Army

Between the two world wars, the United States Army was "a school, an athletic club, an orphans' home, and a boys' camp." That description of Victor Vogel's "Old Army," in which he enlisted as a private in 1934, gives a small hint at how old-fashioned the army was in an age of isolationism and meager congressional appropriations. In the pre-World War II army, cavalry troops were still mounted, horses pulled artillery carriages, and mules hauled supply wagons. The soldiers' basic weapon was the Springfield rifle, which was virtually an enemy itself as the men learned to fight its vicious recoil. The starting pay for a private was twenty-one dollars, and between 1922 and 1942 that sum did not increase, nor did base pay for men of any rank, and promotions were few and far between. The all-volunteer army served their country as professional soldiers for reasons of patriotism or adventure or even economics, since monthly pay of twenty-one dollars was to some men better than nothing and better than charity. Many men reenlisted time and time again. Whether a private was stationed in Texas or New Jersey for his three-year hitch, he first had basic training, the length of which varied according to how long it took him to master the fundamental skills of the infantryman. If an enlisted man grew tired of the disciplined life in which he had no responsibility except to follow basic orders, he could purchase an honorable discharge. If he could not come up with the cash, he could go AWOL, and after ninety days the army would simply remove him from the rolls with a court-martial in absentia and a dishonorable discharge. In simple, straightforward chapters Vogel describes the various aspects of routine duty he experienced as an enlisted man of Company A, 9th Infantry Regiment. Stationed in Texas, where the largest number of Old Army troops were concentrated, Vogel went on training exercises as well as hunting trips in the Hill Country surrounding Fort Sam Houston. On these field exercises he encountered the northers, toad stranglers, rattlesnakes, and cactus that were new to a Missouri small-town boy. Vogel's vignette of how he discovered the draft, which overwhelmed the Old Army with its sheer numbers, and fought European battles unlike those his training had anticipated, bring the Old Army and the new army into sharp contrast.

Victor Vogel enlisted as a private in the U.S. Army in 1934 and obtained a commission in 1940, retiring with the rank of lieutenant colonel in 1955. He now lives in Springfield, Missouri.