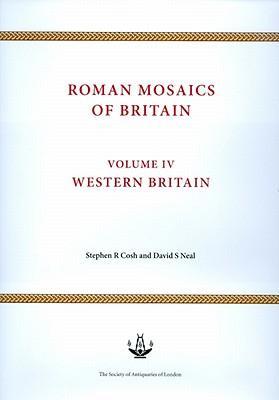 von Stephen R. Cosh, David S. Neal
New. Sprache: Englisch.
Buch (gebunden)
This volume brings to a triumphant conclusion this monumental project to catalogue, describe and illustrate every Romano-British mosaic. The area covered by the fourth and final volume in the corpus is one of the richest regions of Britain in econ … weiterlesen
Geschenk per Mail versenden
Buch (gebunden)

This volume brings to a triumphant conclusion this monumental project to catalogue, describe and illustrate every Romano-British mosaic. The area covered by the fourth and final volume in the corpus is one of the richest regions of Britain in economic as well as architectural and artistic terms and this is reflected in the quantity and quality of the region's mosaics, which include the largest figured mosaic ever found in Britain - the Woodchester Orpheus pavement - which was perhaps the inspiration for the other famous Orpheus mosaics of the Roman Cotswolds. At the heart of this affluent region is Cirencester, Roman Britain's second largest town, represented here by more than sixty mosaics, the second-century examples being the most exquisite in the country. There are also many fine mosaics from the region's highly ornate villas, as well as from the towns of Gloucester, Caerwent and Wroxeter.The catalogue follows the format of earlier volumes in providing an account of each mosaic's discovery and locating the mosaic within its building plan. Following the description are notable parallels and major references. Many of the illustrations are by the authors, with additional ones by Luigi Thompson, as well as photographs and historical engravings, a high proportion of the latter by Samuel Lysons whose home was in Gloucestershire where he did much of his pioneering work in archaeological excavation and illustration. Brief biographies of Lysons and all the other artists whose work grace all four volumes appear at the end of this volume.As with previous volume the work is preceded with a substantial introduction. This deals with the history and topography of the region, buildings and rooms, an assessment of regional workshops, and schemes, ending with a consideration of mosaics in relation to the end of Roman Britain.

David S Neal (b 1940), NDD, DLitt, FSA, MIFA, was first introduced to Roman mosaics and archaeology at Verulamium in 1957 while studying graphic design at Watford School of Art. In 1961 he joined the Ancient Monuments Inspectorate of the then Ministry of Works as an archaeological illustrator and for almost fifteen years supervised the archaeological drawing office. In this period one of his tasks was to record mosaics found on excavations conducted, or sponsored, by the Government. From 1963 he began his own series of excavations on Roman villas in Hertfordshire and in 1975 became a full-time archaeologist with the Department of the Environment (later English Heritage). He is now a freelance consultant. He was made a Fellow of the Society of Antiquaries in 1971 and awarded the degree of Doctor of Letters for his contribution to Romano-British villa studies in 1992. Stephen R Cosh (b 1950), BEd, DLitt, FSA, studied archaeology at Reading University before embarking on a career in teaching. As with David Neal, his interests in art and archaeology led to the study of Romano-British mosaics which he has illustrated since the 1970s, soon adopting Neal's technique. He has written numerous articles on Roman mosaics, particularly the study of regional groups. He was Honorary Secretary of ASPROM (the Association for the Study and Preservation of Roman Mosaics) from 1993 until 2007 and is currently its Editor. In 2002 he was elected a Fellow of the Society of Antiquaries and in 2006 Reading University conferred upon him the degree of Doctor of Letters. The authors formally agreed to collaborate on the corpus in 1993.