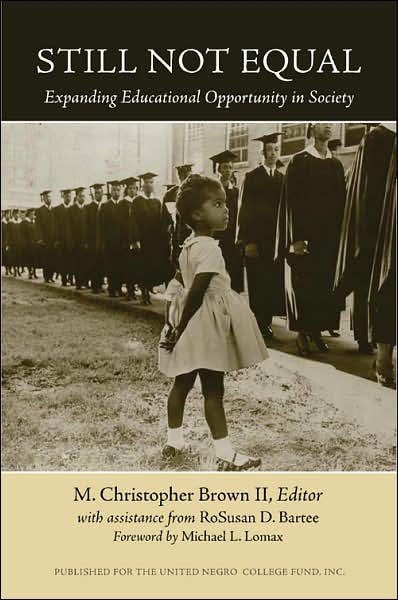 Still Not Equal: Expanding Educational Opportunity in Society addresses the successes and failures of Brown v. Board of Education and the Civil Rights Act of 1964, as well as the continuing challenge of expanding educational opportunity in the United States and across the Black diaspora. The educational, political, and social influence resulting from Brown, the Civil Rights Act, and their progeny have shaped the dynamics of the collective educational and social experiences of people of color. Notwithstanding, the obstacles, barriers, and enablers of educational, occupational, and economic status outcomes impact the formation and interpretation of public policy, specifically, and public perception, generally, about racialized notions of schooling and learning. The pursuit of educational access, attendance, and attainment is intertwined with the implications of academic research and public policy to improve local practices in school settings. Inasmuch as a diverse research agenda, priorities, and activities become situated to critically address status and attainment outcomes in education from preschool through adulthood for African Americans in the United States and abroad, the resulting complexities in education and other settings will continue to behave in ways that cross racial lines.

The Editor: M. Christopher Brown II is Professor and Dean of the College of Education at the University of Nevada, Las Vegas. He previously served as Vice President for Programs and Administration at the American Association of Colleges for Teacher Education, Director of Social Justice and Professional Development for the American Educational Research Association (AERA), as well as Executive Director and Chief Research Scientist of the Frederick D. Patterson Research Institute of the United Negro College Fund. Dr. Brown earned a national reputation for his research and scholarly writing on education policy and administration. He is especially well known for his studies of historically black colleges, educational equity, and institutional culture. Dr. Brown is the author/editor of seven books and more than ninety journal articles, book chapters, monographs, and publications related to education and society. He earned a B.S. in Elementary Education from South Carolina State University, an M.S.Ed. in Educational Policy and Evaluation from the University of Kentucky, and a Ph.D. in Higher Education from The Pennsylvania State University with a cognate in public administration and political science.
Kunden, die diesen Artikel gekauft haben, kauften auch
Schreiben Sie eine Rezension