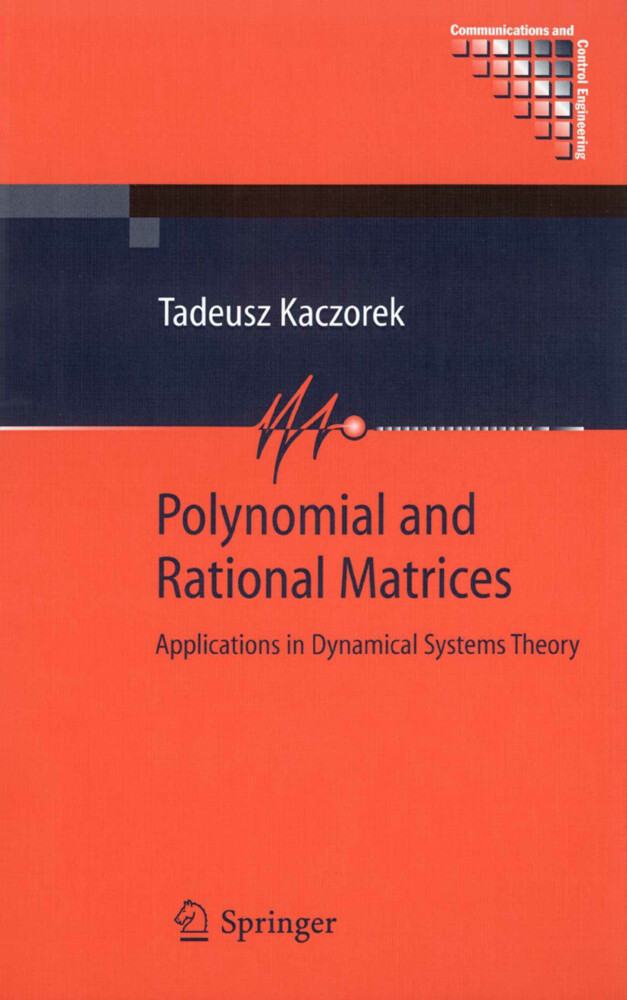 Matrices are effective tools for modelling and analysing dynamical systems. Professor Kaczorek reviews new results in the application of polynomial and rational matrices to continuous- and discrete-time systems. The book begins with important basics such as the Cayley Hamilton theorem and elementary operations of polynomial and rational matrices and moves on to cover such topics as: normal matrices (including their realisation); rational and algebraic polynomial matrix equations; perfect observers for and realisation of linear systems; and new results on positive linear discrete- and continuous-time systems with delays.
The text concludes with an appendix describing definitions and theorems relevant to controllability and observability in linear systems.
"Polynomial and Rational Matrices" will be valuable to researchers in control and/or system theory and will provide useful reference material for graduates studying courses in electronic and computer engineering, mechatronics and electrical engineering.

Tadeusz Kaczorek, received the MSc., PhD and DSc degrees from Electrical Engineering of Warsaw University of Technology in 1956, 1962 and 1964, respectively. Between 1968 and 1969 he was the dean of Electrical Engineering Faculty and from 1970until 1973 he was the prorector of Warsaw University of Technology. He has been a full Professor since 1974. In 1996 he was elected as a full member of Polish Academy of Sciences. From 1988 to 1991 he was the director of the Research Centre of Polish Academy of Sciences in Rome. In June 1999 he was elected as a full member of the Academy of Engineering in Poland. In May 2004 he was elected the honorary member of the Hungarian Academy of Sciences. He holds honorary doctorates from the University of Zielona Góra (2002), the Technical University of Lublin (2004), the Technical University of Szczecin (2004) and Warsaw University of Technology (2004).His research interests cover the theory of systems and the automatic control systems, particularly singular multidimensional systems, positive multidimensional systems and singular positive 1- and 2-dimensional systems. He has researched the field of singular and positive 2-dimensional linear systems. He has published 18 books (5 in English) and over 700 scientific papers (in journals like IEEE Transactions on Automatic Control, IEEE Transactions on Neural Networks, Multidimensional Systems and Signal Processing, International Journal of Control, Bull. Pol. Acad. Sciences, etc.) and proceedings of conferences. He has presented more than 100 invited papers to international conferences and world congresses and has given invited lectures in more than 50 universities in the US, Canada, UK, Germany, Italy, France, Japan, Greece etc. He has been a member of many international committees and programme committees.Professor Kaczorek has supervised over 60 Ph.D. theses. More than 20 of this PhD students have become professors in the US, UK and Japan. He is Editor-in-Chief of Bulletin of the Polish Academy of Sciences, Techn. Sciences and editorial member of about ten international journals.

"It is an excellent book for polynomial and rational matrices and its applications in Dynamical Systems Theory, written by a well-known scientist in the field of control theory. The book can be used either as a reference for researchers in the field of control theory and circuit theory or for teaching for undergraduates or postgraduates in electrical engineering, electronics, mechatronics and computer engineering." (Nicholas Karampetakis, Zentralblatt MATH, Vol. 1114 (16), 2007)

"This book is an extended English version of its original Polish edition based on the author's lectures to Ph.D. students of electrical engineering. ... the book should be useful and accessible to a wide range of researchers and graduate students in applied mathematics, sciences, and engineering because of its thorough and clear presentations of proofs of lemmas and theorems with examples. The application part of the book includes detailed formulation and analysis of problems and step-by-step calculation of solutions to many linear control systems ... ." (Miaohua Jiang, SIAM Review, Vol. 51 (3), 2009)