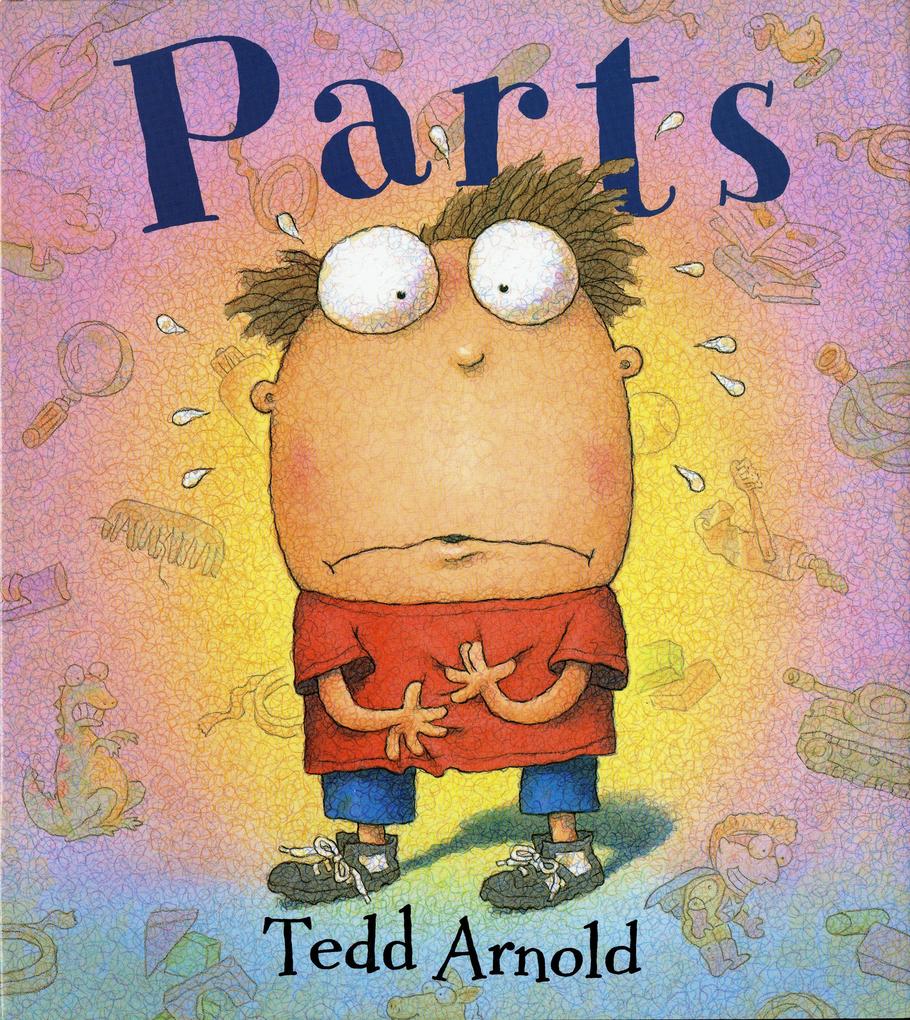 I just don't know what's going onOr why it has to beBut every day it's something worseWhat's happening to me?So begins this uproarious new story from the best-selling creator of No Jumping on the Bed!,Green Wilma, and other popular books. The young narrator has discovered a disturbing trend: There's fuzz in his belly button his toes are peeling and something just fell out of his nose. The last straw is a loose tooth, which convinces him of the awful truth his parts are coming unglued!Parts deals with a subject of deepest interest to every young child: the stuff our bodies shed. Parents will appreciate the reassuring message that it's all quite normal, while Tedd Arnold's comical illustrations and rhyming text are guaranteed to make young readers laugh their heads off.

Born in Elmira, New York, Tedd grew up in a family of six with three brothers. His family lived on a farm in Pennsylvania for several years then returned to Elmira until Tedd was ten years old. His father's work then required that they move to Gainesville, Florida. There, Tedd's first art lessons in an abandoned dentist's office over the Happy Hour pool hall eventually led to a fine arts degree from the University of Florida. He and his wife, Carol, started their family in Tallahassee where Tedd worked as a commercial illustrator. Carol, a Kindergarten teacher, drew Tedd's attention to children's books. Their first son, Walter, inspired his breakthrough picture book, No Jumping on the Bed!. His second son, William, now stars in No More Water in the Tub!, a sequel to his first book. He has now published more than 30 books as author and illustrator. When not working on his books, Tedd's interests include tennis, sketching, reading, coin collecting, and the computer."The inspiration to begin writing and illustrating for children came from my wife, Carol. As a kindergarten teacher, she collected picture books. I was attracted to their colorful pages and the way the words and pictures played with each other, much like the captioned cartoons I had drawn when I was young.
"Perhaps the biggest surprise of my career as an author is that I'm now going back to elementary school! Visiting young readers in classrooms and libraries is something I love. Kids keep me on my toes and they ask a lot of questions. The number one question seems to be, 'Where do you getyour ideas?' It's also the hardest question to answer because every idea is different. Some ideas seem to pop out of thin air -- while I'm in the shower or walking the dog. Others come from reading or research. But most of my ideas come from my family and the things they do and say.
"For instance, one time when my first son, Walter, was five years old, I found him lying on the couch, looking pale as a ghost and clutching a Bible to his chest. He was praying! When I asked what was wrong, he wouldn't answer. In fact, he wouldn't even open his mouth. My wife, Carol, finally coaxed a response from him: he pointed inside his mouth. Carol exclaimed, 'You have a loose tooth!' Walter's eyes nearly popped out with fright. We quickly assured him that it was perfectly okay for his tooth to come loose and that a new one would replace it. But Carol and I looked at each other and realized that despite all our efforts to be good parents, we had somehow completely forgotten to warn Walter that teeth fall out! He had thought he was falling apart! I made a little note in my journal; then ten years later, I expanded that memory into my book Parts."
Tedd Arnold lives in Elmira, New York, with his wife, Carol, two sons, Walter and William, two cats, Cody and Frankie, and one dog, Hershey.