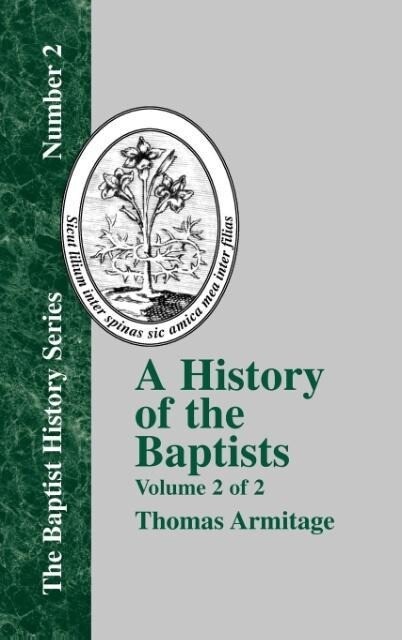 A History of the Baptists - Vol. 2

Titel: A History of the Baptists - Vol. 2
Autor/en: Thomas Armitage

"Thomas Armitage was born in Yorkshire, England, in 1819. He is descended from the old and honored family of the Armitages of that section of Yorkshire, one of whom, Sir John Armitage of Barnsley, was created a baronet by Charles I in 1640. He lost his father at a tender age, and his mother when he was five years old. The last prayer of his mother was that he might be converted and become a good minister of the Saviour.

The religious influence of his godly mother never forsook him. While listening to a sermon on the text, "Is it well with thee?" his sins and danger filled him with grief and alarm, and before he left the sanctuary his heart was filled with the love of Christ. In his sixteenth year he preached his first sermon. His text was, "Come unto me all ye that labor and are heavy laden, and I will give you rest." The truth was blessed to the conversion of three persons. He declined pressing calls to enter the regular ministry of the English Methodist Church, but used his gifts as a local preacher for several years.

He filled many important appointments in the M. E. Church in New York, and when he united with the Baptists he was pastor of the Washington Street church in Albany, one of its most important churches, where the Lord had given him a precious revival and eighty converts.

Dr. Armitage is a scholarly man, full of information, with a powerful intellect; one of the greatest preachers in the United States; regarded by many as the foremost man in the American pulpit. We do not wonder that he is so frequently invited to deliver sermons at ordinations, dedications, installations, missionary anniversaries, and to college students. As a great teacher in Israel, the people love to hear him, and their teachers are delighted with the themes and with the herald.

When very young, he was licensed to preach. At the age of twenty he left his native land and came to the United States. Since then he has not neglected the gift that is in him. The voice that so long ago said to him, on the other side of the sea, "Is it well with thee?" has ever been gladly recognized, and he has "followed Jesus all the way." It led him to Long Island; it led him to Albany; it led him down the Hudson again--and very many whom his words first taught the heavenly lesson now know "It is well" with them. Today few stand higher among the American ministry or more honored of the Great Master, than Tommy, the Yorkshire boy--now Dr. Thomas Armitage of New York." [From: Baptist Encyclopedia, edited by William Cathcart, 1883, Louis H. Everts, Philadelphia"]