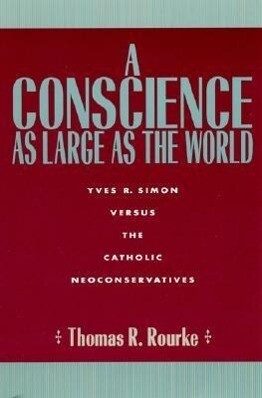 A Conscience as Large as the World

Titel: A Conscience as Large as the World
Autor/en: Thomas R. Rourke

Among the most influential and controversial developments in twentieth-century American social thought has been the rise of the Catholic neoconservatives, particularly Michael Novak, Richard John Neuhaus, and George Weigel. This important book presents a systematic critique of Catholic neoconservatism using the work of Yves Simon as a theoretical and practical lens of analysis. Rourke demonstrates how Simon, whose works represent the Aristotelian-Thomistic roots of Catholic social thought, and the Catholic neoconservatives address many of the same issues, including democratic government, freedom, practical wisdom, wealth, work, culture, and virtue. Rourke argues, however, that the neoconservative approach to these concepts lacks essential elements of the Thomist tradition, fails to overcome the inadequacies of liberalism and therefore is an inadequate expression of Catholic social thought for our time. Invaluable for students and scholars of political science and religion.

... a cogent, tightly argued critique of contemporary Catholic conservatives from a well-articulated Thomistic perspective. This fine book is required reading for anyone interested in understanding historical continuities and discontinuities in Catholic social and political thought. -- Ted G. Jelen, University of Nevada, Las Vegas A fair-minded, respectful, but decisive critique of the Catholic neoconservative movement, as well as an indispensable contribution to Simon scholarship. -- Clarke E. Cochran, Texas Tech University A Conscience as Large as the World does brilliantly one of the most important things a book on politics can do: it clarifies issues of central importance. It does this, moreover, in connection with a vital controversy of our time, that concerning the implications of Christian faith for public life. Everyone, of whatever political or religious persuasion, will find the book provocative and useful. -- Glenn Tinder, University of Massachusetts Rourke probes how the neoconservative abandonment of political authority with respect to the capitalist market undermines their commitment to moral and cultural rejuvenation. Resourceful and original in its critique of profound tensions in the Catholic neoconservative project, this work advances the great dialogue about liberal society and the public good. -- Allen Hertzke, University of Oklahoma A powerful critique from an Aristotelian and Thomist perspective of undiluted free-market economics ... Phronesis ... is certainly a book that should be studied and considered. -- David M. Klocek Perspectives on Political Science Thomas Rourke's study is a valuable and timely analysis of Catholic neoconservatism... the book is well written, thorough, and even-handed. It offers a systematic description and careful evaluation of Catholic neoconservative thought, as well as an excellent introduction to the rich work of Yves R. Simon... It exhibits a welcome attentativeness to both the practical and theoretical dimensions of its subject, thus reminding the reader how much is at stake. The Review Of Politics

Schreiben Sie eine Bewertung für: A Conscience as Large as the World