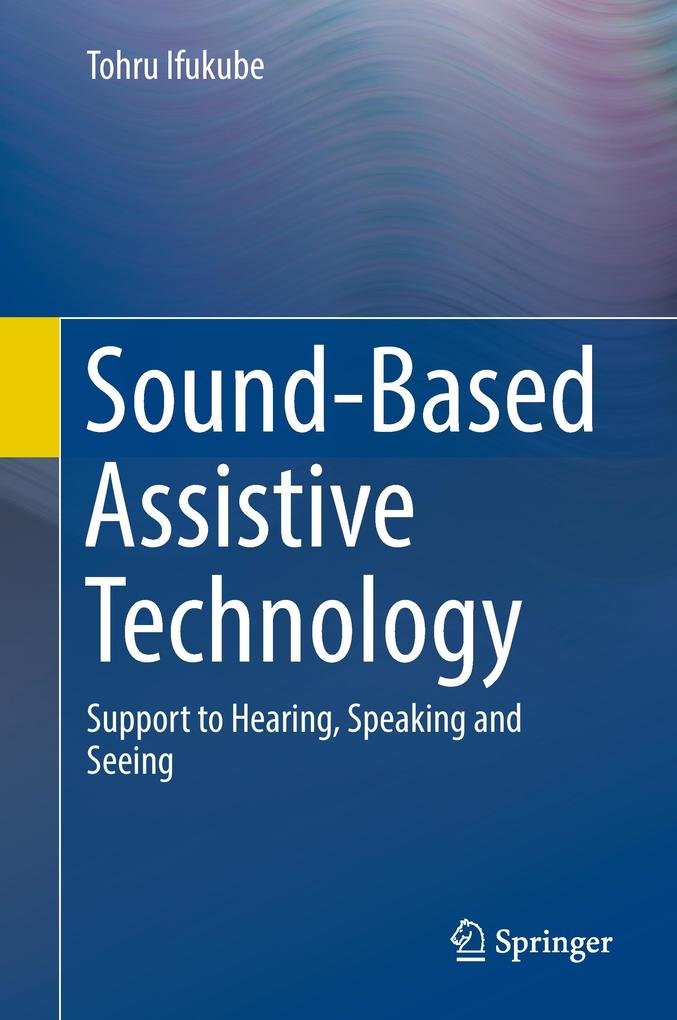 von Tohru Ifukube
Support to Hearing, Speaking and Seeing. Originaltitel: Oto no Fukushi-kougaku. 1st ed. 2017. 195…
Buch (gebunden)
This book presents a technology to help speech-, hearing- and sight-impaired people. It explains how they will benefit from an enhancement in their ability to recognize and produce speech or to detect sounds in their surroundings. Additionally, it is … weiterlesen
Dieser Artikel ist auch verfügbar als:
Geschenk per Mail versenden
Buch (gebunden)

This book presents a technology to help speech-, hearing- and sight-impaired people. It explains how they will benefit from an enhancement in their ability to recognize and produce speech or to detect sounds in their surroundings. Additionally, it is considered how sound-based assistive technology might be applied to the areas of speech recognition, speech synthesis, environmental recognition, virtual reality and robots. The primary focus of this book is to provide an understanding of both the methodology and basic concepts of assistive technology rather than listing the variety of assistive devices developed. This book presents a number of different topics which are sufficiently independent from one another that the reader may begin at any chapter without lacking background information. Much of the research quoted in this book was conducted in the author's laboratories at Hokkaido University and University of Tokyo. This book offers the reader a better understanding of a number of unsolved problems that still persist in the field of sound-based assistive technology.

Tohru Ifukube received the MS and D.Eng degrees in electronics from Hokkaido University in 1971 and 1977, respectively. He joined the laboratory of Medical Electronics, Research Institute of Applied Electricity, Hokkaido University, in 1971.He was also a visiting Associate Professor at Stanford University, CA in 1984.
He was a professor of the Medical Electronics Laboratory and Sensory Information Laboratory at the Research Institute for Electronic Science, Hokkaido University from 1989 to 2002.
He was a professor at the Research Center for Advanced Science and Technology, University of Tokyo until 2010. He is a professor of Hokkaido University of Science and also a research fellow at Institute of Gerontology at the University of Tokyo. He is a professor emeritus of both Hokkaido University and the University of Tokyo. His research interests include the analysis of the human sensory functions and the design of sensory aid devices. Some of these devices have been used for the blind as well as the deaf, and also have been applied to virtual reality and robotic systems.
Fellow: Institute of Electronics, Information, and Communication (2002), Fellow (2011) and President (2012-2013): Virtual Reality Society of Japan, Awards: Established Lifetime Achievement Award of the Robotics Society of Japan (2010), Nakayama Award Grand Prize (for Human Science, 2010), Masters honoring of sound (for Earthquake Early Warning Chime, 2012), Hokkaido News Paper Prize (for Assistive Technology, 2014) .
He is research leader and selection committee of many national project such as a Program Officer "Design of Technology and systems for super-aged society" of JST (Japan Science and Technology Agency), a selection committee chairman of " Information barrier-free project" (Ministry of Internal Affairs and Communications) and a selection committee of "Aids for hearing and seeing" (Ministry of Health, Labour and Welfare).

"This book is recommended for any individual who is interested in learning more about assistive technology and has limited prior knowledge. ... this book provides a short overview of the subject matter and will lead the reader in the right direction to related works." (Richard Burns, Computing Reviews, February, 7, 2018)