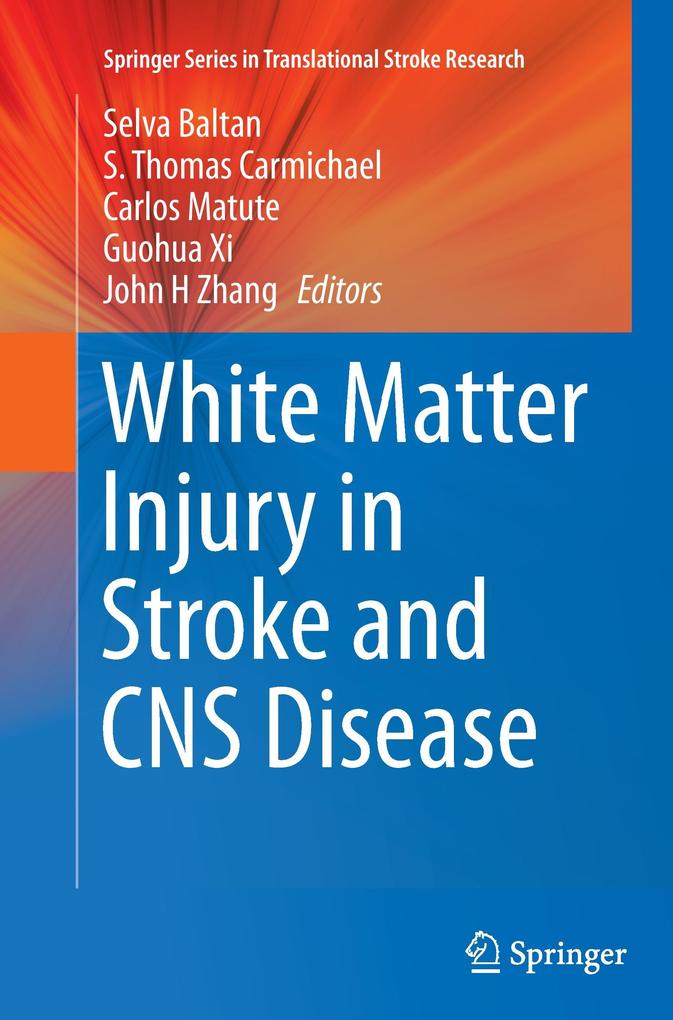 White matter injury can result from both ischemic and hemorrhagic stroke as well as a host of other CNS diseases and conditions such as neonatal injuries, neurodegenerative disorders including Alzheimer's disease, traumatic brain injuries, carbon monoxide poisoning, and drug or alcohol overdoses. The extent of white matter injury is extremely important to patient outcomes. Several recent technological developments including advanced neuroimaging and the breeding of new rodent models of white matter injury have provided growing insight into initial damage and repair after a stroke or other damaging event. The proposed book will be the first to provide a systematic expert summary of normal white matter morphology as well as white matter injury following stroke and other CNS injuries.

Selva Baltan, MD, PhD is an Associate Professor of Molecular Medicine at the Department of Neurosciences at the Cleveland Clinic. Her research focuses on mechanisms of brain cell damage following stroke in white matter in a region-specific and age-specific manner. Currently she is interested in the role of protein acetylation and mitochondrial dynamics in white matter stroke which has expanded her interests to neurodegenerative diseases such as Multiple Sclerosis and Alzheimer's disease that involve white matter.S. Thomas (Tom) Carmichael is a neurologist and neuroscientist in the Department of Neurology at the David Geffen School of Medicine at UCLA. Dr. Carmichael is Professor and Vice Chair in the Department, with active laboratory and clinical interests in stroke and neurorehabilitation and how the brain repairs from injury. He received his M.D. and Ph.D. degrees from Washington University School of Medicine in 1993 and 1994, and completed a Neurology residency at Washington University School of Medicine, serving as Chief Resident in 1997-1998. Dr. Carmichael was a Howard Hughes Medical Institute postdoctoral fellow at UCLA from 1998-2001, studying mechanisms of axonal sprouting, with a clinical emphasis on neurorehabilitation and stroke. He has been on the UCLA faculty since 2001. Dr. Carmichael's laboratory studies the molecular and cellular mechanisms of neural repair after stroke and other forms of brain injury. This research focuses on the processes of axonal sprouting and neural stem cell and progenitor responses after stroke, and on neural stem cell transplantation. Dr. Carmichael is an attending physician on the Neurorehabilitation and Stroke clinical services at UCLA.Dr. Carmichael has published important papers on stroke recovery that have defined mechanisms of plasticity and repair. These findings include the fact that the stroke produces stunned circuits that limit recovery, but can be restored to normal functioning with newly identified experimental drugs. His work has identified a novel brain "growth program" that is activated by stroke and leads to the formation of new connections. These studies have also identified how this growth program changes with age, and how specific molecules in the aged brain block the formation of new connections and of recovery. This and other work has led to new directions in stroke therapeutics, including therapies with stem cell and tissue engineering applications. Dr. Carmichael is in the midst of stroke stem cell development applications with the FDA and with biotechnology companies.Dr. Carlos Matute (1956; Zaragoza, Spain) is Professor of Neuroscience at the University of País Vasco. He graduated in Sciences and got his Ph.D. degree at the University of Zaragoza. Postdoctoral states included the Brain Research Institute (Zurich, Switzerland; 1983-1986), and the Department of Psychobiology at UC Irvine (1987-1990). He has been Visiting Professor at Max-Plank Institute (Göttingen, Germany) and at Einstein College of Medicine (New York, USA).His main research interest is the understanding of the molecular and cellular basis of neurodegeneration and neuroprotection. Recent work carried in Dr. Matute¿s laboratory has served to understand some of the mechanisms involved in neuronal cell death and to find out novel molecules with protective properties such as antioxidants. He has also been interested in the neurobiology of glial cells. He and his colleagues discovered that oligodendrocytes are highly vulnerable to excitotoxic signals mediated by glutamate and ATP receptors which can be activated during tissue damage, inflammation and other pathological conditions including ischemia and multiple sclerosis. His laboratory also worked out some of the mechanisms leading to oligodendrocyte death as a consequence of excitotoxic insults. This includes activation of several types of ionotropic glutamate receptors and loss of glutamate homeostasis as a consequence of inflammation in different experimental paradigms. He also observed that some of the alterations operating in experimental studies occur also in animal models of multiple sclerosis and in post-mortem nervous tissue from patients suffering from this disease. Collectively, this research has generated new knowledge about neuronal and oligodendrocyte death which will serve to develop new therapeutic ideas to treat diseases of the white matter.Carlos Matute has published over 150 papers and book chapters.Guohua Xi, M.D.He received his medical degree from Zhejiang Medical University, China, and had his postdoctoral training at the University of Cincinnati and the University of Michigan. Currently he is Richard C. Schneider Research Professor, Professor of Neurosurgery and Associate Director of Crosby Neurosurgical Laboratories at the University of Michigan. He has published 108 peer-reviewed papers and 75 book chapters and serves as a reviewer on NIH ANIE Study Section. He is also on several editorial boards including Stroke and the Journal of Cerebral Blood Flow and Metabolism. His research is supported by NIH/AHA and his research interests are: 1) The mechanisms of brain injury after hemorrhagic stroke; 2) Iron chelation therapy for intracerebral hemorrhage; and 3) The mechanisms of preconditioning-induced tolerance to brain injury.John H. Zhang MD, PhD, is Professor of Neurosurgery, Anesthesiology, Neurology, and Physiology, Director of Basic Science Research in the Departments of Neurosurgery and Anesthesiology, Vice-Chair for Basic Science Department at the Loma Linda University School of Medicine. He has research interests in Cerebral Vascular Disorders, Animal Model of Neurological Diseases, and Medical Gas Research fields. Dr. Zhang is the Editor-in-Chief of Translational Stroke Research and Medical Gas Research. Dr. Zhang published 11 books on subjects related Stroke and other Neurological Disorders.

"This is an excellent text concerning white matter and the ischemic penumbra of focal cerebral ischemia. This is a very recent review of the literature about inflammatory mediators of injury such as the interleukins, prostaglandins, granulocyte chemotactic factor, and biochemical signal transduction agents. It ties all this information concerning the pathophysiology with autophagocytosis involving membrane proteins, like the chaperones molecules, and lysosomes. I would recommend this book for neurologists, neurosurgeons, students, ischemia researchers, and physiologists." (Joseph J. Grenier, Amazon.com, May, 2014)