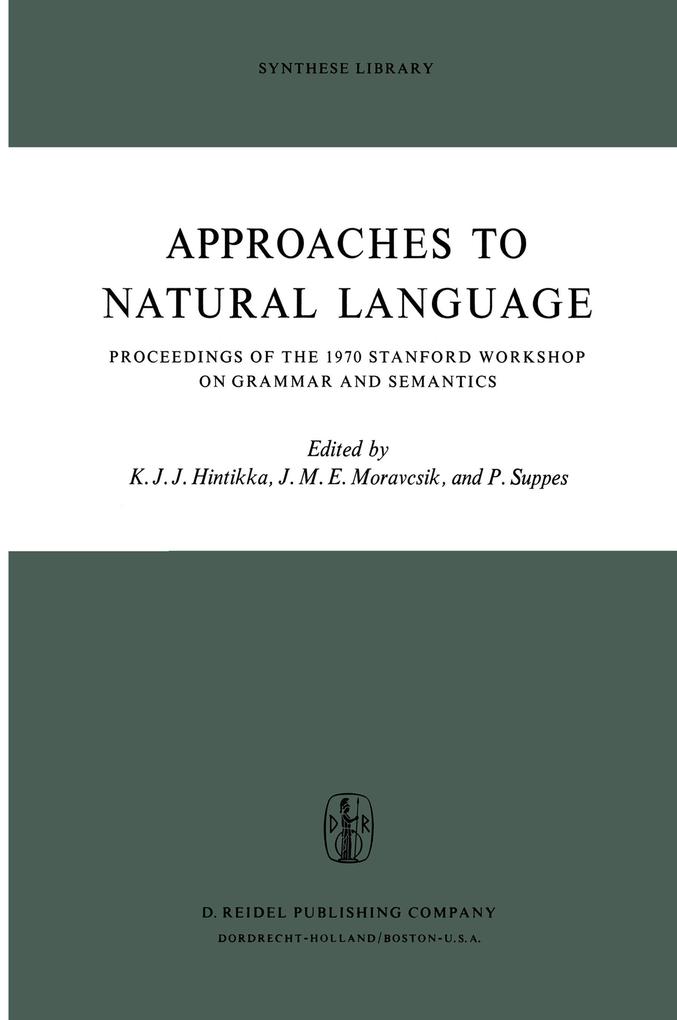 
Proceedings of the 1970 Stanford Workshop on Grammar and Semantics.
Softcover reprint of the original 1st ed. 1973.
Paperback.
Sprache: Englisch.

The papers and comments published in the present volume represent the proceedings of a research workshop on the grammar and semantics of natural languages held at Stanford University in the fall of 1970. The workshop met first for three days in September and then for a period of two days in November for extended discussion and analysis. The workshop was sponsored by the Committee on Basic Research in Education, which has been funded by the United States Office of Education through a grant to the National Academy of Education and the National Academy of Sciences - National Research Council. We acknowledge with pleasure the sponsorship which made possible a series oflively and stimulating meetings that were both enjoyable and instructive for the three of us, and, we hope, for most of the participants, including a number of local linguists and philosophers who did not contribute papers but actively joined in the discussion. One of the central participants in the workshop was Richard Montague. We record our sense of loss at his tragic death early in 1971, and we dedicate this volume to his memory. None of the papers in the present volume discusses explicitly problems of education. In our view such a discussion is neither necessary nor sufficient for a contribution to basic research in education. There are in fact good reasons why the kind of work reported in the present volume constitutes an important aspect of basic research in education.

Jaakko Hintikka is the author or co-author of thirty volumes and of some 300 scholarly articles in mathematical and philosophical logic, epistemology, language theory, philosophy of science, history of ideas and history of philosophy, including Aristotle, Descartes, Leibniz, Kant, Peirce, The Bloomsbury Group, Husserl and Wittgenstein. He has also been active in international scholarly organizations, most recently as the First Vice-President of FISP, Vice-President of IIP and Co-Chair of the American Organizing Committee of the Twentieth World Congress of Philosophy. He has been Editor-in-Chief of the International Journal Synthese and the Managing Editor of Synthese Library since 1965.