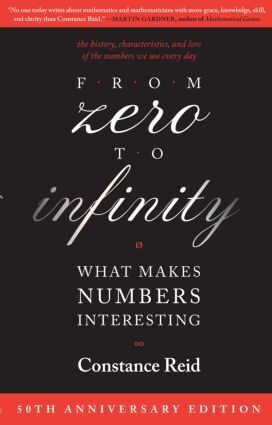 From Zero to Infinity

A combination of number lore, number history, and descriptions of the simply stated, but difficult problems posed by the ordinary numbers that first appeared in 1955.

Although not trained as a mathematician, Constance Reid is well known for her books on mathematicians and mathematics. Following the success of From Zero to Infinity, her first book, Reid went on to write: A Long Way from Euclid; Hilbert; Courant in Gottingen and New York; Neyman; The Search for E.T. Bell; Julia - a Life in Mathematics, among others.

"I (an undergraduate comp sci major) personally enjoyed this book. The author clearly has a love of numbers that can prove infectious. ... the proofs given are all clear and easy to understand."-SIGACT News, 2014 "Upon reading this edition anew, I was struck by its superb mathematical taste. I knew I was meant to spend my life loving numbers and working with them; From Zero to Infinity crucially told me that there was a large community of People of Number I could hope to join when I grew up. ... As I got older, I continued to read From Zero to Infinity and the other influential math books I knew ... I was truly fortunate to have run across From Zero to Infinity when I did."-Bruce Reznick, Notices of the AMS, February 2007 "This book should be in the library of every mathematics teacher, and university faculty who prepare students to teach mathematics should also own this book."-Murray H. Siegel, Mathematics Teaching in the Middle School, February 2007 "... a sequence of rare beauty, a drama built out of nothing but numbers-and imagination."-Freeman Dyson, Institute for Advanced Study, Princeton "... singular for its insight into the imagination, relevance, and sheer excitement of mathematics."-Kirkus Bulletin, November 2005
Kunden, die diesen Artikel gekauft haben, kauften auch
Schreiben Sie eine Rezension