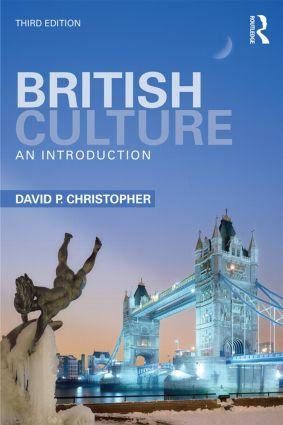 Thisthird edition of British Culture is the complete introduction to culture and thearts in Britain today. Extensively illustrated and incredibly student-friendly, this edition offers a wider range of topics and greater emphasis on business, culture and the growing influence of globalization onoutstanding artists and developments in the field. The new edition features:

fully revised and updated chapters
new chapters on media, cyberculture and festivals
follow-up activities and weblinks.
Thistitle is an engaging study of contemporary life and arts and,together withits companion website, is essential reading for every student of modern Britain.

Formerly Associate Professor at the University of La Rioja, Dr. David Christopher is a researcher and author in Culture, Media and Language, and collaborates with universities and arts organizations worldwide.

"This is an excellent introductory text for students of contemporary British society and culture. The work is engagingly and clearly written, providing readers with not only an accessible summary of relevant topics but also a range of helpful case-studies. Recently updated, this study should continue to serve as the standard work in this field."

" British Culture (3rd edition) provides a "complete introduction to culture and the arts," placed in the context of major developments in the political, social and economic history of England, Scotland, Wales and Northern Ireland-as well as the United Kingdom's changing relations to Europe, North America, the Commonwealth, and the wider world-since 1945. Anyone interested in the increasingly plural and complex character of 21st-century Britain will find it an instructive and engaging study. British Culture is a versatile accomplishment, and can be profitably read from front to back, or, for more targeted research, approached by individual chapters or sections. Its organization makes it readily accessible as both a survey and a reference."

"Unlike many who proffer an introduction to Britain's culture, Christopher focusses on its enviable products. He casts the work of writers and journalists, film and television makers, fashion designers and musicians against a half century of social and political history. A fine book for courses which locate British Literature within a wider context."