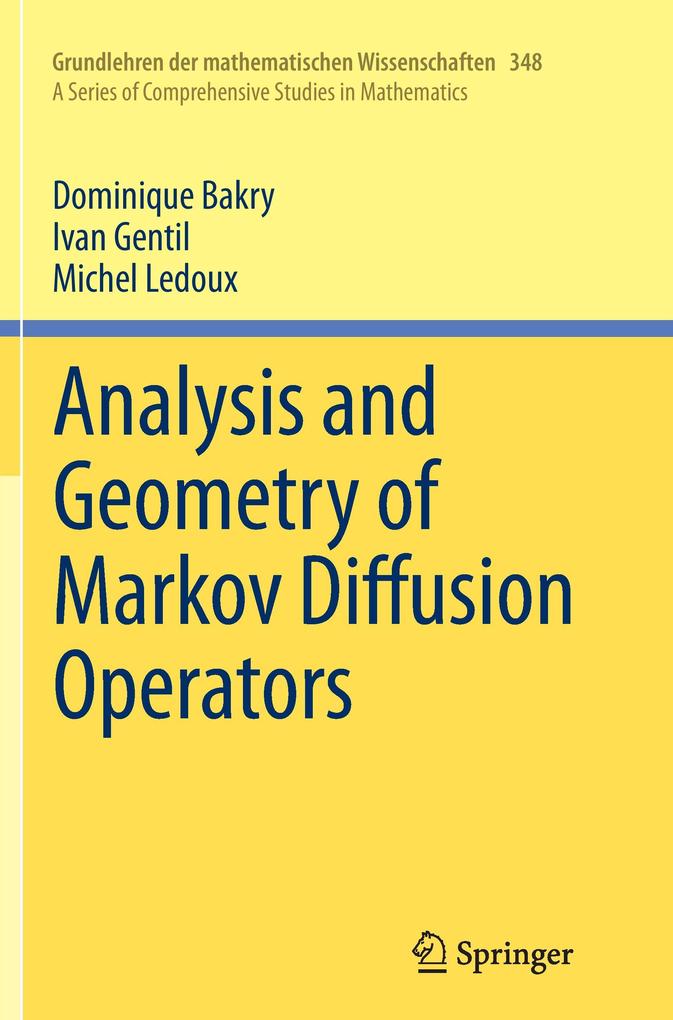 The present volume is an extensive monograph on the analytic and geometric aspects of Markov diffusion operators. It focuses on the geometric curvature properties of the underlying structure in order to study convergence to equilibrium, spectral bounds, functional inequalities such as Poincaré, Sobolev or logarithmic Sobolev inequalities, and various bounds on solutions of evolution equations. At the same time, it covers a large class of evolution and partial differential equations.

The book is intended to serve as an introduction to the subject and to be accessible for beginning and advanced scientists and non-specialists. Simultaneously, it covers a wide range of results and techniques from the early developments in the mid-eighties to the latest achievements. As such, students and researchers interested in the modern aspects of Markov diffusion operators and semigroups and their connections to analytic functional inequalities, probabilistic convergence to equilibrium and geometric curvature will find it especially useful. Selected chapters can also be used for advanced courses on the topic.

"The book is friendly written and is of a rich content. With simple examples, main ideas of the study are clearly explained and naturally extended to a general framework, so that main progress in the field made for the past decades is presented in a smooth way. The monograph is undoubtedly a significant reference for further development of diffusion semigroups and related topics." (Feng-Yu Wang, zbMATH 1376.60002, 2018)

"It is extremely rich. It is more original and inspirational than a treatise. One can use it and benefit from it in many ways: as a reference book, as an inspiration source, by focusing on a property or on an example. ... From the beginning to the end, this book definitely has a strong personality and a characteristic taste. ... anybody who wants to explore analytic, probabilistic or geometric properties of Markov semigroups to have a look at it first." (Thierry Coulhon, Jahresbericht der Deutschen Math-Vereinigung, Vol. 119, 2017)

"This impressive monograph is about an important and highly active area that straddles the fertile land occupied by both probability and analysis. ... It is written with great clarity and style, and was clearly a labour of love for the authors. I am convinced that it will be a valuable resource for researchers in analysis and probability for many years to come." (David Applebaum, The Mathematical Gazette, Vol. 100 (548), July, 2016)