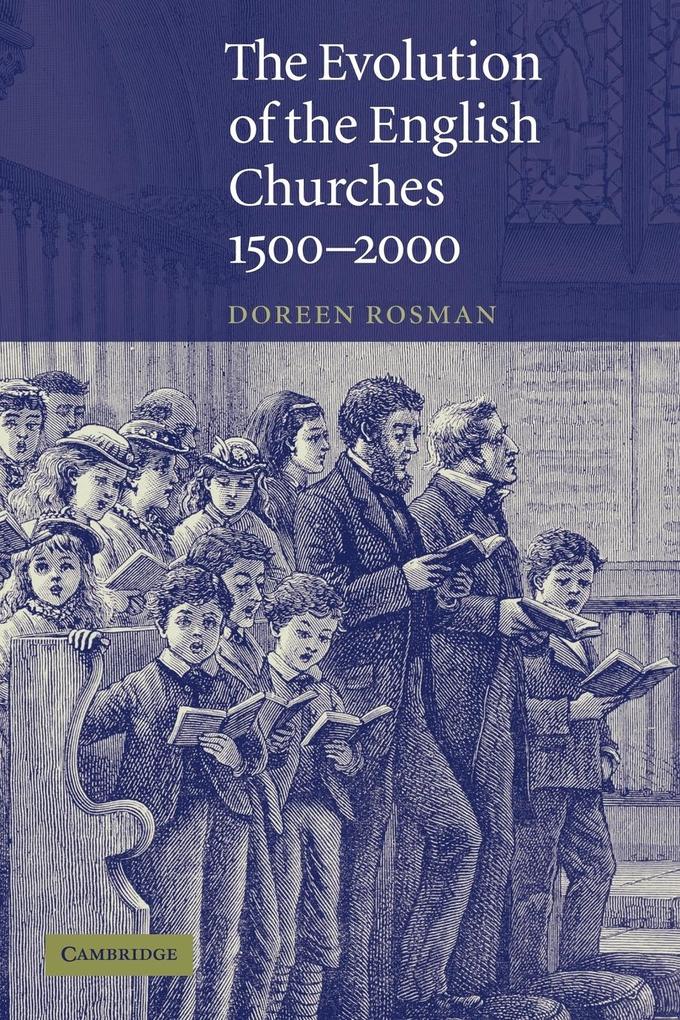 von Doreen Rosman
Paperback. Sprache: Englisch.
Buch (kartoniert)
Unlike general histories that concentrate on church leaders, this study focuses upon the lives of ordinary English church-goers and the local clergy who ministered to them from the Reformation to the present. Doreen Rosman traces changes in church li … weiterlesen
Dieser Artikel ist auch verfügbar als:
Geschenk per Mail versenden
Buch (kartoniert)

Titel: The Evolution of the English Churches, 1500-2000
Autor/en: Doreen Rosman

Unlike general histories that concentrate on church leaders, this study focuses upon the lives of ordinary English church-goers and the local clergy who ministered to them from the Reformation to the present. Doreen Rosman traces changes in church life, charting the emergence of distinctive characteristics among different denominations. She emphasizes recent developments by examining the growth of new independent churches in the late twentieth century.

Preface; 1. Buildings, beliefs and community life; 2. From Catholic to Protestant; 3. Moulding the character of the church; 4. Conflict, coercion, and compromise; 5. Dissenters, Catholics, and Anglicans; 6. The eighteenth-century revival; 7. Diversity, competition, and strife; 8. The vigour of Victorian Christianity; 9. Churches, chapels and Protestant worship; 10. Perceptions of faith c. 1850-2000; 11. Church communities in the modern world; 12. Churches together and churches apart.

DOREEN ROSMAN taught in the School of History at the University of Kent, 1974-2001. Her publications include Evangelicals and Culture (1984, reprinted 1992) and From Catholic to Protestant: Religion and the People in Tudor England (1996).

'... quite simply one of the finest books your reviewer has ever read ... This magnificent book is highly recommended to everyone who enjoys a clear and well-crafted narrative, who is interested in knowing what impact the Churches have had on ordinary people during the last 500 years and who wants a reliable guide to the main (and many subsidiary) strands of religious thought in practice in England during that period.' The Methodist Recorder 'Written clearly and with refreshing objectivity ... this wise and comprehensive book will be a godsend to teachers and students.' The Tablet '... a delightful book to read ... difficult to put down ...'. Open History '... riveting reading ...' Pilgrim Post 'This book is undoubtedly the best general survey of English Christianity since the late Middle Ages so far. It is written in a lively style which seeks to explain, in simple terms for the non-expert reader, developments in English Christianity over the last five hundred years, but it is also a perceptive and judicious distillation of the latest scholarship.' Theology 'Students of church history, and people wanting to learn more about the traditions that have bequeathed the contemporary church scene in England, will find this a very helpful discussion.' Baptist Times 'The chapters on English Christianity in the late twentieth century are among the best in the book. Doreen Rosman picks her way succinctly through such thorny issues as ecumenism and the women priests controversy.' The Catholic Herald 'Even Dr Rosman's objective book leaves one still worried about what may become of the English Churches when the present grey heads are no longer in their pews. But anyone looking for encouragement based on information ought to notice this story about people and prayers, which is more than the ecclesiastical equivalent of history as a story about kings, orators and battles.' The Church Times 'Throughout the book the author is objective and balanced in her presentation of the often complex history of English religion.' Contemporary Review 'It is a broad sweep of the field and must be seen in this light; as such many will find it valuable.' Unitarian Historical Society 'Rosman is a good communicator. Her narrative is fast-paced and packed with interest. This accessible introduction will be of wide appeal, both to students of English church history and to ordinary churchgoers intrigued by the ordinary churchgoing of their ancestors.' Anvil '... on its chosen ground this study is admirable. It supplies a long-needed desideratum, a single-volume history of the English churches that is intelligible to the ordinary student (or worshipper). The scholarship on which it is based is up to date; the judgements are fair-minded and sound; and the clarity of the prose never lapses into obscurity. Historians who are not specialists in religion will find it an invaluable addition to their libraries.' D. W. Bebbington, University of Stirling, History '... a very readable romp through five centuries of English Christianity ...' Sixteenth Century Journal 'There has been a need for some time for a short, well-written, general introduction to English church life since the Reformation, and Doreen Rosman's latest book admirably meets it.' Reviews in Religion and Theology 'This is a fascinating and highly readable account of English church life, which young ministers in particular need to read in order to understand the context in which they find themselves today.' Ministry Today