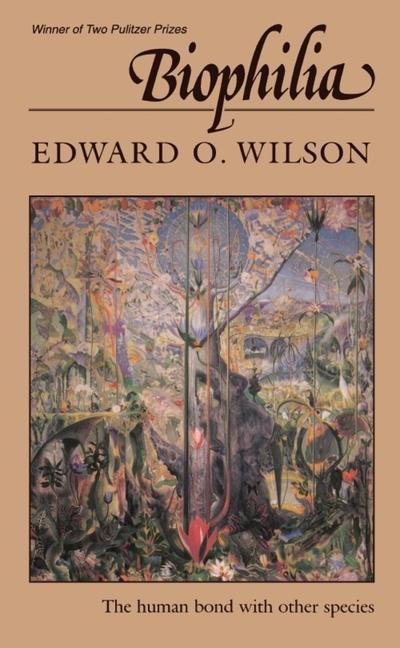 von Edward O. Wilson
none. Sprache: Englisch.
Buch (kartoniert)
The eminent biologist reflects on his own response to nature and the aesthetic aspects of his exploration of natural systems in an intensely personal essay that examines the essential links between mankind and the rest of the living world.
Geschenk per Mail versenden
Buch (kartoniert)

A fine memoir by one of America's foremost evolutionary biologists. E. O. Wilson defines biophilia as 'the innate tendency [in human beings] to focus on life and lifelike process. To an extent still undervalued in philosophy and religion, our existence depends on this propensity, our spirit is woven from it, hopes rise on its currents.' Scientifically demonstrating this human propensity would be a task beyond the scope of today's biology, and Wilson wisely eschews that course. Instead, he relies on his own experiences and feelings as a field biologist, cleverly interweaving them with the facts, history, and philosophy of evolutionary biology and an eclectic set of cultural observations. -- Paul R. Ehrlich Natural History There's more to this unbuttoned and intellectually playful book than its plea for a conservation of ethic and the preservation of animal species in all their diversity. We get, for example, several autobiographical glimpses into the background of Professor Wilson...We see Professor Wilson as a boy growing up in the Florida panhandle...Elsewhere he astonishes us with a description of the mating dance of the male Emperor of Germany bird of paradise, and the degree of genetic congruity between pygmy chimpanzees and Homo Sapiens. -- Christopher Lehmann-Haupt New York Times E. O. Wilson is the entomologist Curator of the Museum of Comparative Zoology at Harvard. His science writing for the general public has won him the Pulitzer Prize and his scientific publications have won him the highest honors American science can bestow. He is well equipped to engage a subject dear to nature-lovers which until now has not been identified as a species trait--biophilia. The freshness of Wilson's approach lies in its freedom from the obsessions of the environmentalist movement...While he shares the conservationist ethic of environmentalists, and seeks to impart its practical imperatives, he eschews cultism...Let this highly readable book then be commended to all biophiliacs and technocrats. -- Hiram Caton Times Literary Supplement The book consists of a set of nine essays. Although they are masterpieces of prose style, they more effectively illustrate Wilson's own biophilia than his contention that biophilia exists as a general human trait...Wilson moves fluidly among minute observations of life forms ranging from leaf-cutter ants to birds of paradise, artfully pausing for a philosophical reflection here and a folksy anecdote there. -- John Wilkes Los Angeles Times A fine memoir by one of America's foremost evolutionary biologists...erudite, elegant, and poetic Natural History Biophilia is an immensely readable book. Wilson is a master storyteller, skillful at evoking exotic scenes. Washington Post Book World Wilson's own empathy with things illuminates these essays with fresh perceptions of everyday matters...They are masterpieces of prose style. Los Angeles Times