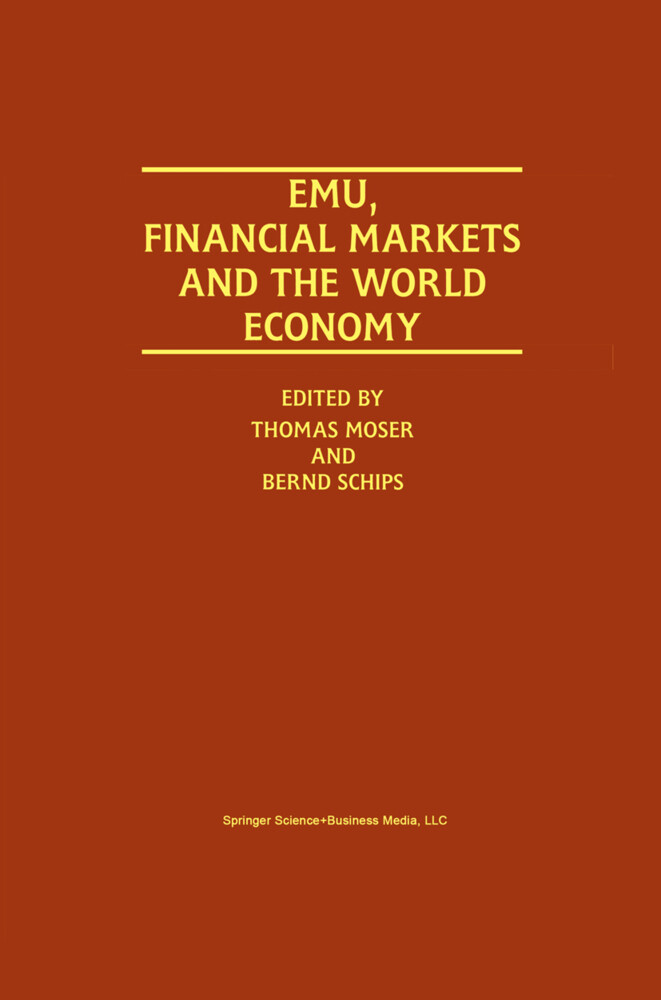 Softcover reprint of hardcover 1st ed. 2001. Paperback. Sprache: Englisch.
Buch (kartoniert)
This book is based on the conference "EMU and the Outside World", held at the Swiss Federal Institute of Technology (ETH), December 11, 1998. The conference was organized by the Swiss Institute for Business Cycle Research (KOF), which is supported jo … weiterlesen
Dieser Artikel ist auch verfügbar als:
Geschenk per Mail versenden
Buch (kartoniert)

This book is based on the conference "EMU and the Outside World", held at the Swiss Federal Institute of Technology (ETH), December 11, 1998. The conference was organized by the Swiss Institute for Business Cycle Research (KOF), which is supported jointly by the ETH and the Swiss Society for Business Cycle Research (SGK), an organization comprising representatives from private industry, the Swiss National Bank and public authorities. On the eve of the final stage of European Economic and Mone­ tary Union (EMU), Zurich seemed to be a particularly appropriate place for such a conference. On the one hand, given its location and economic and financial links with the euro area, Switzerland is one of the "outside coun­ tries" most affected by EMU. On the other hand, it was nowhere else than in Zurich where the vision of "a United States of Europe" was expressed for the first time by Winston Churchill in his speech on September 19, 1946. For many EMU is a step in that direction, whether welcome or not. Most of the papers appearing in this volume were presented at the con­ ference and have been revised and updated. Three contributions, chapter 11- 13, were commissioned specially for this publication. Besides the authors of the chapters, special thanks are due to Guido Boller, Robert McCauley, Umberto Schwarz, and Charles Wyplosz.

Contributors. Preface. 1. EMU, Financial Markets and the World Economy: An Overview; T. Moser, B. Schips. Part I: EMU and the International Monetary System. 2. How Does EMU Affect the Dollar and the Yen as International Reserve and Investment Currencies? M. Frenkel, J. Søndergaard. 3. May the Euro Increase Exchange Rate Volatility? J. Creel and H. Sterdyniak. 4. EMU and Transatlantic Exchange Rate Stability; A. Bénassy-Quéré and B. Mojon. 5. A Game Theoretical Approach to Monetary Policy: What Strategy for the ECB? A. Fourçans, T. Warin. Part II: EMU and European Capital Markets. 6. The Impact of Diversification Opportunities in European Capital Markets; G. Santry, S. Stevenson. 7. Bank Portfolios in Euroland; C.M. Buch, S. Lapp. 8. Financial Markets and the Euro; V.A. Canto, R.I. Webb. Part III: EMU and Macroeconomic Policy. 9. Symmetry or Asymmetry in European Dollar Policies? Evidence from the Core Countries; L. Cavallari, G. De Arcangelis. 10. Monetary Integration and the Value of Waiting; F. Strobel. 11. International Spillovers of Macroeconomic Shocks: A Quantitative Exploration; D. Laxton, E.S. Prasad. 12. Fiscal Policy under EMU: An Overview; B. van Aarle. Part IV: EMU and Countries Outside the Euro Area. 13. Business Cycles in Switzerland: An Empirical Analysis of the German and the U.S. Effects; Y.-W. Cheung, F. Westermann. 14. Getting Fit for the EU: A Currency Board for Poland; A. Freytag. 15. Eastern Europe and the Euro Area; A. Rusek. 16. Will the Euro Hurt Industrializatikon of Europe's Southern Trading Partners? Evidence from Industrial Panel Data; J.-F. Ruhashyankiko. 17. EMU, Euro and EU-Membership: An Evaluation from the Turkish Macroeconomic Perspective; A. Kibritço&gbreve;lu. Index.

Thomas Moser is a staff economist at the central bank of Switzerland, and a lecturer of economics at the University of Zurich, Switzerland.

Bernd Schips is a Professor of Economics at the Swiss Federal Institute of Technology (ETH) in Zurich, Switzerland, and Director of the Institute for Business Cycle Research (KOF) at the ETH. He is a member of the advisory board of IFO-Institute, Munich, Germany, and of the Centre for European Economic Research (ZEW) at the University of Mannheim, Germany.
Kunden, die diesen Artikel gekauft haben, kauften auch
Schreiben Sie eine Rezension