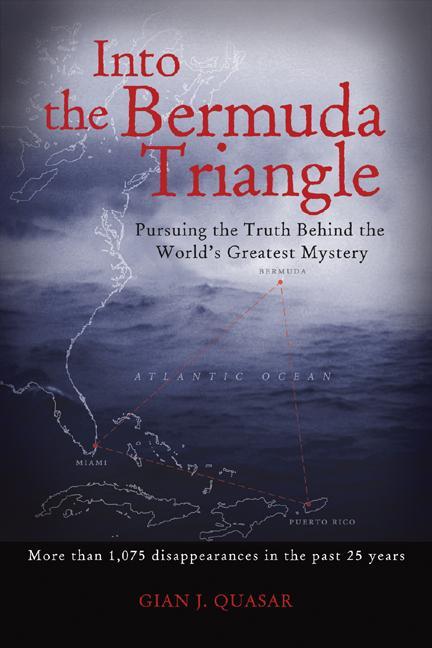 Into the Bermuda Triangle

Still unsolved, still baffling, still claiming new victims. Here are the untold stories.A pilot reports a strange haze enveloping his plane, then disappears; eleven hours after fuel starvation, as if calling from a void, he is heard 600 miles away. He requests permission to land, then vanishes forever. A freighter steaming over placid seas disappears without a trace. A pleasure yacht ghosts past without a soul on board. A pilot calls for help because a "weird object" is harassing his plane. A jet collides with an "unknown" and is never found. . . .Into the Bermuda Triangle is the first comprehensive examination of these baffling disappearances in more than a generation. Drawing on official reports from the NTSB and other investigative agencies as well as interviews with scientists, theorists, and survivors, leading authority Gian Quasar not only sets the record straight on previously examined cases, he also offers a bulging file of new cases, the collective results of his twelve-year investigation. In meticulous detail this unflinching account:In this age of technological and scientific discovery, there are still mysteries that transcend understanding. The Bermuda Triangle is one."The best book I've ever read on this important subject."-Andrew Griffin, The Town Talk

1. The Bermuda Triangle: A Riddle at a Nearby Shore2. The Riddle of Missing Planes3. The Riddle of Vanished Ships4. Can It Be That Simple?5. Those Who Lived to Tell6. Space-Time Vortices, Zero-Point, and Sunken Worlds7. Clues from a Shifting Paradigm8. Atyantica9. The Warnings of Lunar and Martian Anomalies10. Interest from a Past World?11. Let the Oceans Speak12. A Vast Horizon: An Answer from Without, Within, and All Around UsNotesBibliographyAcknowledgmentsIndex

Gian Quasar's research began over a decade ago, and he has compiled the largest private repository of reports and official maritime documents, containing over 220 cases spanning more than two centuries. Over 100 of these disappearances have occurred in the past 25 years. His tenacity in unearthing every scrap available has gained him popular recognition as the man responsible for bringing the subject forward to a new generation. He and his work have been the subject of one-hour episodes on the History Channel, a show on TLC (Bermuda Triangle Mystery Solved?), a show on Discovery (Inside the Bermuda Triangle), and a show on the Travel Channel (World of Mysteries: The Bermuda Triangle), among others. He has been featured on TV internationally, appearing on TVN Poland, ITC Britain, and Mega TV Greece. Additionally, he has been a guest on numerous radio shows and has written for Avenger Magazine, and Boy's Life.