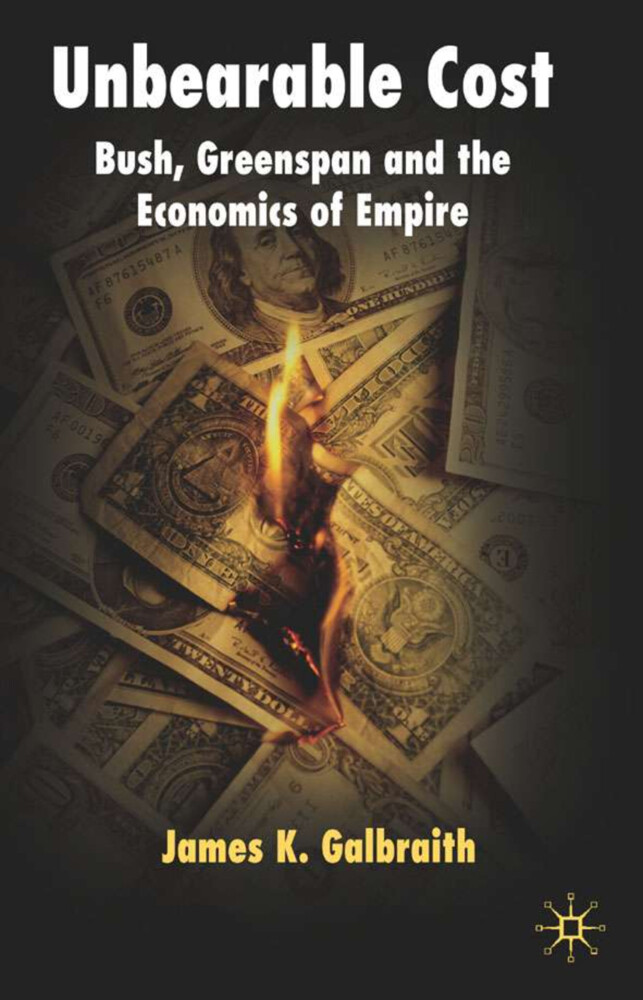 von James K. Galbraith
Bush, Greenspan and the Economics of Empire. Auflage 2006. Paperback. Sprache: Englisch.
Buch (kartoniert)
This work contains James K. Galbraith's most influential recent writings on current affairs along with new commentary, and explores both the descent to disaster in Iraq and the ongoing transformation of the American economy under the steerage of Alan … weiterlesen
Geschenk per Mail versenden
Buch (kartoniert)

This work contains James K. Galbraith's most influential recent writings on current affairs along with new commentary, and explores both the descent to disaster in Iraq and the ongoing transformation of the American economy under the steerage of Alan Greenspan.

Introduction Acknowledgements Permissions PART 1: ABOUT BUSH Corporate Democracy; Civic Disrespect Lies, Dumb Lies, and Sample Statistics Defending Democrats...and Democracy Tracking Down the Corporate Crooks The Realities of Resistance Why Bush Likes a Bad Economy Bush's Hail Mary The Plutocrats Go Wild Dissecting Cheney Waiting to Vote Abolish Election Day Democracy Inaction The Floodgates Have Opened PART 2: ABOUT WAR National Defense The Future Oil War The Cheney Doctrine The Unbearable Costs of Empire The Paramilitary Mind What Economic Price This War? Still Wrong: Why Liberals Should Keep Opposing the War Don't Blame Rumsfeld, Blame Bush The Iraqi Quagmire War and Economy Don't Wear Well How You Will Pay for the War The Economics of the Oil War Boom Times for War, Inc. The Gambler's Fallacy Withdrawal Symptoms PART 3: ABOUT GREENSPAN Back To the Cross of Gold Greenspan's Error The Free Ride of Mr Greenspan There's Some Good News That's Bad News Greenspan's Whim Greenspan's Glasnost The Butterfly Effect The Credit, Where Credit is Due Stop the Sabotage Coming from the Fed The Charge of the Fed Brigade We Cannot Have Discipline, So We Must Have Pain The Swiss Guard Watching Greenspan Grow The Man Who Stayed Too Long Bernankenstein's Monster PART 4: ABOUT THE ECONOMY I Don't Want To Talk About It The Sorcerer's Apprentices Is the New Economy Rewriting the Rules? So Long, Wealth Effect Incurable Optimists Enron and the Next Revolution Share Revenue, Save Jobs Hangover In America The Big Fix: The Case for Public Spending Bush's Tax Package and Economic Reality Cashing Out Bankers Versus Base Keeping It Real for the Voters Dazzle Them With Demographics Social Security Scare Campaign Apocalypse Not Yet Taming Predatory Capitalism Index

JAMES K. GALBRAITH holds the Lloyd M. Bentsen Jr. Chair in Government/Business Relations at the Lyndon B. Johnson School of Public Affairs, University of Texas at Austin, USA, and a Professorship in the Department of Government. He is Senior Scholar with the Levy Economics Institute and Chair of the Board of Economists for Peace and Security, a global network of professional economists. He served as Executive Director of the Joint Economic Committee of the United States Congress in the early 1980s.

'Galbraith for the Twenty-first century! Prescient, lucid, elegant. Where others are lost groping in the shadows, James K. Galbraith sees the big picture. His writing is like a torch that guides us through the cave of the present into the light.' - Sidney Blumenthal, formerly Senior Advisor to President Clinton and author of The Clinton Wars

'The reason Jamie Galbraith is such an important writer is because he asks the right questions. You would be amazed at the number of people who pass for pundits or even sages who can't hit the backboard with a question, much less hit the net. That Galbraith knows the answers too strikes me less

impressive. He is after all, an economist and a political scientist and an

academic; he's supposed to know these things. He even did time in the

bowels of congress and so knows how it actually works. Galbraith's writing

is crisp, funny, and incisive. Krugman, move over, Galbraith is here.' -

Molly Ivins is a syndicated columnist, co-author of Bushwhacked: Life in

George Bush's America, and a fellow of the American Academy of Arts and