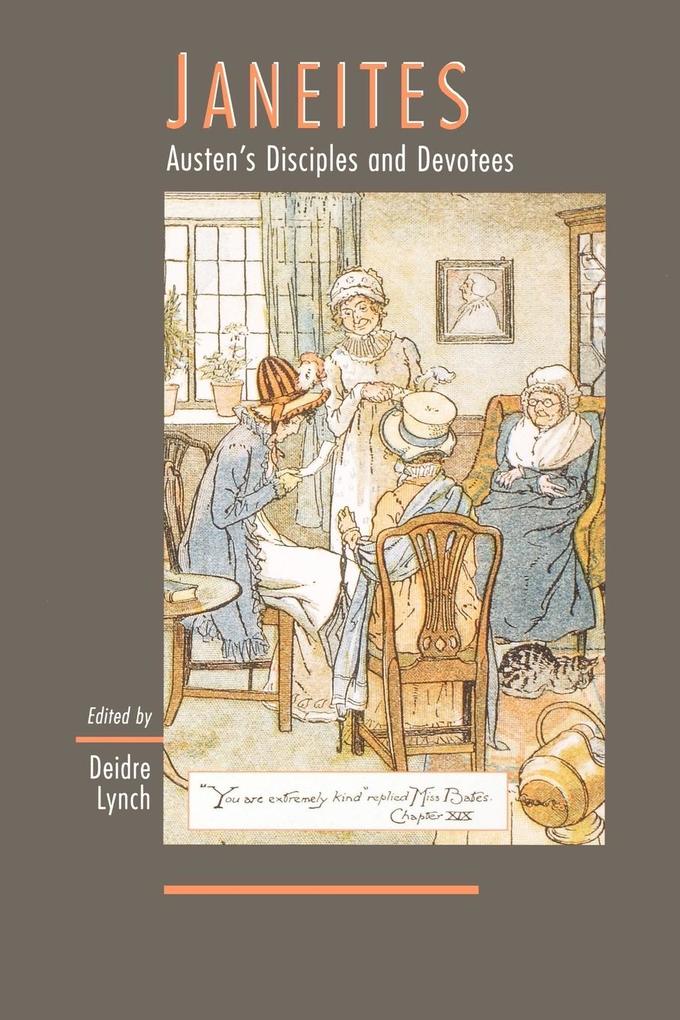 Austen's Disciples and Devotees. Paperback. Sprache: Englisch.
Buch (kartoniert)
Over the last decade, as Jane Austen has moved center-stage in our culture, onto best-seller lists and into movie houses, another figure has slipped into the spotlight alongside her. This is the "Janeite," the zealous reader and fan whose devotion to … weiterlesen
Dieser Artikel ist auch verfügbar als:
Geschenk per Mail versenden
Buch (kartoniert)

Over the last decade, as Jane Austen has moved center-stage in our culture, onto best-seller lists and into movie houses, another figure has slipped into the spotlight alongside her. This is the "Janeite," the zealous reader and fan whose devotion to the novels has been frequently invoked and often derided by the critical establishment. Jane Austen has long been considered part of a great literary tradition, even legitimizing the academic study of novels. However, the Janeite phenomenon has not until now aroused the curiosity of scholars interested in the politics of culture. Rather than lament the fact that Austen today shares the headlines with her readers, the contributors to this collection inquire into why this is the case, ask what Janeites do, and explore the myriad appropriations of Austen--adaptations, reviews, rewritings, and appreciations--that have been produced since her lifetime.


The articles move from the nineteenth-century lending library to the modern cineplex and discuss how novelists as diverse as Cooper, Woolf, James, and Kipling have claimed or repudiated their Austenian inheritance. As case studies in reception history, they pose new questions of long-loved novels--as well as new questions about Austen's relation to Englishness, about the boundaries between elite and popular cultures and amateur and professional readerships, and about the cultural work performed by the realist novel and the marriage plot.

Acknowledgments vii A Note to the Reader ix Introduction: Sharing with Our Neighbors by Deidre Lynch 3 1. The Divine Miss Jane: Jane Austen, Jancites, and the Discipline of Novel Studies by Claudia L. Johnson 25 2. Jane Austen's Friendship by Mary Ann O'Farrell 45 3. Sensibility by the Numbers: Austen's Work as Regency Popular Fiction by Barbara M. Benedict 63 4. Austen's Earliest Readers and the Rise of the Janeites by William Galperin 87 5. Decadent Austen Entails: Forster, James, Firbank, and the "Queer Taste" of Sanditon (comp. 1817, publ. 1925) by Clara Tuite 115 6. The Virago Jane Austen by Katie Trumpener 140 7. Free and Happy: Jane Austen in America by Mary A. Favret 166 8. In Face of All the Servants: Spectators and Spies in Austen by Roger Sales 188 9. Jane Austen and Edward Said: Gender, Culture, and Imperialism by Susan Fraiman 206 Notes on Contributors 225 Index 227

"Written with much scholarly dedication and good humor ... Accessible, well documented, carefully written generally argot-free, and convincing ..."--Choice "Although Janeites is written by professionals and thus, perhaps, is not for every amateur enthusiast, anyone who can read Jane Austen's sophisticated prose will be able to read these essays."--James R. Aubrey, Bloomsbury Review "Janeites is a groundbreaking book."--Devoney Looser, Eighteenth-Century Studies "Lynch ... reveals how [Austen] has inspired a wide range of readers, from those seeking a friend to those searching for relief from the horrors of war... [The book is] illuminating and scrupulously researched: readers will be pleased to see a picture of the eighteenth and nineteenth centuries brimming with women writers, artists, workers, and entrepreneurs populating and influencing the public sphere."--Jill Heydt-Stevenson, The Wordsworth Circle "Compelling and engaging... [A] significant contribution to Austen studies, and more broadly to cultural studies of the novel."--Amanda Gilroy, Novel