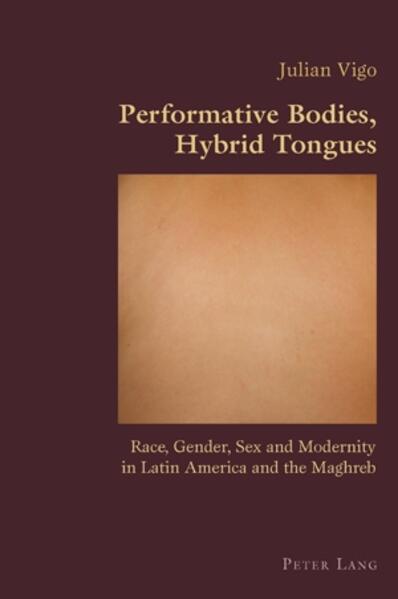 Race, Gender, Sex and Modernity in Latin America and the Maghreb.
Sprache: Englisch.

This book reconsiders the body in literature and makes a case for visual representation as a physical and gesticulative domain for rethinking the constructions of gender, nationalism and sexuality. Examining literary production from the eleventh century until the present, the author argues that the body in contemporary North Africa and Latin America serves as a physical and symbolic terrain upon which sexual, textual, national, racial and linguistic identities are vectored and through which postcolonial and hegemonic antagonisms of power and identity are resolved.
Rather than embracing «third world» identity as a residual repository of western thought, colonization and linguistic infusion, the author suggests that the paradigm of cultural identity in the Maghreb and Latin America is best understood through an examination of the emergent corporeal articulations of subjectivity prevalent in these literatures and visual cultures. The text examines the body as a critical landscape through which the various discourses of nationhood, gender and sexuality converge in order to construct a reading of the social that neither amasses subjectivity as singular under the rubric of the «third world», nor couches the other within static notions of gendered, sexual or racial identities.

Contents: The Erasure of Language and the Production of Meaning Western Theories of Gender and Sex: Performative or Real? Language and the Body in Barthes, Khatibi and Sarduy: The Intertextual and Intersexual The Body of Fitna and the Intractable Feminine: Exile, Nomadism, Memory and the Bi-langue in Maghrebian Literature The Violence of Representation in Latin American Literature: Realismo mágico and Neobarroco Bodies of Gender, Race, Sickness and Terror Hybrid Bodies and Border Crossings: Nationalism and Modernity in Morocco and Mexico.

The Author: Julian Vigo is Assistant Professor of Comparative Literature at the Université de Montréal. She teaches visual anthropology, comparative literature, performance studies, cultural theory, theories of modernity and postmodernity and gender studies. In addition to her academic research and teaching she is also an installation and video artist and has made ethnographic film and video in Latin America, the Middle East, the Maghreb, Europe and the United States since 1988.
Kunden, die diesen Artikel gekauft haben, kauften auch