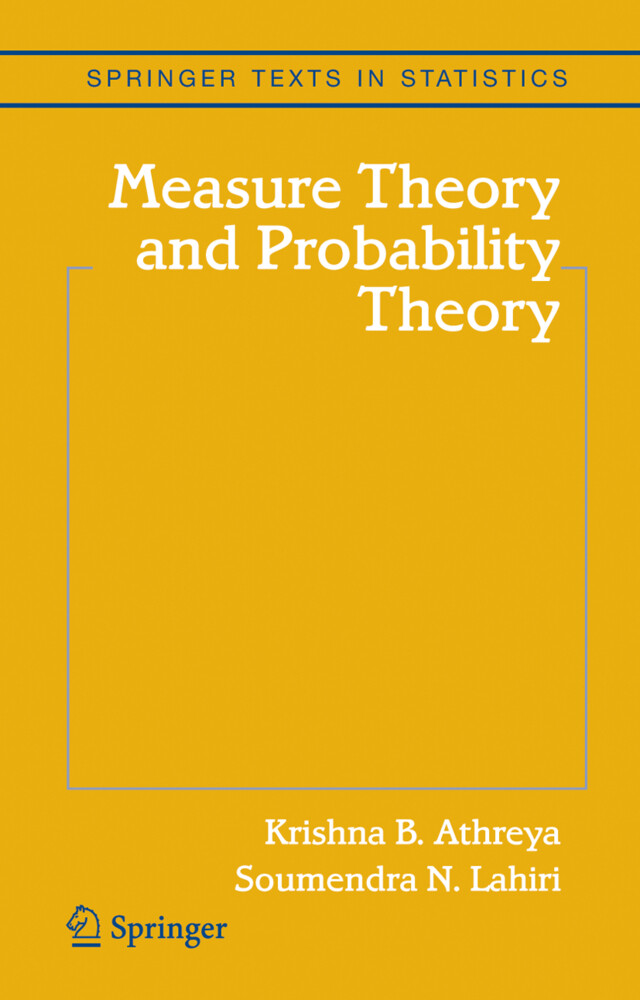 This book arose out of two graduate courses that the authors have taught duringthepastseveralyears;the?rstonebeingonmeasuretheoryfollowed by the second one on advanced probability theory. The traditional approach to a ?rst course in measure theory, such as in Royden (1988), is to teach the Lebesgue measure on the real line, then the p di?erentation theorems of Lebesgue, L -spaces on R, and do general m- sure at the end of the course with one main application to the construction of product measures. This approach does have the pedagogic advantage of seeing one concrete case ?rst before going to the general one. But this also has the disadvantage in making many students perspective on m- sure theory somewhat narrow. It leads them to think only in terms of the Lebesgue measure on the real line and to believe that measure theory is intimately tied to the topology of the real line. As students of statistics, probability, physics, engineering, economics, and biology know very well, there are mass distributions that are typically nonuniform, and hence it is useful to gain a general perspective. This book attempts to provide that general perspective right from the beginning. The opening chapter gives an informal introduction to measure and integration theory. It shows that the notions of ?-algebra of sets and countable additivity of a set function are dictated by certain very na- ral approximation procedures from practical applications and that they are not just some abstract ideas.

"...There are interesting and non-standard topics that are not usually included in a first course in measture-theoretic probability including Markov Chains and MCMC, the bootstrap, limit theorems for martingales and mixing sequences, Brownian motion and Markov processes. The material is well-suported with many end-of-chapter problems." D.L. McLeish for Short Book Reviews of the ISI, December 2006

"The reader sees not only how measure theory is used to develop probability theory, but also how probability theory is used in applications. ... The discourse is delivered in a theorem proof format and thus is better suited for classroom ... . The authors prose is generally well thought out ... . will make an attractive choice for a two-semester course on measure and probability, or as a second course for students with a semester of measure or probability theory under their belt." (Peter C. Kiessler, Journal of the American Statistical Association, Vol. 102 (479), 2007)

"The book is a well written self-contained textbook on measure and probability theory. It consists of 18 chapters. Every chapter contains many well chosen examples and ends with several problems related to the earlier developed theory (some with hints). ... At the very end of the book there is an appendix collecting necessary facts from set theory, calculus and metric spaces. The authors suggest a few possibilities on how to use their book." (Kazimierz Musial, Zentralblatt MATH, Vol. 1125 (2), 2008)

"The title of the book consists of the names of its two basic parts. The book's third part is comprised of some special topics from probability theory. ... The authors suggest using the book in two-semester graduate programs in statistics or a one-semester seminar on special topics. The material of the book is standard ... is clear, comprehensive and 'without being intimidating'." (Rimas Norvaisa, Mathematical Reviews, Issue 2007 f)

"Probabilists have a special relationship to measure theory. ... The style of writing is clear and precise ... . Its wide range of topics and results makes Measure Theory and Probability Theory not only a splendid textbook but also a nice addition to any probabilist's reference library. ... a researcher in need of a reference work, or just somebody who wants to learn some measure theory to lighten up your life, Measure Theory and Probability Theory is an excellent text that I highly recommend." (Peter Olofsson, SIAM Review, Vol. 49 (3), 2007)