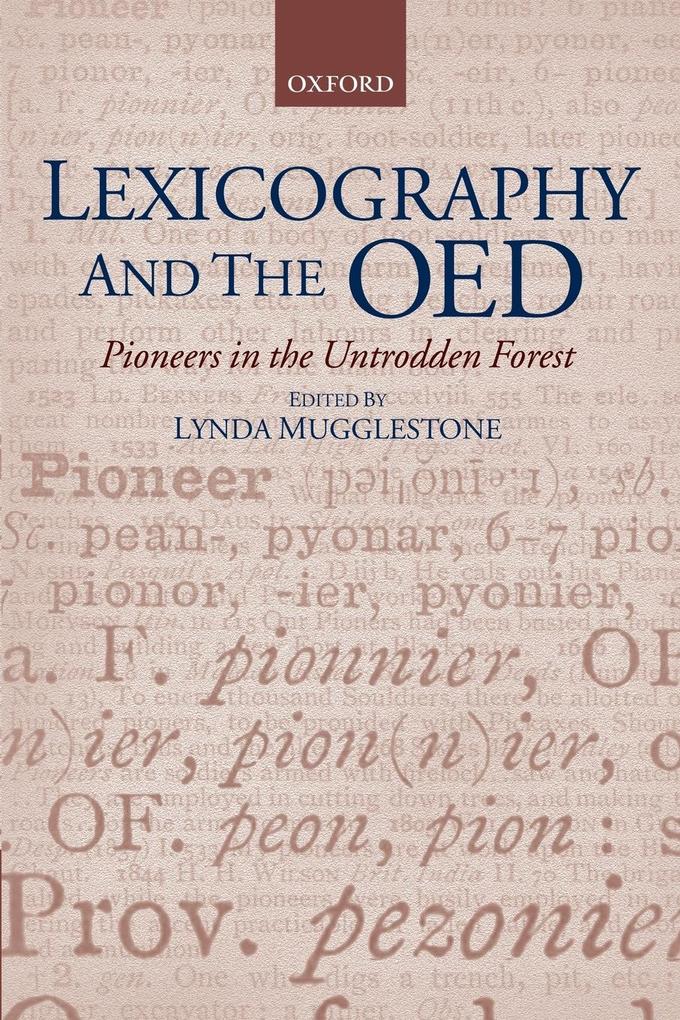 Lexicography and the OED

Pioneers in the Untrodden Forest. Paperback. Sprache: Englisch.
Buch (kartoniert)
The Oxford English Dictionary occupies a special place in the history of English, cultural as well as linguistic. This collection sets out to explore the pioneering endeavors in both lexicography and lexicology which led to the making of its first ed … weiterlesen
Geschenk per Mail versenden
Buch (kartoniert)

Titel: Lexicography and the OED

The Oxford English Dictionary occupies a special place in the history of English, cultural as well as linguistic. This collection sets out to explore the pioneering endeavors in both lexicography and lexicology which led to the making of its first edition. Making use of much unpublished archive material, the essays brings a wide variety of perspectives to bear upon the OED, and the particular problems posed by the attempt to break new ground in its formation.

1. 'Pioneers in the Untrodden Forest': The New English Dictionary; 2. Making the OED: Readers and Editors. A Critical Survey; 3. OED Sources; 4. Murray and his European Counterparts; 5. Time and Meaning: Sense and Definition in the OED; 6. The Compass of the Vocabulary; 7. Words and Word-Formation: Morphology in OED; 8. OED and the Earlier History of English; 9. The Vocabulary of Science in the OED; 10. Pronunciation in the OED; 11. 'An Historian not a Critic': The Standard of Usage in the OED; 12. 'This Unique and Peerless Specimen': The Reputation of the OED; Appendix 1. OED Sections and Parts; Appendix 2. OED Personalia; Appendix 3. The OED and the Public

Lynda Mugglestone is Fellow in English Language and Literature at Pembroke College, Oxford, and News International Lecturer in Language and Communication. She has written widely on nineteenth-century language and associated issues - literary and linguistic, as well as lexicographic.

...this collection gives some fascinating insights into the making of the OED and is an essential reading for lexicographers and students of English (historical) linguistics. Marcus Callies, eLanguage This volume provides an excellent scholarly assessment of the contribution of the OED and suggests many potentially fruitful areas for further research. LinguistList The authors adopt a range of linguistic approaches and frequently draw upon unpublished materials in the archives of Oxford University Press and the Murray papers ... Lynda Mugglestone provides an introduction to the volume by considering the achievement of the OED within its historical context ... This introduction provides a fascinating survey of the kinds of problems Murray and his associates were faced with on a daily basis. LinguistList Lexicography and the OED justifiably claims to be "the most wide-ranging account yet published of the creation of one of the great canonical works of the 20th century ... This study is an essential acquisition for lexicographers, language scholars and researchers. Indeed, anyone with a passion for the English language and a basic knowledge of the history of the OED will find much of interest within these pages. Richard Boyle, Times Higher Education Supplement