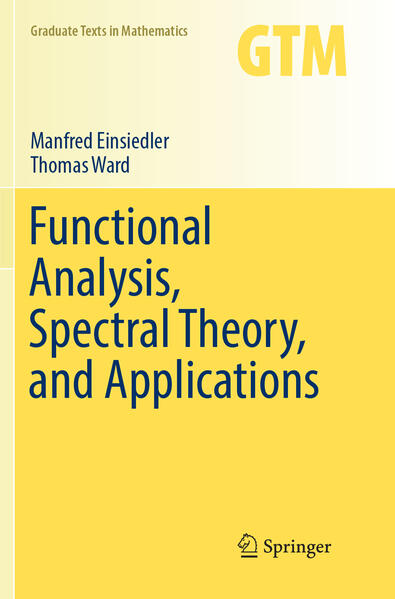 This textbook provides a careful treatment of functional analysis and some of its applications in analysis, number theory, and ergodic theory.

In addition to discussing core material in functional analysis, the authors cover more recent and advanced topics, including Weyl's law for eigenfunctions of the Laplace operator, amenability and property (T), the measurable functional calculus, spectral theory for unbounded operators, and an account of Tao's approach to the prime number theorem using Banach algebras. The book further contains numerous examples and exercises, making it suitable for both lecture courses and self-study.

Functional Analysis, Spectral Theory, and Applications is aimed at postgraduate and advanced undergraduate students with some background in analysis and algebra, but will also appeal to everyone with an interest in seeing how functional analysis can be applied to other parts of mathematics.

Manfred Einsiedler studied mathematics at the University of Vienna and has been a Professor at the ETH Zürich since 2009. He was an invited speaker at the 2008 European Mathematical Congress in Amsterdam and the 2010 International Congress of Mathematicians in Hyderabad. His primary research area is ergodic theory with connections to number theory. In cooperation with Lindenstrauss and Katok, Einsiedler made significant progress towards the Littlewood conjecture.   Thomas Ward studied mathematics at the University of Warwick and is Deputy Vice-Chancellor for student education at the University of Leeds. He works in ergodic theory and number theory, and has written several monographs, including Heights of Polynomials and Entropy in Algebraic Dynamics with Graham Everest and Ergodic Theory: with a view towards Number Theory with Manfred Einsiedler.

"All chapters end with a very useful list of additional topics and suggestions for further reading. The book also contains an appendix on set theory and topology, another one on measure theory ... . The book is carefully written and provides an interesting introduction to functional analysis with a wealth of both classical and more recent applications." (Michael M. Neumann, Mathematical Reviews, July, 2018)

"This is an attractive new textbook in functional analysis, aimed at ... graduate students. ... the large amount of material covered in this book ... as well its overall readability, makes it useful as a reference as well as a potential graduate textbook. If you like functional analysis, teach it, or use it in your work, this book certainly merits a careful look." (Mark Hunacek, MAA Reviews, January, 2018).

"The present book is different from the usual textbooks on functional analysis: it does not only cover the basic material, but also a number of advanced topics which cannot be found in many other books on the subject. ... The text is suitable for self-study as well as for the preparation of lectures and seminars. ... this is a highly recommendable book for students and researchers alike who are interested in functional analysis and its broad applications." (Jan-David Hardtke, zbMATH 1387.46001, 2018)