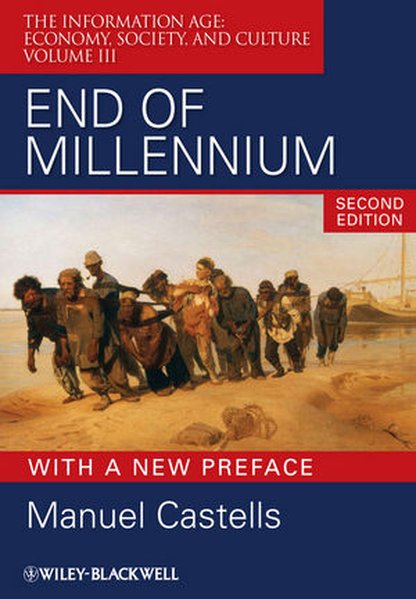 This final volume in Manuel Castells' trilogy, with a substantial new preface, is devoted to processes of global social change induced by the transition from the old industrial society to the emerging global network society. * Explains why China, rather than Japan, is the economic and political actor that is revolutionizing the global system * Reflects on the contradictions of European unification, proposing the concept of the network state * Substantial new preface assesses the validity of the theoretical construction presented in the conclusion of the trilogy, proposing some conceptual modifications in light of the observed experience

Preface to the 2010 Edition of End of Millennium.

A Time of Change.

1 The Crisis of Industrial Statism and the Collapse of the Soviet Union.

The Extensive Model of Economic Growth and the Limits of Hyperindustrialism.

The Abduction of Identity and the Crisis of Soviet Federalism.

Nationalism, Democracy, and the Disintegration of the Soviet State.

The Scars of History, the Lessons for Theory, the Legacy for Society.

2 The Rise of the Fourth World: Informational Capitalism, Poverty, and Social Exclusion.

Toward a Polarized World? A Global Overview.

The De-humanization of Africa.

Marginalization and selective integration of Sub-Saharan Africa in the informational-global economy.

Africa's technological apartheid at the dawn of the Information Age.

Za1re: the personal appropriation of the state.

Out of Africa or back to Africa? The politics and economics of self-reliance.

The inner-city ghetto as a system of social exclusion.

When the underclass goes to hell.

Globalization, Over-exploitation, and Social Exclusion: the View from the Children.

The sexual exploitation of children.

The killing of children: war massacres and child soldiers.

Why children are wasted.

The Pillage of Russia.

What are the economic consequences of the drugs industry for Latin America?

The Impact of Global Crime on Economy, Politics, and Culture.

4 Development and Crisis in the Asian Pacific: Globalization and the State.

The Changing Fortunes of the Asian Pacific.

A social model of the Japanese developmental process.

Declining sun: the crisis of the Japanese model of development.

The end of "Nagatacho politics".

Japan and the Pacific.

Beheading the Dragon? Four Asian Tigers with a Dragon Head, and their Civil Societies.

Taiwan: flexible capitalism under the guidance of an inflexible state.

Hong Kong model versus Hong Kong reality: small business in a world economy, and the colonial version of the welfare state.

The breeding of the tigers: commonalities and dissimilarities in their process of economic development.

The rise of the developmental state: from the politics of survival to the process of nation-building.

Democracy, identity, and development in East Asia in the 1990s.

Weathering the storm? China in the Asian economic crisis.

Democracy, development, and nationalism in the new China.

Conclusion: Globalization and the State.

5 The Unification of Europe: Globalization, Identity, and the Network State.

European Unification as a Sequence of Defensive Reactions: a Half-century Perspective.

The Institutionalization of Europe: the Network State.

Conclusion: Making Sense of our World.

Genesis of a New World.

The New Avenues of Social Change.

What is to be Done?

Summary of Contents of Volumes I and II.

Manuel Castells is Professor Emeritus of Sociology and Planning at the University of California, Berkeley. He is also the Wallis Annenberg Chair in Communication Technology and Society at the University of Southern California, Los Angeles, and Research Professor at the Open University of Catalonia in Barcelona. He is Distinguished Visiting Professor of Technology and Society at M.I.T., and Distinguished Visiting Professor of Internet Studies at Oxford University. He is the recipient of numerous academic awards, including the Guggenheim Fellowship, C. Wright Mills Award, the Robert and Helen Lynd Award from the American Sociological Association, and the Ithiel de Sola Pool Award from the American Political Science Association. He is a Fellow of the European Academy, a Fellow of the Spanish Royal Academy of Economics, and a Corresponding Fellow of the British Academy. He has received 14 honorary doctorates from universities around the world, and has been knighted by 5 countries. He has authored 22 books, among which is the trilogy The Information Age: Economy, Society, and Culture, first published by Blackwell in 1996-8, and translated into 20 languages.