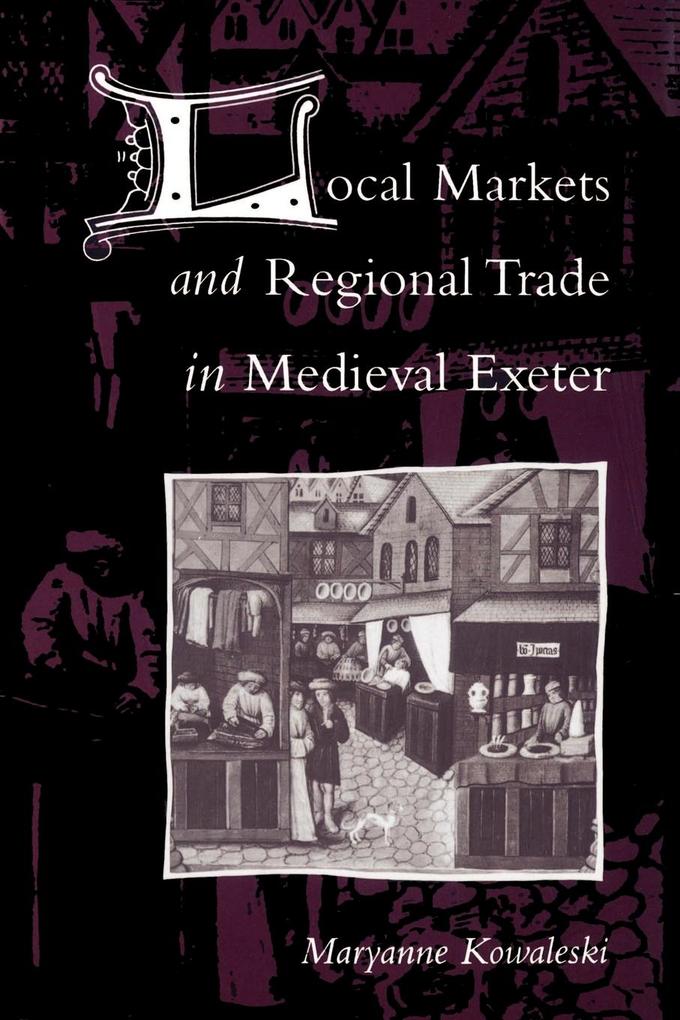 von Maryanne Kowaleski
Paperback. Sprache: Englisch.
Buch (kartoniert)
This book offers a detailed study of the types of trade that occurred in a medieval English market town. It focuses above all on the identity of buyers and sellers in late fourteenth-century Exeter, a port town that enjoyed particularly good overland … weiterlesen
Geschenk per Mail versenden
Buch (kartoniert)

This book offers a detailed study of the types of trade that occurred in a medieval English market town. It focuses above all on the identity of buyers and sellers in late fourteenth-century Exeter, a port town that enjoyed particularly good overland connections throughout south-western England. More than most town histories, it explores the dynamic relationship between town and country, and traces how the urban center linked local and regional networks of exchange.

"Historians of medieval towns and their economies have eagerly awaited Kowaleski's major study of medieval Exeter, and will no doubt be delighted by its appearance. Drawing on the extensive archives of the medieval city of Exeter and on a range of other local and national records, Kowaleski provides a meticulous and revealing study of the intimate and sensitive economic relationship between the city and its region...her work will undoubtedly stand as a model for future studies." W.M. Ormrod, The American Journal of Legal History "The book is rich in detail, comprehensive in coverage, as sensitive to questions of gender as it is to those of social and political mobility, and careful to support its arguments with the voices of the long dead as well as those of current scholarly debate. It is the kind of book we hope to see, growing in time from a good dissertation; the years of maturation, of additional scholarship, and of the broadening of interests and sympathy all show to advantage." Journal of Interdisciplinary History "...Kowaleski's meticulous research, the ingenuity of her methodology, the logic of her arguments and the power and implications of her conclusions should make this study essential reading for anyone interested in the medieval economy and the origins of modern capitalism." Businss History Review "The scholarship is meticulous, the sources multiple and vast, the writing superb, and the explanations convincing." Choice "The commercial history of medieval England is currently in the midst of a remarkable renaissance of scholarly interest...the renaissance is now enjoying its golden age. As it does so, Maryanne Kowaleski's book will undoubtedly stand as one of the age's finest monuments...one of Kowaleski's principal achievements is to combine two common approaches to commercial history, one that is site-specific, emphasizing the trade of a single town, and one that is commodity-specific, emphasizing the trade of a single good...Kowaleski's study has a significance well beyond the limits of a single town and region and raises important questions about the path of commercial development in the country as a whole." Albion "Maryanne Kowaleski's book will undoubtedly stand as one of the age's finest monuments." Albion "...this is, in many ways, a very pathbreaking work, particularly in its methodology for analysing occupational structures in urban communities and the size of urban hinterlands. Some readers will find its rigorous approach unsympathetic...but there is no doubt that it makes a substantial contribution to a better understanding of medieval urban economies and their interaction with the surrounding countryside." John Langdon, Canadian Journal of History "This is an impressive and weighty study whose author should be commended for her patience and industry." Kathryn L. Reyerson, American Historical Review "This book is the fruit of many years of research and is based on a formidable array of sources. It will surely become the definitive book on trade and ec onomy in Devon for many years to come. Its significance is far greater than that of many other regional studies...Not only has Kowaleski posed new questions that historians of other regions will want to pursue, but her discussion of sources and methodology in the three appendices has provided an invaluable guide for them to follow. This may be one of the most significant books on Medieval English economic history ro appear in recent years." Mavis Mate, The Journal of Economic History "Maryanne Kowaleski has produced an excelletn study that provids a window into the life of local market towns, especially Exeter, important as a regional market and a port." Timothy J. Runyan, The American Neptune