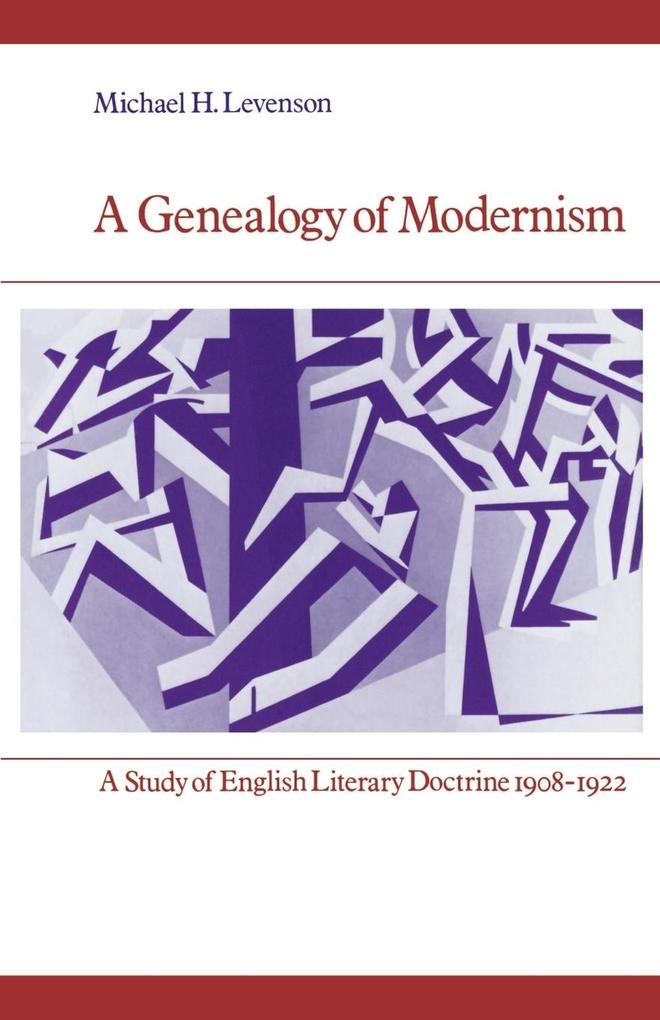 A Genealogy of Modernism

12% Rabatt³ sichern mit Gutscheincode: MAI12
​
A Geneology of Modernism is a study of literary transition in the first two decades of this century, a period of extraordinary ferment and great accomplishment, during which the avant-garde gradually consolidated a secure place within English culture … weiterlesen
Geschenk per Mail versenden
Buch (kartoniert)

A Geneology of Modernism is a study of literary transition in the first two decades of this century, a period of extraordinary ferment and great accomplishment, during which the avant-garde gradually consolidated a secure place within English culture. Michael Levenson analyses that complex process by following the successive phases of a literary movement - Impressionist, Imagist, Vorticist, Classicist - as it attempted to formulate the principles on which a new aesthetic might be founded. The emphasis here falls on the ideology of modernism, but throughout the book the ideological question is tied on the one hand to specific literary works and on the other to general movements in philosophy and the fine arts. The major figures under discussion, Joseph Conrad, Ford Madox Ford, Ezra Pound, Wyndham Lewis, and T. S. Elliot, are placed in relation to thinkers who have been largely neglected in the history of modernism: Max Stirner, Wilhelm Worringer, Pierre Lasserre, Allen Upward, and Hilaire Belloc. Levenson thus situates the emergence of a modernist aesthetic within the context of literary theory, literary practice, and cultural history.

Part I. Progenitors: 1. Consciousness: The modernist narrator on the Victorian sailing ship: Arnold, Huxley, Pater: toward a small world and a large self; 2. Authority: Arnold and Babbitt: the best self and the new humanism: Conrad: physis and psyche; Part II. Provocation, 1908-1914: 3. Dating Hulme/parsing modernism; 4. Ford: the passing of great figures: The Victorian sage in retirement: Little moderns; 5. Egoists and imagists: The Ego and His Own: Pound/Upward: Poets rampant; 6. Hulme: the progress of reaction: The classical phase: Husserl, Frege, Moore: The making of an anti-humanist; 7. Symbol, impression, image, vortex: The problem with Imagism: Impressionism and the prose tradition: In search of a primary pigment; Part III. Conclusion: 8. The war among the moderns: The avant-garde in retreat: Pound and Eliot, a counter-current; 9. The Waste Land: Speakers and ghosts: The theory of points of view: The painful task of unifying: Myth, tradition, classicism; Epilogue. The editor and the loathed disturber.

'Without such exact studies of a limited terrain the larger map of modernism can never be drawn.' A. Walton Litz, The Times Literary Supplement