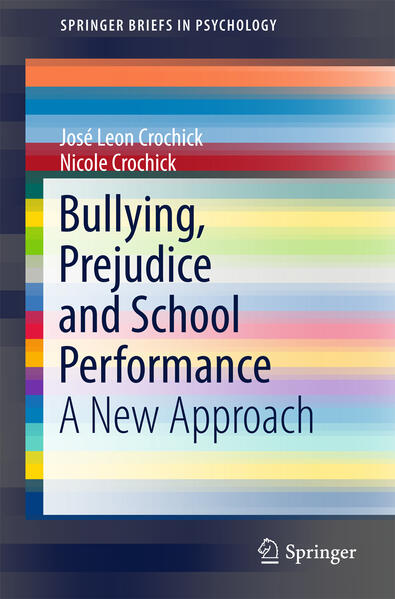 von Nicole Crochick
A New Approach. 1st ed. 2017. Sprache: Englisch.
Buch (kartoniert)
This brief presents a new approach to the study of bullying and prejudice in school settings, analyzing the particularities of these two forms of violence and relating them to the hierarchies that distinguish students based on academic performance an … weiterlesen
Dieser Artikel ist auch verfügbar als:
Geschenk per Mail versenden
Buch (kartoniert)

This brief presents a new approach to the study of bullying and prejudice in school settings, analyzing the particularities of these two forms of violence and relating them to the hierarchies that distinguish students based on academic performance and popularity. Analyzing data gathered by surveys carried out between 2010 and 2014 with 274 students from public schools of São Paulo, Brazil, the authors show that, despite bullying and prejudice are related, they have specific characteristics that need to be acknowledged in order to help educators develop more efficient initiatives to prevent them. Building upon the Critical Theory of Society especially Adorno s studies of authoritarian personality and school hierarchies the authors develop a theoretical framework that helps researchers and educators to identify the particularities of bullying and prejudice and develop specific strategies to deal with them. In addition, the empirical and theoretical elements presented in the book show how these forms of violence are related to the two hierarchies that exist side by side in schools the official hierarchy that distinguishes good and bad students based on their academic performance and the unofficial hierarchy characterized by the distinction between those who excel in dating, fighting, in team sports and those who do not excel in any of these activities.        This innovative volume:  Argues that bullying and prejudice are different forms of school violence that demand different theoretical and practical approaches  Examines data gathered by surveys carried out with 274 students of public schools in São Paulo, Brazil, between 2010 and 2014   Relates bullying and prejudice to the hierarchies that distinguish students based both on their academic performance and popularity  Analyzes the impact of factors such as autonomy from the school authority and the ideology of authoritarianism on bullying and prejudice  Presents strategies to fight bullying and prejudice in schoolsBullying, Prejudice and School Performance: A New Approach is a useful and innovative tool for psychologists, educators, sociologists, school teachers and researchers in the fields of child and school psychology, educational psychology, sociology of education and related disciplines.

Chapter 1:  School hierarchies, bullying and prejudice: a conceptual discussionSummary: The aim of this chapter is to discuss the concepts of bullying, prejudice and school hierarchy based on studies by authors from the Critical Theory of Society, mainly Theodor W. Adorno, Max Horkheimer and Herbert Marcuse. These authors did not directly study bullying, but the violence raised by the fascism of the twentieth century. Adorno discusses educational phenomena associated with violence and its combat. He exposes the existence of dual school hierarchy and how this is associated with violence itself and social discrimination. Based on these authors, the chapter will also discuss the concepts of autonomy and authoritarianism. This discussion is associated with a recent research on bullying and its relations with the popularity of students and school performance. This chapter will present the theoretical basis and review the literature on bullying as a basis for the proposed research and the analysis and discussion of results.Chapter 2: Objectives and research methodSummary: In this chapter, the objectives will be outlined based on the exposed discussion in the previous chapter. The methods to fulfill them will also be described, explaining the characteristics of the subjects, the scales of 'autonomy from the authority', 'school hierarchy', 'indication of colleagues' and 'bullying self indication , developed by Crochík, and the Fascism Scale developed by Adorno in his study of the authoritarian personality, together with other authors from the University of Berkeley.Chapter 3: Analysis and discussion of the survey dataSummary: This chapter will present and discuss the results of the scales applied to 274 students in their final year of elementary school II. Initially, it will be presented the relationship between school performance, bullying and prejudice; later, data obtained from the relations between bullying, prejudice, adherence to the ideology of authoritarianism and autonomy from the authority of the teacher; finally, will be exposed the main characteristics of the authors of aggression and their victims, the reasons for aggression and feelings caused to their victims.Chapter 4: Proposals to prevent school violenceSummary: In this chapter, we will summarize the main results of research and concepts exposed in the first chapter to propose ways to combat bullying at school and the existing prejudice.

José Leon Crochick is a full professor of the Psychology Institute of the University of São Paulo (USP), Brazil, where he acts as a professor of the Graduate Program in School and Developmental Psychology and editor of the journal "Psicologia USP", official publication of the Institute. An expert in prejudice, Critical Theory and education, professor Crochick is also a researcher of the Brazilian National Scientific and Technological Development Council (CNPq).  Nicole Crochick is a guidance counselor of  Elementary School II at Escola Nossa Senhora das Graças, in São Paulo, Brazil, and holds a master in School and Developmental Psychology from the University of São Paulo (USP).
Kunden, die diesen Artikel gekauft haben, kauften auch
Schreiben Sie eine Rezension