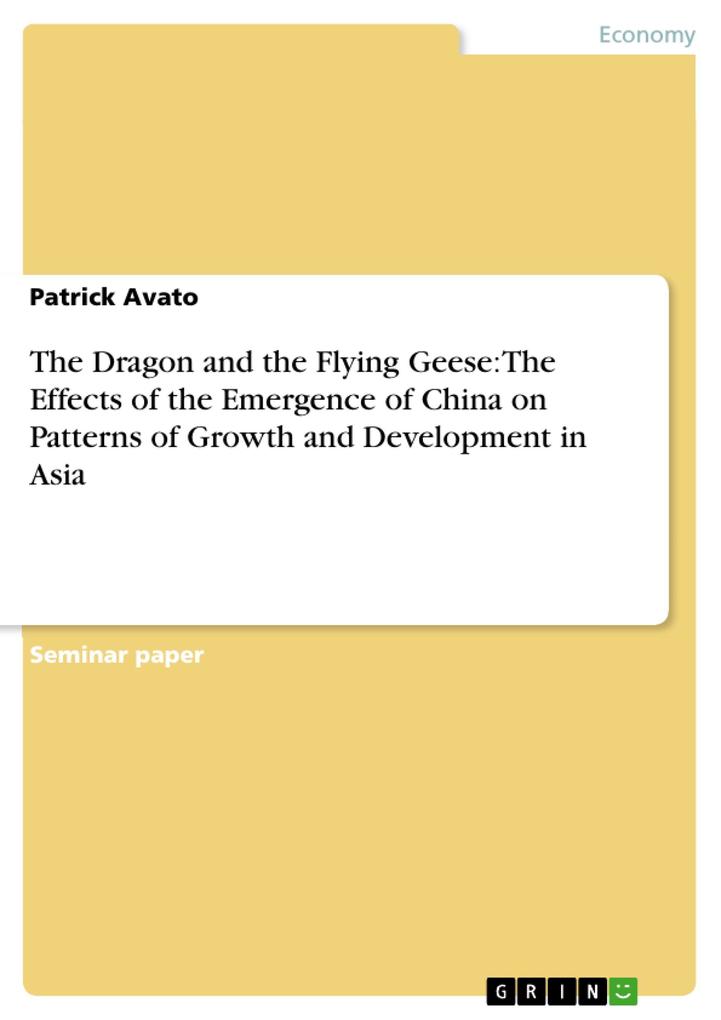 The Dragon and the Flying Geese: The Effects of the Emergence of China on Patterns of Growth and Dev

Titel: The Dragon and the Flying Geese: The Effects of the Emergence of China on Patterns of Growth and Dev
Autor/en: Patrick Avato

Seminar paper from the year 2006 in the subject Economics - International Economic Relations, grade: A+, Johns Hopkins University (School of Advanced International Studies (SAIS), ), course: Asian Economic Dynamics, 31 entries in the bibliography, language: English, abstract: For the past 30 years, Asian economies have been the world's envy as they have surpassed practically every other region in terms exports and economic growth. The remarkable development of various Asian countries has drawn millions of people out of poverty and created some of the wealthiest and most competitive economies in the world. Much of this success has been attributed to a distinctly Asian development model that combines high work ethics with an exceptional emphasis on savings and high rates of investment in both infrastructure and human capital. Moreover, the Asian Miracle was also facilitated by the extraordinary complementarily of resources, stages of development and policies of Asian countries. This complementarily made possible a pattern of development known as the Flying Geese model, in which capital, technologies and know-how trickled down, first from Japan to the Tiger economies (Taiwan, Korea, Singapore and Hong Kong) and then to the Aspirant Tigers of Southeast Asia (Thailand, Malaysia, Indonesia and the Philippines), fostering economic development throughout the region. During the 1990s, however, this picture changed abruptly. First, a real estate and equity bubble developed in Japan, the bursting of which dragged Japan into a decade long economic crisis. Second, China emerged as a major player in the world economy as her strategy of opening up to FDI and redirecting economic activity towards exports began to pay off. In the following paper, I analyze how the spectacular rise of China has affected the patterns of Asian economic dynamics since the early 1990s. In particular, I focus on the question weather the win-win situation of economic complementarily of the past has given way to a zero sum competitive game in which the Asian economies fiercely compete for the same FDI inflows and the same export markets.
Kunden, die diesen Artikel gekauft haben, kauften auch
Schreiben Sie eine Rezension

Schreiben Sie eine Bewertung für: The Dragon and the Flying Geese: The Effects of the Emergence of China on Patterns of Growth and Dev