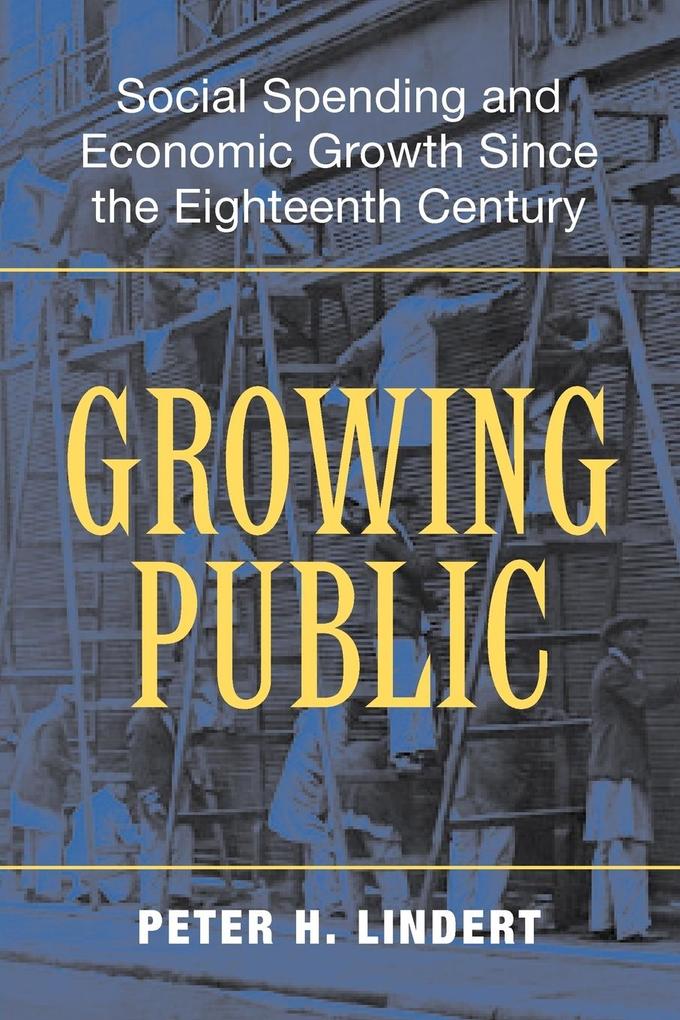 von Peter H. Lindert
Social Spending and Economic Growth Since the Eighteenth Century. 2. Auflage. Paperback. Sprache: Englisch.
Buch (kartoniert)
Growing Public examines the question of whether social policies that redistribute income impose constraints on economic growth. Taxes and transfers have been debated for centuries, but only now can we get a clear view of the whole evolution of social … weiterlesen
Dieser Artikel ist auch verfügbar als:
Geschenk per Mail versenden
Buch (kartoniert)

Growing Public examines the question of whether social policies that redistribute income impose constraints on economic growth. Taxes and transfers have been debated for centuries, but only now can we get a clear view of the whole evolution of social spending. Lindert argues that, contrary to the intuition of many economists and the ideology of many politicians, social spending has contributed to, rather than inhibited, economic growth.

Part I. Overview: 1. Patterns and puzzles; 2. Findings; Part II. The Rise of Social Spending: 3. Poor relief before 1880; 4. Interpreting the patterns of early poor relief; 5. The rise of mass public schooling before 1914; 6. Public schooling in the twentieth century: what happened to American leadership?; 7. Explaining the rise of social transfers since 1880; Part III. Prospects for Social Transfers: 8. The public pension crisis; 9. Social transfers in the second and third worlds; Part IV. What Effects on Economic Growth?: 10. Keys to the free-lunch puzzle; 11. On the well-known demise of the Swedish Welfare State; 12. How the keys were made: democracy and cost control.

'... a monumental history of two centuries of social spending ...' The Economist '... an important new book ...' Robert J. Samuelson, Newsweek 'Peter Lindert has written a dazzling book. He takes on one of the grand topics of economics - the rise of social spending-and offers us a remarkable combination of new data, historical insight, political analysis, and economic assessment. Amazingly, Lindert comes up with fresh, convincing, and important insights on issues that have been debated for decades. Two of Lindert's major conclusions are that the spread of democracy has historically played a pivotal role in the rise of social expenditures; and that social spending has not gravely weakened economic incentives and long-term economic growth, despite the drumbeat of criticisms from free-market devotees. Indeed Lindert concludes that 'the net national costs of social transfers, and of the taxes that finance them, are essentially zero'. This powerful book will be widely read and debated for many years to come.' Jeffrey D. Sachs, Director, The Earth Institute at Columbia University 'What determines social spending, also known as public education, also known as social security, also known as taking from the rich and giving to the poor? This question is the subject of much theoretical and empirical speculation and some moderately detailed previous work. Yet this magnificent summa by Peter Lindert blows away the field. He probes the historical and comparative rise of social spending in today's OECD countries and derives many new insights into the classic themes of social spending and elite behavior, democracy, inequality, religion, and ethnic divisions. He draws out the implications of his careful analysis for the future of the Third World and First alike. A must-read for anyone interested in big government, political economy, helping the poor, or simply the fate of human societies.' William Easterly, New York University 'Peter Lindert has given us a treatise on the economic and political forces driving social spending and of the effects of the welfare state that sweeps over time, over nations, and over disciplines. It is simultaneously comparative-political-economic history, demography, applied econometrics, political theory, and political economy. While few will agree with all of the often-surprising answers he gives to the most fundamental questions regarding the existence and the effects of public social welfare policies, no one will suggest that they are not bold and provocative. Growing Public is a most readable and insightful and, yes, irreverent volume that will be discussed by all concerned with these front-page issues.' Robert Haveman, John Bascom Emeritus Professor of Economics and Public Affairs, University of Wisconsin-Madison 'What determines how much governments spend on health, welfare, education, and social security? What effect does this social spending have on economic growth? Peter Lindert gives new answers to these big questions, in a lucid and engagingly written book that ranges across the globe and from the eighteenth century up to the current day. His surprising finding is that social spending does not slow growth, at least in western democracies, and his gem of a book will be essential reading for historians, economists, political scientists, and modern-day policy makers.' Philip T. Hoffman, Richard and Barbara Rosenberg Professor of History and Social Science, California Institute of Technology 'Growing Public offers economic historians, policy analysts, development gurus, and the general public - all of whom have reason to be deeply concerned about the growth implications of fiscal policy - the most comprehensive historical and econometric examination of the essential value of public expenditures I have seen anywhere. His lens of inquiry encompasses everything from early modern European charitable activities to the apex of the late-twentieth-century welfare state, from the 'Old Poor Law' to the rise of public schooling, from old-age pensions in the west to social transfers in the developing world. By the conclusion of this tour, the reader is left with a clear view of a world in which public expenditures on human welfare not only do no harm to national growth trajectories, but one in which investment in the infrastructure of human capital formation is itself growth-enhancing. This core finding of Lindert's exhaustive research will appear radical, perhaps even heretical, to a generation trained in neo-classical economics, but he arrives at it by employing the best of the theory and methodology of that discipline. As such it will be hard to refute.' Anne E. C. McCants, Associate Professor of History, Massachusetts Institute of Technology 'Lindert puts forward a compelling case ... his conclusions are often illuminating and controversial ... Lindert has uncovered new and tougher areas of debate as much as he has helped deal a telling blow to others.' Transfer 'These volumes are the output of a remarkably ambitious project by a senioe economic historian. ... these volumes deserve to be very widely read. They provide a tremendous historical context for present policy debates and are full of usefully provocative claimes while also providing a wealth of detail on the evolution of social spending.' Journal of Economic Inequality