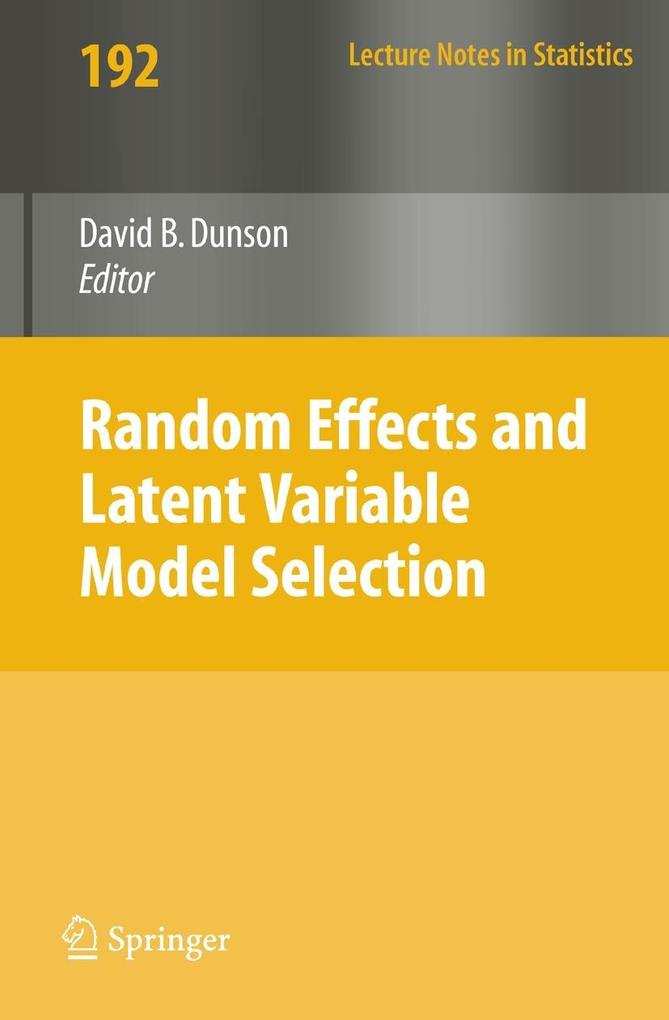 Random Effect and Latent Variable Model Selection In recent years, there has been a dramatic increase in the collection of multivariate and correlated data in a wide variety of ?elds. For example, it is now standard pr- tice to routinely collect many response variables on each individual in a study. The different variables may correspond to repeated measurements over time, to a battery of surrogates for one or more latent traits, or to multiple types of outcomes having an unknown dependence structure. Hierarchical models that incorporate subje- speci?c parameters are one of the most widely-used tools for analyzing multivariate and correlated data. Such subject-speci?c parameters are commonly referred to as random effects, latent variables or frailties. There are two modeling frameworks that have been particularly widely used as hierarchical generalizations of linear regression models. The ?rst is the linear mixed effects model (Laird and Ware , 1982) and the second is the structural equation model (Bollen , 1989). Linear mixed effects (LME) models extend linear regr- sion to incorporate two components, with the ?rst corresponding to ?xed effects describing the impact of predictors on the mean and the second to random effects characterizing the impact on the covariance. LMEs have also been increasingly used for function estimation. In implementing LME analyses, model selection problems are unavoidable. For example, there may be interest in comparing models with and without a predictor in the ?xed and/or random effects component.

From the reviews:
"This book is a collection of review papers, of developments in a young and fast-moving field. It consists of two parts; on random effects models, and factor analysis and structural equation models. Within both of these, there is the familiar divide between frequentist and Bayesian methods, which receive separate reviews. The Bayesian methods are typically more recent developments, although almost all of the material covered is from the late 1980s and beyond. ...This book offers researchers in this area several snapshots of current lines of research. Taken individually, the chapters offer concise and clear reviews of the more mature frequentist field, as well as clearly written introductions to newer Bayesian work." (Biometrics, Summer 2009, 65, 993)

"The topics are appropriate and timely. The chapters are well written and well organized. ... this book presents methods incorporating model uncertainty in random-effects and latent variable models. This concise, self-contained ... application-based volume will be beneficial to graduate students and researchers interested in both theory and application. It also is suitable as a text for a graduate seminar ... . I must commend the editor for providing a nice summary and discussion on the topics covered in the book ... I enjoyed reading it!" (Technometrics, Vol. 51 (2), May, 2009)